Salon A-3 (Hilton Chicago)
K. R. Zavadil, N. T. Hahn (Sandia National Laboratories, Joint Center for Energy Storage Research), S. DeWitt, and K. Thornton (University of Michigan, Joint Center for Energy Storage Research)
Controlling the morphology of metal anodes is required for the energy storage community to push beyond the limiting energy density of Li ion battery technology. Lithium metal and its tendency to form dendrites is one example where morphological control restricts the replacement of the limiting graphite intercalation anode.  Increased energy density and elimination of the dendrite problem are two often argued benefits for moving to a battery chemistry based on Mg as opposed to Li. Few accounts exist in the literature describing what changes in the morphology of electrochemically cycled Mg electrodes occur at relevant rates and capacities necessary for viable metal anode function.

We take on the challenge of describing morphology development and its impact at relevant electrodeposition and electrodissolution current densities (1 to 6 mA/cm2) during the first hundred cycles of a model Mg anode. In these studies, Mg electrodeposition is conducted onto Au and Pt electrodes of varying degree of orientation and texture in chloride containing ether-based electrolytes (i.e., chloroaluminate, MgCl2modified Mg complexes) to generate Mg surfaces with controlled facet populations exposed to the electrolyte. We demonstrate that substrate, electrolyte (anion and solvent), and electrodeposition parameters can be used to control the initial crystallographic orientation of these model anode films. First cycle galvanostatic stripping of a fraction of the anode film followed by atomic force microscopy and Kikuchi diffraction allows measurement of the degree of anisotropy and orientation dependence of dissolution. Analytical electron microscopy (cross-section) methods show that high rate galvanostatic cycling yields continual re-nucleation and growth of the cycled layer that readily incorporates electrolyte constituents as filmed interfaces. The altered surface energetics due to these interfaces results in the formation of voids and eventual porosity within the cycled layer. This structural evolution imposes impedance changes for that cycled layer that show up in the chronopotentiometric traces generated during cycling. We use the orientation information learned from diffraction and structural data to parameterize a phase field model that describes early stage evolution of both structure and electrochemical response. This work shows that morphology control extends to structural changes other than dendrite formation; changes that can potentially impact anode performance. The ramification of other performance limiting attributes such as porosity on lost metal capacity and lost mechanical integrity of cycled Mg will be discussed. 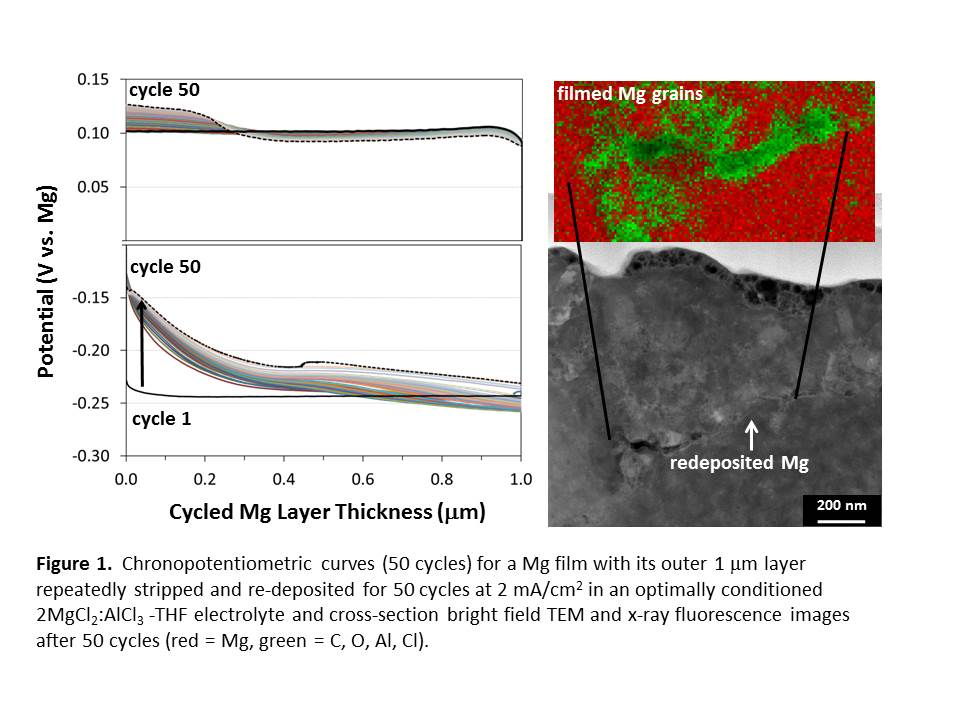