Coal is one such carbon enriched and abundantly available unconventional source. We have successfully utilized coal as carbon source to synthesize large area, transparent and high quality amorphous carbon films and graphene films7, 8. Utilizing coal to produce high quality graphene films makes it an inexpensive process. The process of producing coal-derived graphene films incorporates vacuum-CVD technique. Coal pyrolysis produces the required hydrocarbon gases that are precursors for formation of carbon species. These carbon species nucleate, and grow on copper foil to form graphene grains. The graphene grains merge together to form graphene films. These coal-derived graphene films have also been utilized as electrodes for various applications.9, 10 A detailed study of the growth mechanism of graphene films using coal as the carbon source has been investigated by using various spectroscopy, crystallography and chromatography techniques, which will be presented at the conference.

Raman spectra of coal-derived carbon films are shown in the figure. Wide D (~1350cm-1) and G (~1595cm-1) bands are observed for carbon films synthesized at low temperatures demonstrating the amorphous nature. As the synthesis temperature is increased the bands get narrower and an additional peak 2D (~2700cm-1) is observed at 1055ºC synthesis. This peak is boundary phonon mode in second order Raman spectra associated with graphene films, thus demonstrating the formation of graphene at 1055ºC.

Electro-oxidation of coal at intermediate temperatures to produce hydrogen has been utilized as an alternative to high temperature coal gasification11. The coal after the electrolysis is designated as waste (coal-char) from the coal electrolysis process. This coal-char is rich in organo-metalic compounds12. Utilizing the coal-char for producing high-value product such as graphene could further be economically favorable for scale up12. An overview of this process will also be discussed in the conference. 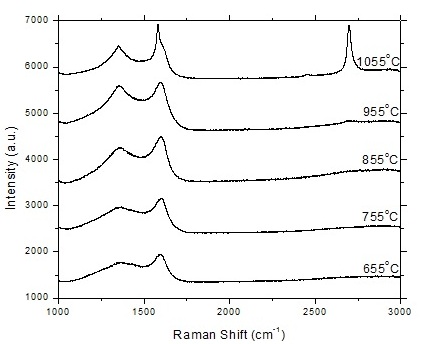