Continental Room A (Hilton Chicago)
S. Lau and L. A. Archer (Cornell University)
The aprotic Li–O2 battery offers a vast improvement in theoretical energy density up to ten times that of current Li-ion batteries, but still suffers from shortcomings in cell and material design. Some of these shortcomings stem from the large gap in understanding between fundamental studies and cell cycling experiments. In particular, it is known from computational studies that the solid Li2O2 discharge product is an electronic insulator, but SEM images of discharged cathodes show particles of Li2O2 much larger than what electron conduction and tunneling would allow. In addition, the shape of the discharge curves does not match the expected exponential resistance rise of a cell limited by electron tunneling.

In order to bridge Li2O2 properties with experimental observations, we developed a model in which Li2O2 forms as discrete particles on the cathode surface by using a combination of Kolmogorov’s statistical phase transformation theory and the atomistic nucleation theory. Nucleation rate was modeled according to a two-step process involving formation of a LiO2 intermediate. Despite its relative simplicity, the proposed model provides a near-quantitative description of empirically observed discharge curves (Figure 1). We find that the sudden potential drop at the end of discharge is caused by the reduction in active surface area as Li2O2 covers the cathode surface. Thus, the extra overpotential gained during discharge is the kinetic overpotential of the ORR rather than an ohmic overpotential through the Li2O2 bulk.

This model can be used as a guide for cathode and electrolyte design, by maximizing the amount of Li2O2 that can be collected for a given amount of electrochemically active surface area. One strategy is to promote the growth of larger Li2O2 particles. For cathodes, this means reducing the rate of nucleation by having a higher nucleation energy barrier or a lower concentration of active sites. For electrolytes, this means solvating the LiO2 intermediate to promote the superoxide disproportionation pathway. In principle, the general form of this model is applicable to any electrochemical cell that produces a solid passivation layer.

Figure 1: (a) Empirically observed discharge curves (symbols), compared with fit of the nucleation and growth model (lines). (b) Analysis of model parameters shows that they are independent of operating conditions. 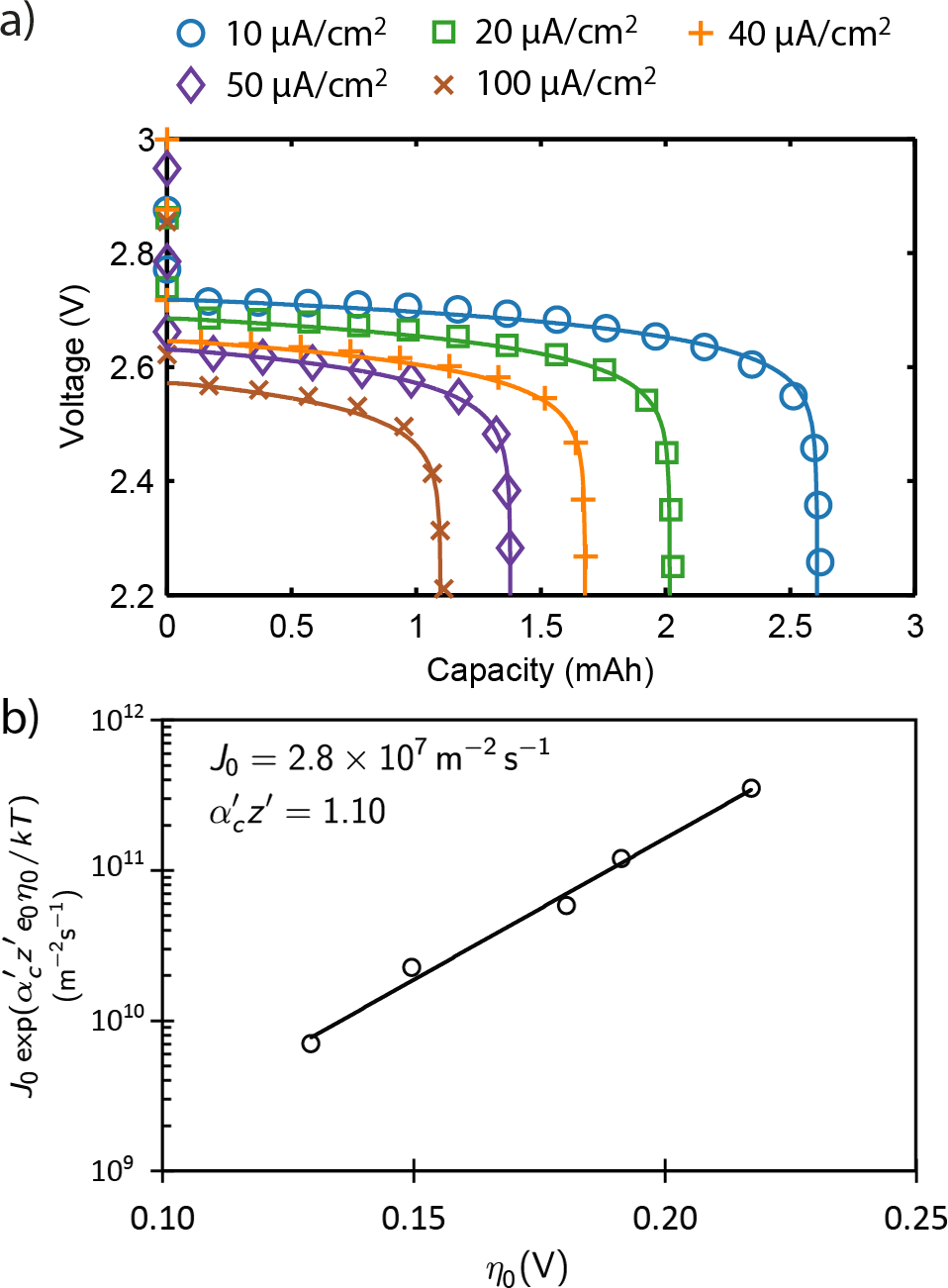