Continental Room C (Hilton Chicago)
S. Poorahong, F. Lefčvre, M. C. Perron, P. Juneau, and R. Izquierdo (Université du Québec ŕ Montréal)
A portable system to monitor water quality in both developed and developing countries is highly required. Currently, there is no commercial test available to satisfy this demand, as only accredited laboratories can perform such evaluations. Miniaturization of analytical instrumentation is one of the dominant trends within the chemical and biological sciences. Miniaturization of diagnostic devices not only affords portability and significant cost reductions but also performance gains in terms of speed, analytical efficiency, automation and reproducibility.

To address this issue, a phytoplankton (alga and cyanobacteria) based detection system implemented in a micro-fluidic platform was developed. As change of the environment of algae induced by toxic compound can affect their metabolism, this makes phytoplankton ideal natural biosensors. Their response can be measured in real time by various detection mechanisms i.e., optical, chemical or electrical. The innovation of the system presented in this study, is to integrate both electrochemical and fluorescence detection in a single chamber. The system is shown in Fig.1.

In general, photosynthesis process of algae is inhibited in presence of toxic compound, in our case, Diuron. Electrochemical detection is based on the measurement of oxygen produced by algae under such conditions. It was carried out using transparent silver nanowires electrode. The size distribution of the Ag nanowires is  ~ 80 nm in length and the transparency of the electrode is 80%. Fluorescence detection is based on the activity of photosystem II in the presence and absence of Diuron. The concentration of Diuron can be detected by electrochemical detection between 50 and 1000 nM. (Fig. 2A) and 0.50 to 1000 nM using fluoresecense detection (Fig. 2B). The two detection systems were integrated into a single chamber in a way which enables for more reliable and sensitive detection of water pollutant.

Figure 1  Edge view of the opto-electrochemical sensing device: a transparent oxygen sensor is integrated with a fluorescence sensor into the same chamber.

Figure 2 response curves of electrochemical and fluorescense detections of algae to the herbicide, Diuron 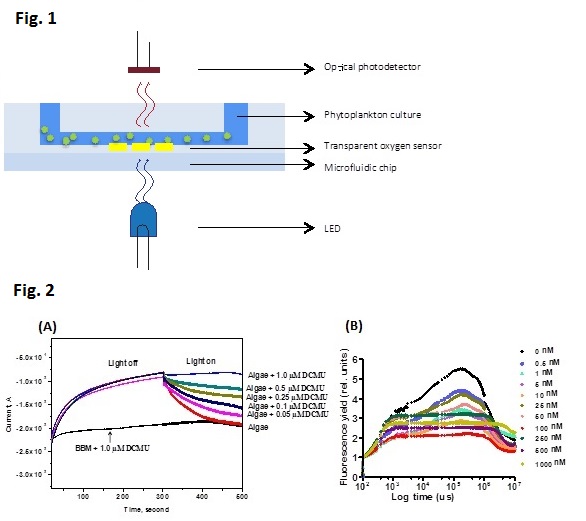