Boulevard Room A (Hilton Chicago)
L. Zhu, L. Zhang, S. Kapoor, and A. V. Virkar (The University of Utah)
Platinum (Pt) is a widely used catalyst for numerous chemical and electrochemical processes. Nanosize Pt particles supported on high surface area carbon are used as both cathode and anode in proton exchange membrane fuel cells (PEMFC) [1]. It is well known that even with 25 ppm CO in the H2 fuels can degrade the performance of a typical PEMFC [2]. Many studies have been reported on the mechanism of CO poisoning on Pt surface using techniques such as LEED, ELS, IRRAS, FYNES, etc. [3,4]. Most of these experiments were done under UHV (~10-10  torr) and low temperatures (~150K) using Pt single crystals.

We report here studies on CO adsorption/desorption using electrical resistance measurements. The experiments were conducted in a test chamber consisted of a silica glass cylinder clamped between two metallic plates with O-rings to ensure gas-tight seals. An electrical heater and a sample holder were inserted into the chamber. A thermocouple was introduced into the chamber to measure the sample temperature. Electrical feed-throughs were inserted from the end plates into the chamber. Also connected to the end plates were gas inlet/outlet fittings. A gas supply system consisting of flow meters and valves was used to introduce various atmospheres into the chamber. Resistance measurements were conducted using digital multimeters. Data acquisition was done using LabView software.

Figure 1 shows the measured resistance response from the Pt film upon switching gases between 10% H2 in Ar and 100 ppm CO in Ar at ~60oC. The temperature versus time profile is also included in the figure. Clear evidence of increasing film resistance during CO adsorption and decreasing film resistance during CO desorption was observed. Similar experiments were conducted at various temperatures and CO partial pressures.

By correlating the resistance change with CO surface coverage of Pt atoms and the Langmuir model, we observed that for the desorption process, a plot of ln(1-R0/R) or ln(ΔR/R) vs. t  is linear, where R and R0 are respectively the resistance for the film at a given time and the initial stage (equilibrated under 10% H2 in Ar). The absolute value of the slope gives the value of desorption rate constant, kd . The adsorption stage was studied by plotting dR/(Rdt) vs. R. The intercept of such a plot gives kapco+kd, where ka is the adsorption rate constant and pco is the CO partial pressure under testing. Since kd  has been obtained by the desorption process, ka can be determined with known  pco  . Figure 2 shows examples of linear plots from both adsorption and desorption stages. It is seen that the desorption stage can be described by a single rate constant, kd . The plot dR/(Rdt) vs. R , however, is not linear. The adsorption stage cannot be thus described a single rate constant, kapco. The dR/(Rdt)  vs. R plots, however, could be described by a two stage process. The initial stage can be described by a relatively high value of , and probably corresponds to adsorption on high energy sites (possibly surface steps). The later stage can be described by a relatively low value of , which possibly corresponds to adsorption on flat surfaces. The AFM images (not shown here) show the film surface was quite rough indicating the presence of surface steps and kinks. The present studies show that kinetics and mechanism of gas adsorption on very thin metal films can be studied by measuring electrical resistance. Supported by the National Science Foundation under Grant Number CBET 0931080 and the US Department of Energy under Grant Number DE-FG02-06ER46086.

Figure 1: Plots of temperature and film resistance (1nm thickness) vs. time for a typical: (a) CO adsorption step and (b) CO desorption step. 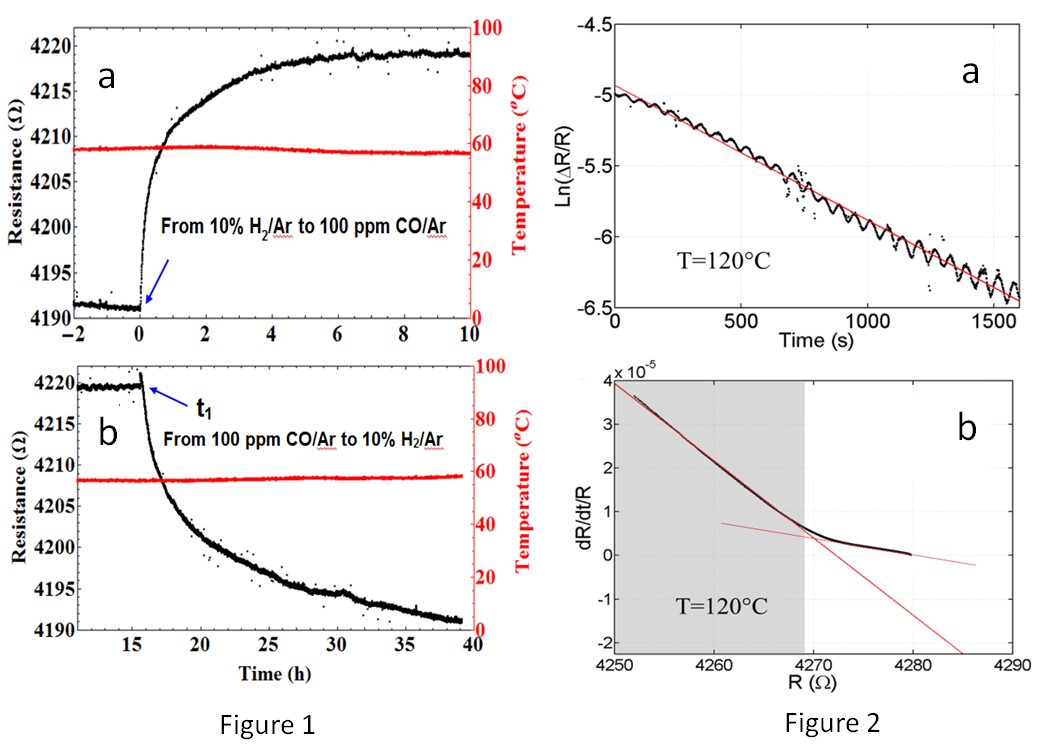