Two-dimensional (2D) layered materials are at the emerging frontiers of research and development. It is expected that quasi-2D layered materials will also find applications for energy storages. It has been known that nanostructured electrodes hold the promise for development of high-performance rechargeable batteries with ultrafast charging and discharging rates that are in great needs for portable electronic devices and electrical vehicles applications. A 3D nanostructured electrodes potentially can address the interwoven issues related with energy density, power density, and cycling stability of electrochemical energy storages, especially lithium ion batteries. In this regard, the 2D nanosheets might prove being superior over nanoparticals and nanowires. Quasi-2D TiO2(B) nanosheet has the desirable intrinsic properties as well as the merits of 2D materials as anode material to design 3D nanostructured electrodes for high-performance Li-ion battery.

In our study, perpendicularly oriented graphene network was first grown by plasma-enhanced chemical vapor deposition that encircles the struts of a nickel foam as template,1 on which quasi-2D TiO2(B) nanosheets, perpendicular to the underlying graphene sheets, were then self-assembled through hydrothermal synthesis. The micro-scale morphology of these quasi-2D TiO2(B) nanosheets grown on perpendicularly oriented graphene network is presented by the scanning electron microscopy images in the inset of figure 1(b).  Such a rationally-designed hierarchical 3D nanostructured electrode based on quasi-2D materials combines the merits such as a short diffusion length and a large surface area that facilitates the ion intercalation, an ordered porous geometry that assists ion migration and offers space for electrode material expansion, and an interconnected network with enhanced structural stability and minimized electron transport resistance.

Using such a 3D ordered macrostructure as an electrode that is based on oriented 2D nanosheets of TiO2(B) and graphene grown inside a nickel foam, coin cells were assembled using lithium metal as a second electrode. Extensive electrochemical studies were conducted to test the potential of such an quasi-2D nanosheets based nanostructured electrode for Li-ion batteries. An extraordinary performance was found in terms of capacity, charge/discharge rates and cycling stability. Such an electrode exhibits a large capacity of 320 mAh/g at 0.3C, 250 mAh/g at 2C, and 100mAh/g at the extremely fast 103C. After 2000 charge/discharge cycling at a current density of 2A/g (12C), it maintains 89% of its initial capacity, and when returning to a lower current density of 0.5 A/g (2C) after the 2000-cycles cycling stress at 2A/g, a negligible capacity lose was found. Figure 1(a) shows the discharge capacities at several different rates, and figure 1(b) exhibits the cycling stability when stressed at 12C charge/discharge rate. These results indicate that such a hierarchical nanostructure based on interconnected quasi-2D TiO2(B) nanosheets could be developed as a very stable and high-rate anode for high-performance Li-ion batteries.

The detail synthesis, material structure and properties, and electrochemical studies will be reported. 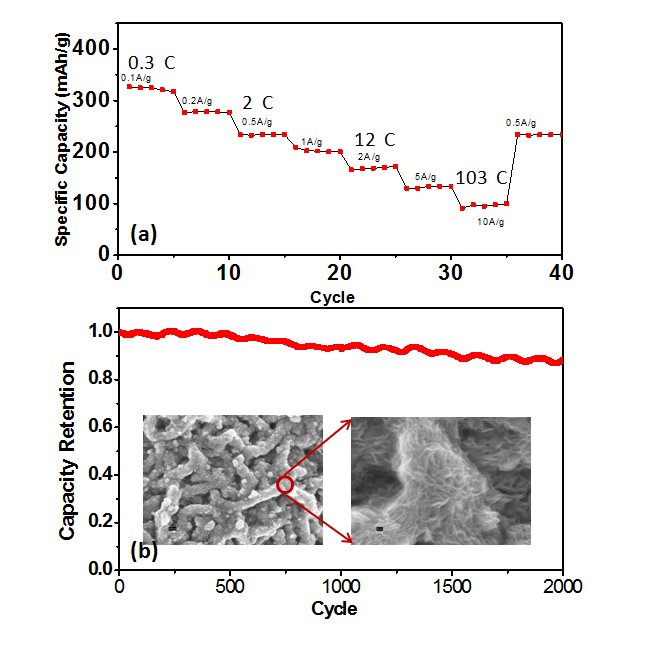