Continental Room A (Hilton Chicago)
J. T. Gostick (McGill University), P. A. García-Salaberri (Universidad Carlos III de Madrid), G. Hwang (Wichita State University), M. Vera (Universidad Carlos III de Madrid), and A. Z. Weber (Lawrence Berkeley National Laboratory)
Understanding the impact of liquid water on reactant transport in Gas Diffusion Layers (GDLs) is of paramount importance to achieving an increased performance in Proton Exchange Membrane Fuel Cells (PEMFCs). In the present work, X-ray Computed Tomography (XCT) was combined with the Lattice Boltzmann Method (LBM) to determine the gas-phase effective diffusivity of partially-saturated carbon-fiber GDLs. Ex-situ invasion experiments were conducted on a PTFE–treated Toray® TGP-H 120 GDL (10% b.w.) at Lawrence Berkeley National Lab’s (LBNL) Advanced Light Source (ALS) synchrotron (Beamline 8.3.2). Water was injected into the sample at different applied capillary pressures varying the static head of water at the bottom face, while tomographic images were acquired at a resolution of 1.33 μm/voxel. A hydrophobic membrane located at the top of the sample prevented liquid water from leaving the system. The reconstructed image stacks were then segmented into fiber, air and liquid phases, and used as computational meshes for the LB simulations. A single relaxation time D3Q7 model was implemented in the open-source LB code Palabos, using the supercomputers Gullimin and Colosse, managed by Calcul Québec and Compute Canada, to run the calculations. The diffusivities in both the in- and through-plane directions were examined due to the anisotropic nature of carbon-paper materials (see Figure 1).

It was found that the effective diffusivity in thin GDLs is strongly dependent upon the actual saturation distribution across the material. Unlike the notable number of connected pathways existing in the in-plane direction, the influence of water configuration was higher on through-plane diffusion. A severe bottleneck effect, preventing almost any flux through the medium, was observed for the full-thickness sample due to the high-gradient saturation profiles in the invasion experiments. In contrast, a pronounced increase of the global effective diffusivity was observed in calculations performed on GDL domains progressively excluding a thicker portion of the flooded region near the inlet. The relative resistance of water in these domains was in the range of that reported in previous works [1,2], even though it didn’t stabilize at a well-defined value. The diffusion flux across the medium continuously increases as the saturation profile in the examined portion of GDL was flatter.

The hypersensitivity of the effective diffusivity on the through-plane water distribution shows the impossibility to describe uniquely the transport properties in thin GDLs just considering the overall saturation level. Moreover, continuum models explicitly solving transport processes inside the GDL should incorporate local constitutive relations obtained under conditions of no saturation gradient. It is contradictory to use global correlations extracted from an inhomogeneous porous medium to characterize the numerical nodes composing the same medium. Local and global effective properties can only be equal if the porous medium is fully homogeneous, but this is not the case of partially-saturated finite-size GDLs.

This modeling inconsistency was explored by performing a massive computational campaign including more than 2000 calculations on dry and wet subsamples with nearly flat saturation profiles. The computed average relative resistances in the in- and through-plane directions were similar to those proposed in Ref. [3]. Further, the ability of the computed correlations for the local effective diffusivity, using harmonic and arithmetic averaging techniques, to recover the results obtained on global heterogeneous domains was confirmed. A similar constitutive relationship for the local effective diffusivity was also determined by combining the aforementioned upscaling/downscaling techniques and the global pore network results by Gostick [4]. Nevertheless, a detailed comparison with the in-situ numerical results presented in [2] showed that a more restrictive dependence of the local effective diffusivity on local saturation may be expected for the region under the rib due to the more tortuous transport paths resulting from condensation of water and interface effects with the rib in addition to capillary transport. 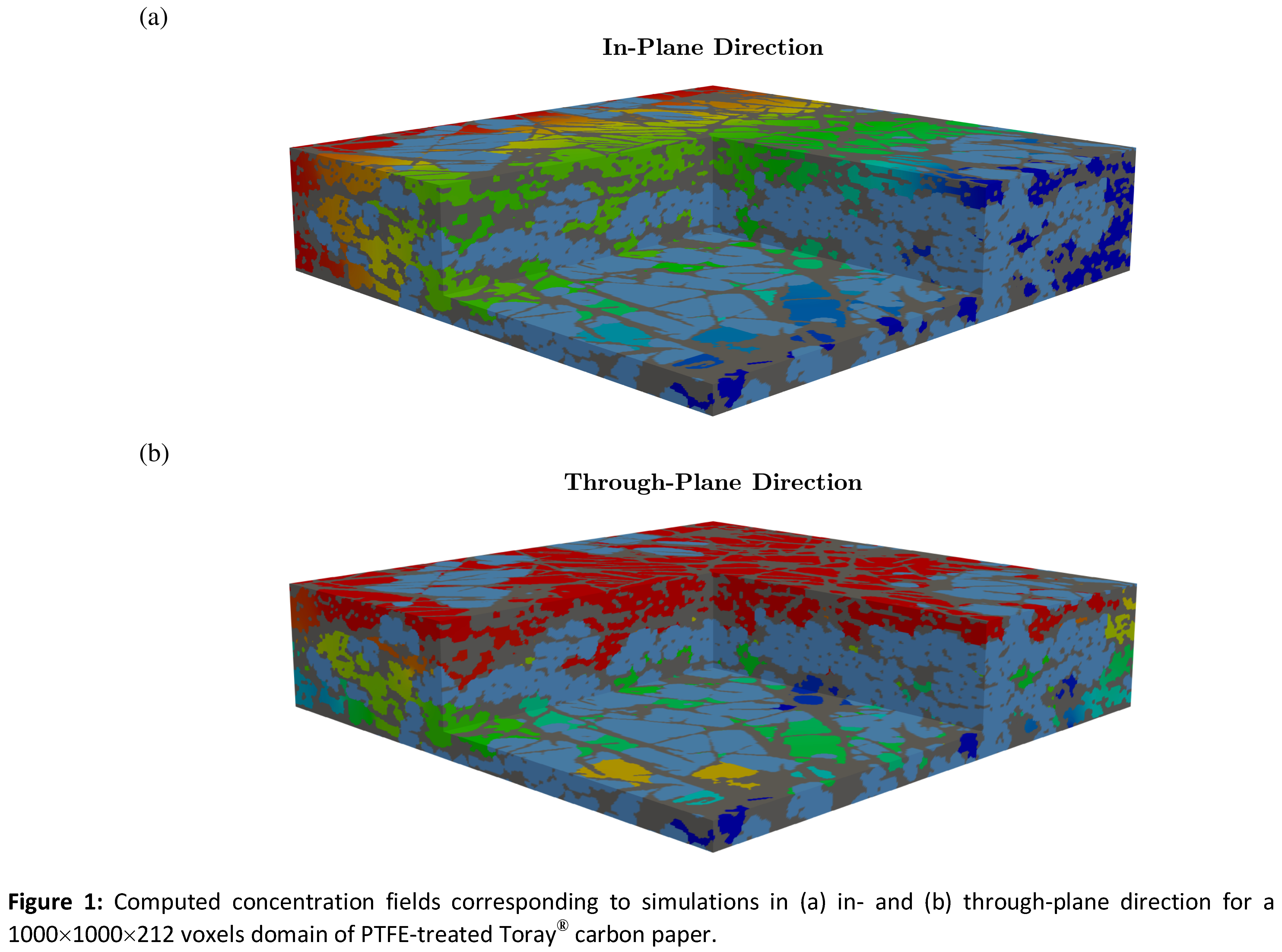