Williford Room A (Hilton Chicago)
M. Piana (Technical University of Munich), T. Mittermeier, P. Madkikar, X. Wang (Technische Universität München), and H. A. Gasteiger (Technical University of Munich)
The major factor that hinders the large scale commercialization of polymer electrolyte fuel cells (PEMFCs) and direct methanol fuel cells (DMFCs) is the need of a substantial amount of platinum‑group metals (PGM) as catalyst for the oxygen reduction reaction (ORR). For applications with a potential large scale like in electromobility, the Department of Energy (DoE), in its Fuel Cell Technical Team Roadmap, set the 2020 target [1] for PGM total loading as 0.125 mgPGM/cm²MEA.

Unfortunately, the decrease of PGM loading using PGM alloys or their full replacement with non‑PGM catalysts is still on the research stage. The reasons for this are the strong requirements of a suitable material, i. e., a high stability in acidic media and an electrocatalytic activity as close to Pt as possible. Regarding the last point, the DoE set the 2020 target for non‑PGM activity as 300 A/cm³cat at 800 mViR‑free.

Non‑PGM catalysts based on Fe/N/C [2] or Co/N/C [3] report very high activities but very poor stability in acidic media. On the contrary, valve metal oxides as non‑PGM ORR catalysts are promising for their stability in acid but show activity still to improve [4, 5].

In order to improve the activity of these oxides, a better understanding on its origin, in terms of nature of the active sites, is needed. The research group that mostly developed these catalysts reported that structural defects are working as active ORR sites [6, 7].

In this contribution, a series of ORR catalysts consisting of zirconium‑oxide nanoparticles supported on Ketjen-Black carbon (ZrO2/KB) is studied. The synthesis route makes use of two different organometallic precursors, Zr oxyphthalocyanine (ZrOPc) and Zr acetylacetonate (Zr(acac)4), obtaining in both cases similar particles of sizes below 10 nm. These are morphologically analyzed using SEM and TEM, and structurally characterized with XRD. Electrochemical measurements of the ORR activity are performed at 20 °C in a rotating disk electrode (RDE) set-up in 0.1 M HClO4.

As is shown in the below figure, the carbon‑supported nanoparticles prepared from ZrOPc show an increasing ORR activity (measured by RDE in 0.1 M HClO4, 20°C 1600 rpm, anodic scans, capacitively corrected) with the heat treatment temperature, correlated with the increase in crystallite size or with the better formation of tetragonal ZrO2. On the other hand, the materials obtained from Zr(acac)4 present no activity in any case, despite a similar crystallite size and tetragonal structure formation. This gives an indirect evidence of the importance of both ZrO2 and N for the ORR activity of the catalyst. A negligible activity of a heat‑treated carbon‑supported H2Pc reinforce the conclusion that the N sites are not enough to provide ORR activity, in our synthesis conditions.

The research leading to these results received funding from the Fuel Cells and Hydrogen Joint Undertaking under Grant Agreement Duramet n°278054 as part of the Seventh Framework Programme of the European Community for research, technological development and demonstration activities (FP7/2007-2013). 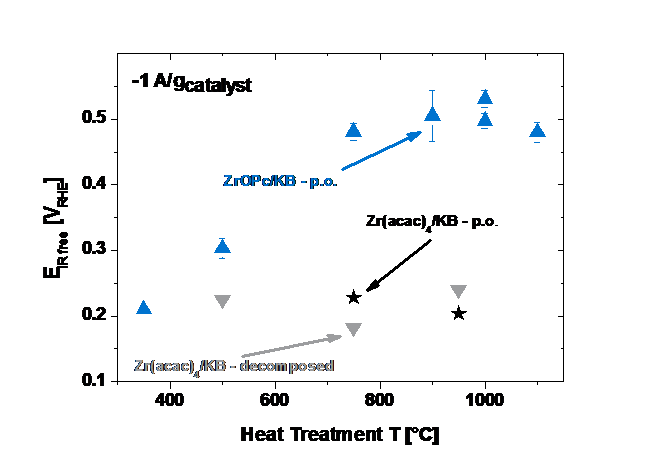