Continental Room A (Hilton Chicago)
M. N. Safa, A. Chamaani, and B. El-Zahab (Florida International University)
To render a battery fully solid-state, all the battery components, including the electrolyte have to be solid-state. Solid polymer electrolytes (SPE) emerged as a plausible replacements of liquid electrolytes over the past few years [1]. For these electrolytes however, low operation temperatures reduces the ionic conductivities leading to many obstacles for SPE’s utility in batteries, especially lithium ion batteries [2]. Inorganic filler materials have been shown to improve the ionic conductivity of liquid electrolytes and the mechanical properties of the solid electrolyte [2,3]. Polymeric ionic liquid (PIL) electrolytes have emerged as electrolytes that benefit from both the liquids’ high ionic conductivities and the solids’ high mechanical properties. These electrolytes have been most commonly prepared using ionic liquids blended with a polymer and a lithium salt [4]. In this study, the effect of the addition of various inorganic fillers was investigated. The investigated PIL included the polymer poly(diallyldimethylammonium) and imidazolium-based ionic liquids with various lithium salt concentrations.

The synthesized PIL without the filler were shown to be free-standing and mechanically stable. The addition of inorganic filler materials such as SiO2, TiO2, or Al2O3 afforded high ionic liquid loading percentages. Figure 1 shows a photograph of the prepared films of ½ inch in diameter and 50-150 microns in thickness. The films were free-standing and provided adequate ionic conductivity performance as shown in subsequent studies. Figure 1b shows the effect of 5 wt% loading of SiO2 fillers. Various electrochemical studies were conducted to the synthesized PIL to characterize the electrochemical properties and their potential use in lithium ion batteries. Ionic conductivity measurement of the PIL at various temperatures was evaluated using electrochemical impedance spectroscopy.  Two-fold improvement was observed by the addition of inorganic fillers consistently at various temperatures ranging from -10oC to 50oC. At room temperature the conductivity was measured as 1.09 mS/cm compared to 2.07 mS/cm with the addition of SiO2 fillers. The temperature and ionic conductivity relationship was fit to an Arrhenius type plot and comparison of ionic conductivity, showing an improved performance due to an improved ion-conduction pathway provided by the addition of the SiO2.

Electrochemical stability window (ESW) of the synthesized PILs were measured by performing linear sweep voltammetery (LSV) at room temperature in a Li/PIL/SS cell where lithium worked as both reference and counter electrode and stainless steel as working electrode. No change in stability window value was observed after addition of filler materials. In both cases the stability window was at least 5.2 V. 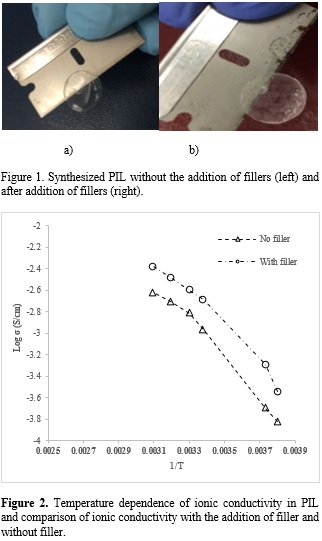