Rapid consumption of oxygen and generation of various reactive oxygen species (ROS), collectively referred to as respiratory burst, occur in immune cells while they are in the processes of bacterial killing and phagocytosis as biological defense mechanisms. It is of significant importance in clinical fields to know the ROS generation mechanism and quantity therein. We have been studying electrochemical means to measure the respiratory burst in THP-1, a cell line from myeloid leukemia patients1) 2).

THP-1 cell suspension (3.0 × 105 cells/well) was introduced into a well of this sensor, and phosphate buffered saline (PBS; Sigma chemicals, USA) and 11.4 mM glucose solution were used as measurement solutions. Ag/AgCl electrode was used as a control electrode and -0.5 V vs. Ag/AgCl and 0.0 V vs. Ag/AgCl were applied to working electrodes 1 and 2, respectively; the sample was measured for 90 minutes with 1-second sampling time. Twenty minutes after starting the measurement, PMA was added in drops to reach a final concentration of 20 nM or 200 nM, and each reduction current was monitored. 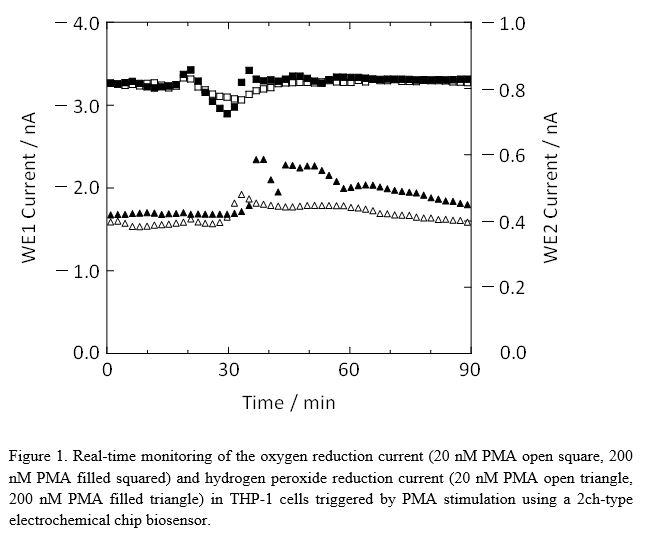