PDR 6 (Hilton Chicago)
M. Ayache, D. Jang, and R. Kostecki (Lawrence Berkeley National Laboratory)
The solid electrolyte interphase (SEI) layer [1] is essential to Li-ion battery functionality as it ideally forms an ionically conductive passivation layer, which protects the electrolyte from further reduction at the electrode surface.  Although the SEI has been studied extensively in a number of electrode/electrolyte systems, its chemical composition, structure, and operation mechanism still remain a subject of considerable debate.   Among the principal obstacles to detailed SEI characterization is the fact that the signal spatial resolution of traditional optical techniques such as Fourier transform infrared (FTIR) and Raman spectroscopy/microscopy is limited by the diffraction limit c.a. 500 nm. The standard optical response signal from the SEI layer convolves spectral features from many different compounds, which makes characterization of the inherently nanoscale chemical building blocks of the SEI layer nearly impossible.

Infrared apertureless near-field scanning optical microscopy (IR aNSOM) [2] can easily overcome the diffraction limit.  In aNSOM, light is focused onto a metal-coated atomic force microscope (AFM) tip, which causes a strongly enhanced field at the tip apex.  Since the tip is held in close proximity to the sample surface, the microscope is capable of imaging at a resolution only limited by the tip’s radius of curvature (~20 nm).  The scattering from the tip is modulated by the dielectric function of the sample surface, allowing for a direct surface-selective measurement of local absorption at the nanoscale.  This capability is valuable in characterization of Li-ion electrode materials [3].

In this work we apply IR aNSOM to image the surface film on highly oriented pyrolitic graphite (HOPG).   Linear sweep voltammetry (LSV) was conducted on ZYH-grade HOPG electrode in 1 M LiPF6 in EC:DEC 1:2 (w:w) electrolyte from open-circuit potential (OCP ~ 2.9 V vs. Li/Li+) to several potentials that correspond to the SEI layer formation.  The HOPG electrodes were removed from the cells and imaged ex situ under a dry nitrogen atmosphere with the IR aNSOM at a variety of wavelengths within the IR laser tuning range 927-1094 cm-1. IR aNSOM images of the HOPG electrode are shown in Figure 1.  The image intensity Asinϕis proportional to the IR absorption at the tip location.  The variation in IR contrast with wavenumber demonstrates the nanoscale chemical inhomogeneity of the layer.  Variation in wavenumber produces near-complete contrast reversal, highlighting the locations of different compounds with non-overlapping absorption bands within the laser tuning range.  These results show the capability of near-field microscopy to explore the composition and structure of interfaces in electrochemical systems.   Correlating near-field absorption data with spectra of reference compounds will enable full identification of the SEI’s chemical constituents at the nanoscale.

This work was supported by the Assistant Secretary for Energy Efficiency and Renewable Energy, Office of Vehicle Technologies of the U.S. Department of Energy under Contract No. DE-AC02-05CH11231 under the Batteries for Advanced Transportation Technologies (BATT) Program. 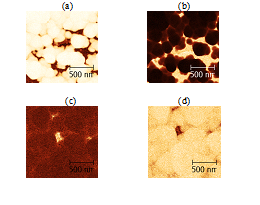