Detailed mechanistic understanding of Li−S redox reactions is critical for realizing efficient and long-lasting rechargeable Li−S batteries.1-4 Recently, we exploited rotating ring-disk electrode (RRDE) technique and specially-designed Li-S catholyte cell to examine sulfur charge/discharge behavior in 1,3-dioxolane:1,2-dimethoxyethane (DOL:DME) and dimethyl sulfoxide (DMSO).5 We show that only part of the sulfur reduction capacity is obtained through direct electrochemical steps, and that the rest of the capacity is achieved via various subsequent chain-growth and disproportionation reactions that generate reducible species. The rates of these chain-growth/disproportionation reactions are higher in low-dielectric solvents such as DOL:DME (εDOL = 7.13; εDME = 7.075)6 compared to high-dielectric solvents such as DMSO (εDMSO = 46.5)6 due to its poor stabilization of polysulfides, which leads to a higher rate capability in the Li-S batteries. In this study, we investigate the influence of various solvent properties including dielectric constant and donor number on the Li-S redox and disproportionation behaviors.

To investigate the influence of dielectric constant on the Li-S behaviors, we first replaced DOL with 1,4-Dioxane (Diox), which has a lower dielectric constant (εDiox = 2.21)6 than DOL. Decreasing solvent’s dielectric constant from DOL to Diox is expected to further de-stabilize polysulfides. Figure 1a-c show the cyclic voltammograms (CVs) and RRDE results of a glassy carbon (GC) electrode in 4 mM S8 in 1.0 M LiTFSI  Diox:DME(1:1) and DOL:DME(1:1). First, the onset potential of S-reduction in DOL:DME is ~150 mV higher than that in Diox:DME. This observation is in line with our hypothesis that the S-reduction kinetics decreases with decreasing solvent dielectric constant (i.e. decreasing polysulfide stability),5 which is consistent with the fact that S-reduction activity in DMSO is ~100 mV higher than that in DOL:DME.5 Second, the second reduction wave diminishes in Diox:DME, which indicates that there is only one direct electrochemical step in Diox:DME. The numbers of electron transferred in Diox:DME is determined to be 2.2 e–/S8 via Levich Koutecky relationship, which is significantly lower than that measured in DOL:DME (ave. 5 e–/S8).5 The single reduction wave observed in Diox:DME with 2.2 e–/S8 could be attributed to:

Interestingly, further electrochemical reduction from S82– to S84– (or 2S42–) is significantly discouraged upon replacing DOL with Diox. We believe that the drastic decrease in solvent’s dielectric constant from DOL to Diox prohibits further electrochemical and/or disproportionation reactions of S82– to other polysulfide species such as S42– and/or S62– and/or S3–∙  due to the extremely poor stabilization ability of Diox. Therefore, it is critical to identify optimum solvent dielectric constant and potential secondary descriptor to optimize the S-reduction kinetics and the polysulfide disproportionation rates. Further investigation using RRDE, UV-VIS spectroscopy, Li-S catholyte cells and its implication in rechargeable Li-S batteries will be presented.

The authors are grateful to Dr. Juan Herranz-Salaner for RRDE cell design and scientific discussion, Dr. Himendra Jha for experimental assistance and scientific discussion, and Johannes Hattendorff for the measurement of solvent viscosity. Financial support of this research by the Bavarian Ministry of Economic Affairs and Media, Energy and Technology performed under the auspices of the EEBatt project. Y.C. Lu is grateful to the funding support from project RNEp1-13 of the Shun Hing Institute of Advanced Engineering, The Chinese University of Hong Kong. 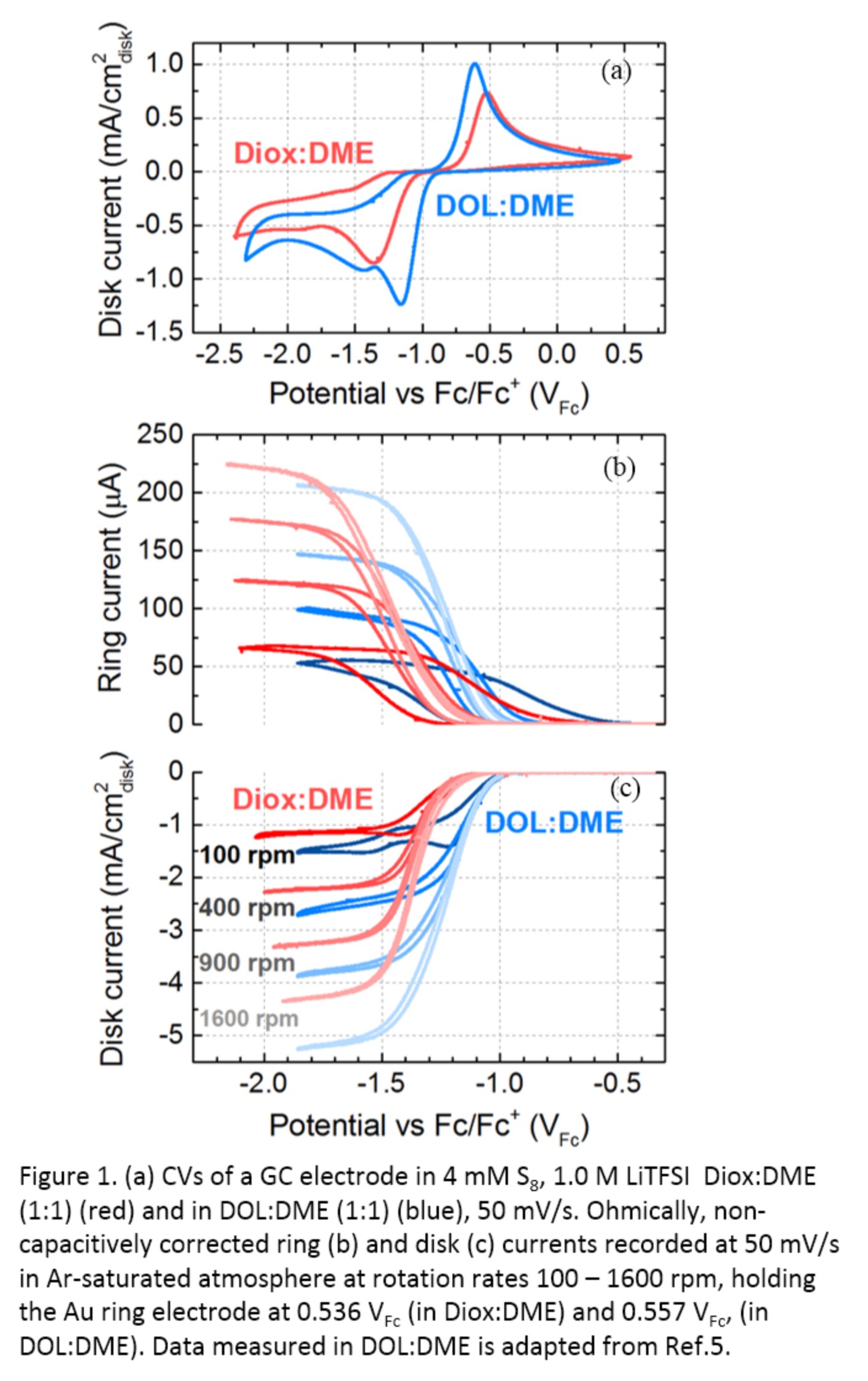