Continental Room A (Hilton Chicago)
P. Andrei (Florida State University), G. Mixon (Florida State Univesity), M. Mehta (Florida State University, Aeropropulsion, Mechatronics and Energy Center), and V. Bevara (Aero propulsion, Mechatronics and Energy)
The design of the anode and cathode catalyst layers is one of the most important processes in the overall design of low-temperature proton exchange membrane fuel cells (PEMFCs) because of two major reasons: (1) the discharge voltage and the power density of PEMFC strongly depend on the porosity and catalyst distribution in the catalyst layers and (2) the final price of the PEMFC depends significantly on the total mass of the platinum in these layers. Hence, it is particularly important to carefully design the microstructure and platinum distribution in the catalyst layers in order to both increase the power density and reduce the price of the cells.

There are many efforts in the literature to optimize the catalyst layers in PEMFCs; a review of the existing can be found in [1]. Most of this work focuses on solving the discretized transport equations on 1-D or 2-D finite element grids and designing the platinum loading, catalyst layer thickness, platinum-to-carbon ratio, or agglomerate composition that result in the largest discharge voltage at a given discharge current. In all the existing works in the literature, the total number of design variables ranges between 3-5 variables that are designed using either gradient-based techniques, evolutionary, or genetic algorithms.

In this work, for the first time, we present a large scale optimization method in which we design the optimum platinum distribution in the catalyst layers at each mesh point on the finite element grid. Hence, the total number of design variables is equal to the number of degrees of freedom of the grid, which is of the order of 104 in 2-D meshes and 106 in 3-D meshes. In this way, we are able to predict the precise distribution of the platinum content at each location inside the cell. Our technique is based on evaluating the sensitivity functions of the platinum deposition in the catalyst layer and uses a new gradient-based approach to compute the optimum distribution of the platinum in the catalyst layer. The sensitivity functions are computed in the adjoint space of discretized transport variables by using a new algorithm that requires solving only one sparse system of linear equations instead of a large number of systems to find the Gâtaux derivatives of the discharge current of the cell with respect to the design variables.

The technique is relatively general and can also be applied to the optimization of the void fractions (i.e. porosity) and platinum-to-carbon ratios at each mesh point. The technique can be applied to any transport system of equations including traditional diffusion-migration models coupled with Butler-Volmer kinetics at the anode and cathode, as well as to models based on Monte-Carlo techniques or models that require solving the nonlinear Poisson equation. In our presentation we use a simplified but well calibrated model developed by Cetinbas et al [3]. The figure below shows the simulation region, the transport equations and the fluxes of species throughout the cell in the case of a 2-D geometry. Our numerical results show that one can increase the power density of the current state-of-the-art design presented in [2] by at least 15 % by using the same amount of platinum and redistributing it non-uniformly throughout the catalyst layers. More details about the technique, the numerical implementation, and the final optimized structures will be presented at the conference.

Figure 1. Simplified schematics of a PEMFC showing the simulation region, the transport equations, and the corresponding fluxes of the chemical species. 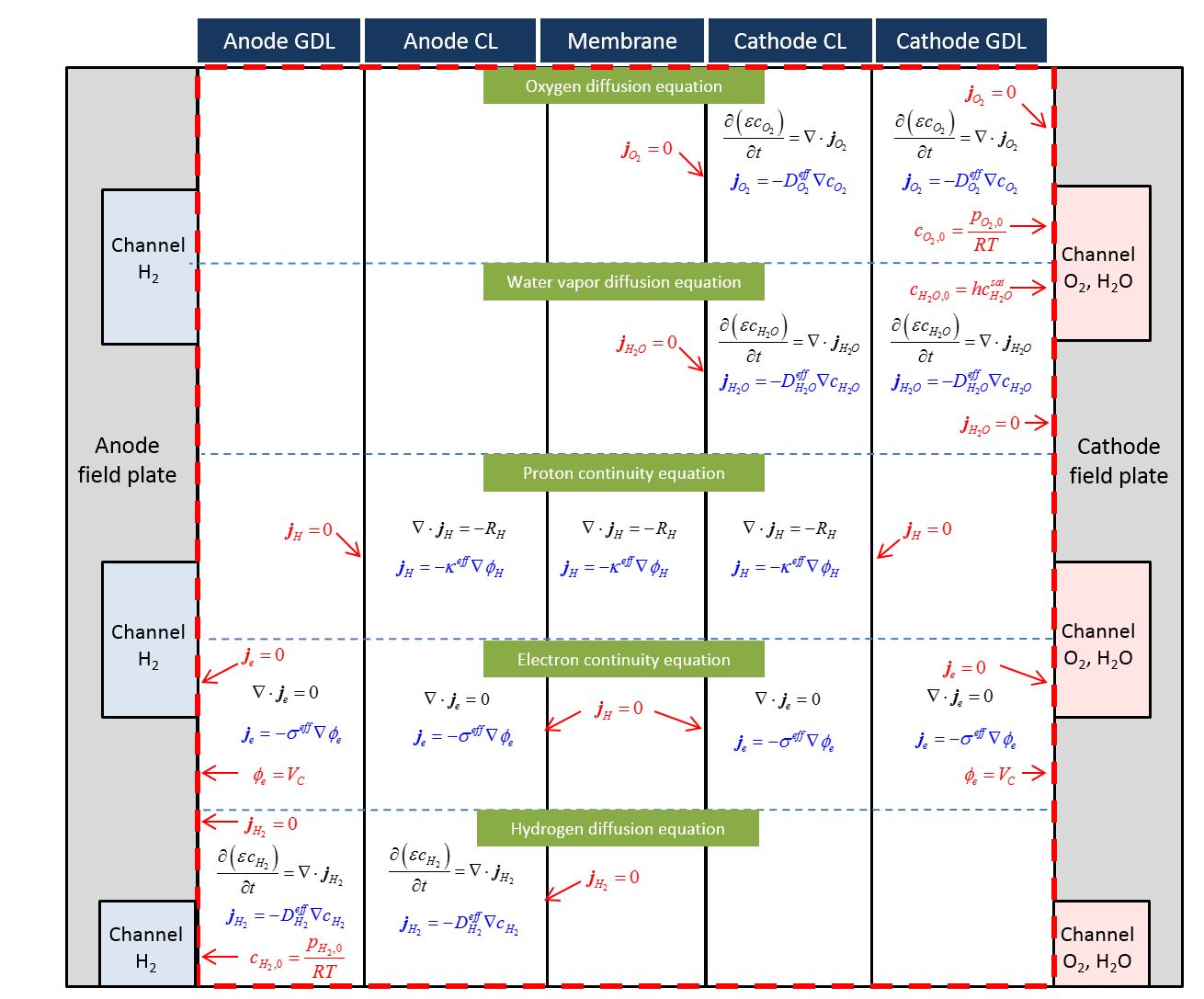