Salon A-3 (Hilton Chicago)
T. S. Chadha (Washington University in St. Louis), P. Shetty, A. M. Tripathi, S. Mitra (Indian Institute of Technology, Bombay), and P. Biswas (Washington University in St. Louis)
Tin oxide anodes for lithium ion batteries have recently been of considerable interest due to their high specific capacity (782 mAh/g) compared to conventional graphite electrodes (372 mAh/g). However, one of the major drawbacks with this material is the high volume expansion (≈300%) associated with the alloying and de-alloying process which results in severe mechanical damage to the material leading to rapid performance degradation. Several approaches have been adopted to reduce the mechanical damage by nanostructuring the electrode1 or by making nanocomposites of tin oxide-graphene2both of which provide better strain relaxation. However, achieving stable performance coupled with a lack of scalable manufacturing processes has so far prevented the commercial use of tin oxide as an anode material in lithium ion batteries.

In this study, we present direct gas phase synthesis of one-dimensional, single crystal tin oxide nanostructures (nanocolumns) directly on a stainless steel current collector using the aerosol chemical vapor deposition (ACVD) process. This binder free approach provides several advantages3 including control of the final nanostructure morphology on the current collector; the direct attachment of each column to the current collector providing enhanced electrical contact;4 and scalable manufacturing capabilities. To further enhance the cycling performance, a reduced graphene oxide sheet (RGO) was deposited onto the nanocolumns which results in increased electrical conductivity and enhanced strain relaxation.   The electrochemical performance of these nanostructures was tested in a half-cell assembly against Li/Li+.

Control over the morphology of the nanostructured tin oxide was demonstrated by changing the process conditions in the ACVD reactor. For electrochemical characterization, the desired morphology of the tin oxide nanostructures was the one-dimensional columnar morphology, with a column height ranging from 0.5 – 4.0 μm depending on the deposition time and a column width of 150 – 250 nm, confirmed by scanning electron microscopy analysis (Figure 1a). High resolution transmission electron microscopy and x-ray diffraction analysis confirmed the single crystal nature of the tin oxide nanocolumns preferentially oriented along the (110) plane (Figure 1b-c). Electrochemical cycling of the bare tin oxide nanocolumns (Figure 1d) yielded an initial cycle discharge capacity of 780 mAh/g. However, the capacity degradation in the bare nanocolumns was rapid with only 53% capacity retention after 30 cycles at a cycling current density of 100mA/g. Ex-situTEM analysis shows severe mechanical damage after 30 cycles (Figure 1d inset). The electrochemical cycling of the RGO coated nanocolumns was performed to probe the improvement in the anode capacity and the cycling capability. The effects of the coating on the performance of the anode will be discussed. Electrochemical impedance spectroscopy (EIS) was used to investigate the influence of the RGO coating on the electronic properties of the anode.

This work is based upon work supported under the US-India Partnership to Advance Clean Energy-Research (PACE-R) for the Solar Energy Research Institute for India and the United States (SERIIUS), funded jointly by the U.S. Department of Energy (Office of Science, Office of Basic Energy Sciences, and Energy Efficiency and Renewable Energy, Solar Energy Technology Program, under Subcontract DE-AC36-08GO28308 to the National Renewable Energy Laboratory, Golden, Colorado) and the Government of India, through the Department of Science and Technology under Subcontract IUSSTF/JCERDC-SERIIUS/2012 dated 22nd Nov. 2012. 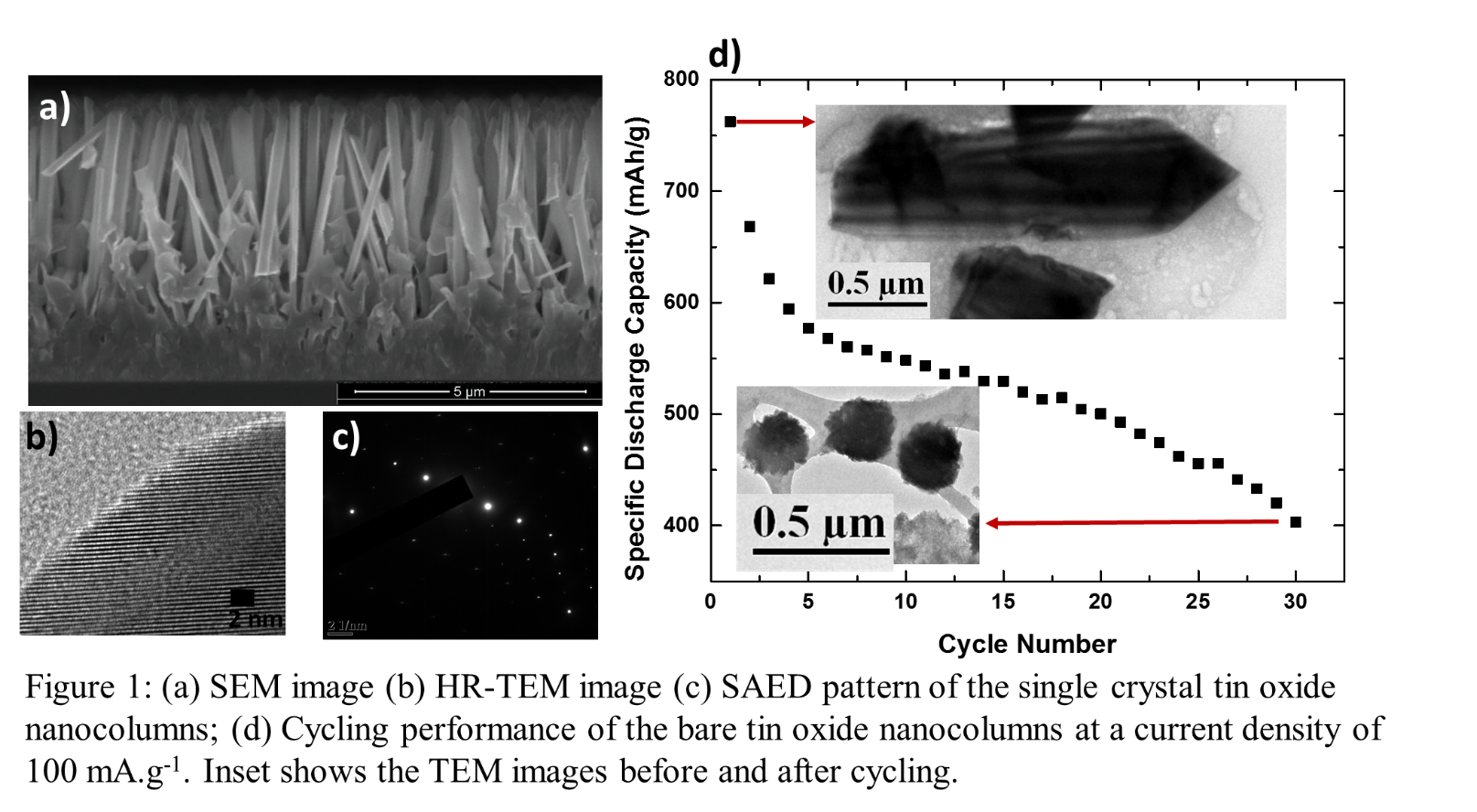