Salon C (Hilton Chicago)
E. N. Moss Jr., R. Nelson, L. Morris Jr., M. H. Weatherspoon, and P. L. Moss (Florida A&M University - Florida State University)
Due to the increasing demand for lower energy costs for the supplier and the consumer, using energy storage devices can offer a number of high-value benefits, provided that lower costs can be gained from using this method.  Using rechargeable lithium batteries as a storage device in tandem with the power grid can be viewed as a viable way to reduce costs of generation and distribution by the power company and also as a way to drive down electricity bills for consumers.  Possible grid applications with energy storage devices can  range from frequency regulation and load following, for which short response times are needed, to peak shave and load shift, both of which can lead to improvements in grid reliability, stability, and cost [1].

Energy storage systems (ESS) are becoming  widely used as a compliment to the power grid (need a citation to prove this). Large scale ESS are often used due to the advancement of the technology but  smaller scale  technologies such as compressed air, thermal (thermal what?) and batteries, are also being used more. The smaller scale application can be used more often because there is not a need for specific geographical requirements such a remote location [2]. The ESS that will be discussed is one composed of lithium-ion batteries. There are many advantages of using this specific device, including a high energy-to-weight ratio, no memory effect, and a little self-discharge[3]. Common applications include portable equipment, mobile telephones, and plug-in hybrid and electric vehicles.

In this study, an overview of a proposed ESS organization and simulation of the response of both parallel and series lithium-ion battery ESS configurations will be compared to determine the most efficient method of powering a load.  Factors that determine the better response include capacity fade and useful life. From these results, it can be concluded which may be a better design to incorporate into an ESS based on cost.

This work was supported by the FREEDM ERC program of the National Science Foundation under award number EEC-08212121. 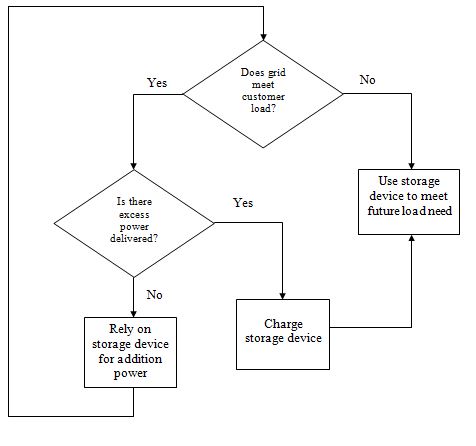