Salon C (Hilton Chicago)
J. Park, M. A. Uddin, S. Ganesan, U. Pasaogullari, L. J. Bonville, and T. Molter (University of Connecticut)
Effects of cationic impurities on performance loss are investigated by incorporation of foreign cation into the MEA in a form of salt solution. The hydrophobic property of the gas diffusion layer (GDL) acts as a barrier for transport of aqueous contaminant solution to reach the catalyst-coated membrane (CCM). In our previous work, the role of the GDL in cationic contamination and mitigation has been studied with isopropanol (IPA) as a wetting agent of the GDL [1]. Here, we present the effect of the added 15% IPA in the cationic solution to the overall fuel cell performance by an ex-situ soak method and an in-situ injection.

As shown in Figure 1(a), MEAs were disassembled from cell and exposed to further soaking test after preconditioning process for 24 hours. Two MEAs with same configurations have been subjected to ex-situ contamination with wetting agent (cell #1) and wetting agent alone itself (cell #2). The continuous voltage drop was observed in the case of cell #1, while there was no additional performance loss during the cell operation in the cell #2. Distributed Ca2+ ion in the membrane cross section after the soaking in the 15% IPA added cationic solution was gradually moved and accumulated in the cathode side due to migration under the potential gradients, resulting in performance degradation. Figure 1(b) shows the performance loss about 80mV by the only 15% IPA solution injection in both cases of the 400mA/cm2current density and at the OCV condition due to parasitic current of IPA oxidation in the cathode leading to a mixed potential.

To analyze the effect of IPA soaking on irrecoverable performance loss during soaking, the ion exchange capacitance (IEC) values are measured for fresh CCMs, IPA soaked CCM and re-protonated CCM. In Figure 2, the IECs of reinforced membranes show remarkably different behavior in compared to non-reinforced Nafion membranes. The IEC results reveal the IPA led to a strong impact on the proton conductivity of the membrane and catalyst layers that provides an irrecoverable performance in the fuel cell. 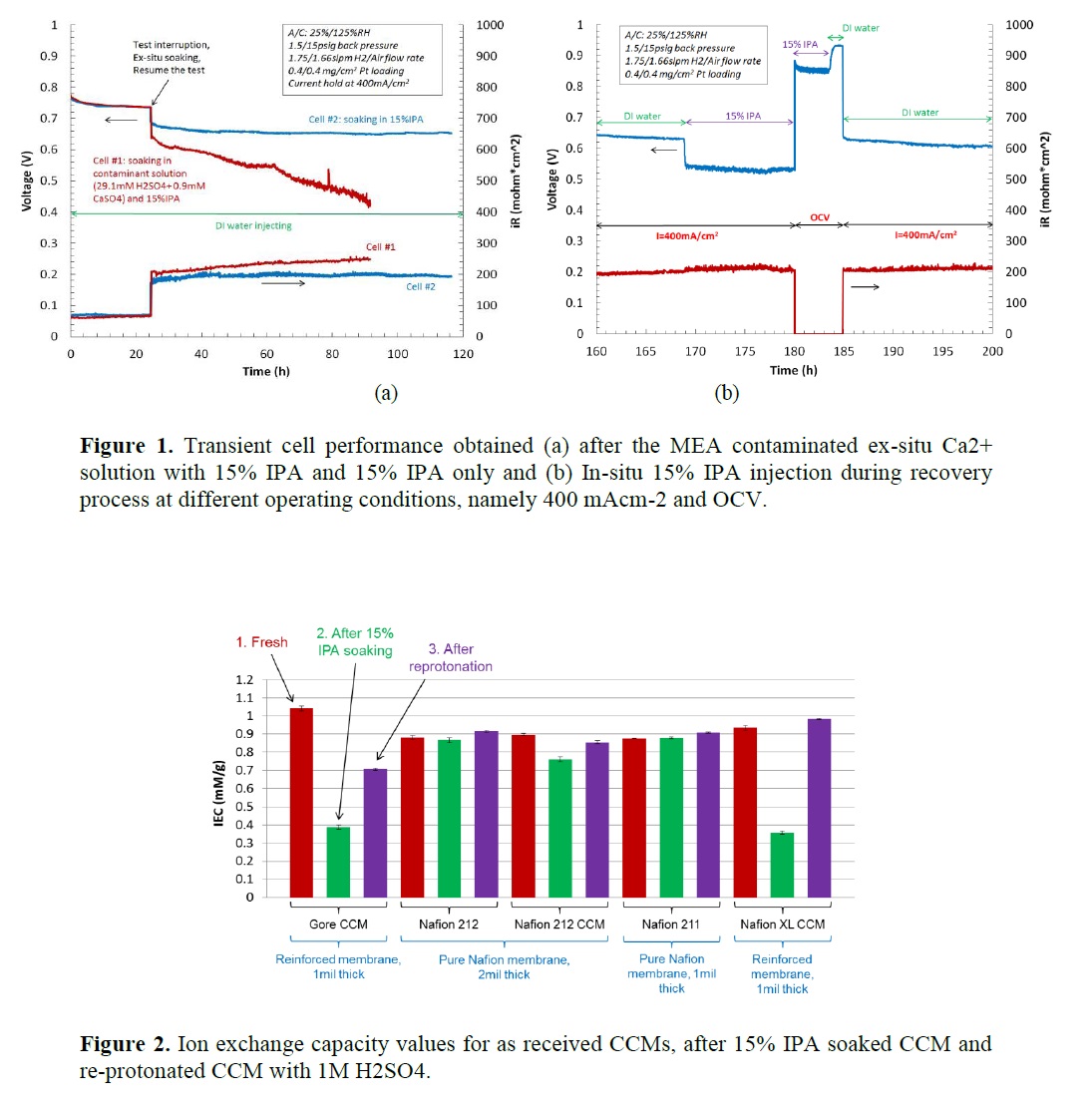