Electrochemical characterization has been carried out to study the performance of different electrodes and to diagnose the factors for performance loss. Polarization curve measurements have been utilized to study batteries with different cell configurations or material selections. 1,2 It has been shown that reaction kinetics of the V2+/V3+ couple is significantly slower than the V4+/V5+couple on the positive side on carbon papers.3 The negative electrode therefore dominates activation loss caused by reaction kinetics. Polarization curve measurements coupled with electrochemical impedance spectroscopy (EIS) measurement have also been used to diagnose the sources of performance loss.4,5 In the negative electrode of VRFB, the potential losses caused by charge transfer, ohmic and finite diffusion can be quantified using EIS measurement and equivalent circuit analysis, as elucidated in detail by Sun et al..4

A comprehensive protocol of electrochemical characterization, including polarization curve measurements coupled with EIS, is being developed to characterize the electrode performance within an experimental VRFB setup with different material options and varying operation conditions. Generally, double layer capacitance can reflect the electrode surface area that electrolyte can access. In Figure 1, the impedance spectrum of a SGL 25AA carbon paper electrode installed in a 5 cm2 flow battery cell is presented. Filled with 1 M H2SO4 electrolyte, the battery cell had Nafion 117 membrane as separator, and equipped Hg/Hg sulfate reference electrode installed as suggested in the literature.4 The equivalent circuit model is presented in the figure. The double layer capacitance of this electrode is 2.60×10-3 F, according to the equivalent circuit model analysis. A discharging polarization curve measurement was carried out to show the V4+/V5+ polarization process at different overpotentials on the same cell setup running in a symmetric cell configuration. The electrolyte contains 0.85M V4+, 0.85M V5+ and 5M total sulfate to maintain 50% constant state of charge during the measurement. The electrolyte feed rate on both sides was 1.68 mL/min. After each polarization step, an impedance spectrum was taken at the same overpotential. The spectra of V5+ reduction at selected overpotentials are shown in Figure 2. A more thorough analysis the battery impedance response will be reported and identify the causes of overpotential loss in V5+reduction on the electrode. This work also will be extended to more electrode materials and varying battery operation conditions to comparatively investigate their influence on battery performance.

This work is being supported by Dr. Imre Gyuk from Office of Electricity Delivery and Energy Reliability, Department of Energy. 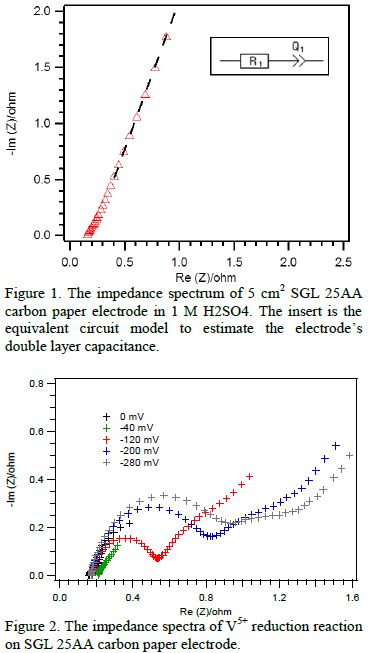