Boulevard Room A (Hilton Chicago)
A. Hayashi, M. Kitamura, Z. Noda, and K. Sasaki (Kyushu University)
Electrocatalysts for PEFC, made of platinum deposited carbon materials, have an import role to govern PEFC performance. Although the initial activity is high enough to be commercialized, their long-term durability should still be improved. Especially, carbon oxidation under stop/start cycles of fuel cell vehicles, where the potential at the cathode becomes as high as 1.5 V vs RHE. In order to check long-term durability of electrocatalysts against carbon oxidation, we need to perform accelerating degradation tests. Potential cycling up to high potential is usually used to accelerate degradation.

In this study, we introduce our method to accelerate degradation of electrocatalysts using Environmental TEM (Hitachi HF-3300). For carbon oxidation, the air is introduced into the specimen chamber, and the specimen holder is heated up to 200 oC to accelerate degradation instead of cycling to high potential many times. In this method, it is possible to observe degradation of electrocatalysts in real-time. In addition, our method makes it possible that both surface and transmitted images are available at the same time through simultaneous SEM and STEM observation.

We have further tried similar experiments with a sample directly picked up from the cathode catalyst layer of PEFC, which includes Nafion ionomer. Similar to the case without Nafion, platinum is embedded after the acceleration test as shown in Figure 1, even though agglomeration is slightly increased. However, the surface image is somewhat different. We believe that this is due to the existence of Nafion ionmer on the carbon surface.

We have also controlled the atmosphere of observation using hydrogen or humidified air. We will discuss possible degradation mechanisms through the comparison to accelerated degradation derived by potential cycling. 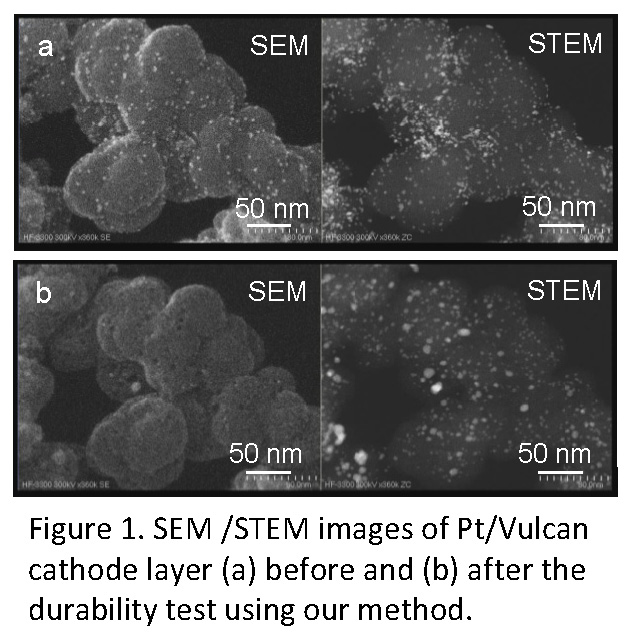