1549
A Cationic Contamination in PEFC Cathode: A Cause and Effect Study

Boulevard Room A (Hilton Chicago)
M. A. Uddin, J. Park, S. Ganesan, U. Pasaogullari, L. J. Bonville, and T. Molter (University of Connecticut)
The cationic impurities that get introduced into the PEFC from the ambient air (e.g. roadside contaminants) and from the corrosion of stack and balance of plant components which are known to have a severe negative effect on the durability and performance during the long-term operation. The performance losses are originated from (a) a reduction in proton conductivity, and (b) a reduction of water retention (1). In addition, in our recent studies, it is found that the cationic contaminant also reduces oxygen concentration in the catalyst layer ionomer (2) and the salt precipitation at the gas diffusion layer and flow field channels that eventually block the reactant transport to the catalytic sites (3).

In this study, the ex-situ soaking method for cationic contamination in 0.9 mM CaSO4, 29.1 mM H2SO4 and 1% (v/v) IPA for 100 h similar to our previous study (4) and in-situ injection of acidified water (1 mM H2SO4 and 1% v/v IPA) for performance recovery have been adopted. The galvanostatic performance data at 400 mAcm-2 for PEFC cathodes contaminated with and without CaSO4 solution are given in Figure 1. Cell #1 shows the performance of MEA that pre-conditioned for 24 h (Step I) and disassembled from the cell and exposed to CaSO4 solution through soaking test in 0.9 mM CaSO4, 29.1 mM H2SO4 for 100 h (Step II). Then, the cell was subjected galvanostatic polarization with deionized (DI) water injection around 24 h. Surprisingly, there is  not much appreciable performance loss during this step (Step III), which could be possibility of hindrance in  penetration of cationic solution to the catalyst layer due to hydrophobic nature of GDL . Hence, MEA subjected to second soaking with 0.9 mM CaSO4, 29.1 mM H2SO4 and 1% (v/v) IPA for 100 h (Step IV). Consequently, the cell is exposed to DI water injection for 100 h (Step V). It is found that a steep voltage loss has been observed after second soaking. The well distributed Ca2+ion in the membrane after the soaking cationic solution was gradually moved and accumulated to the cathode side, resulting in performance loss.

The performance recovery test was carried out with injecting 1mM H2SO4 with 1% (v/v) of IPA for further 140 h (Step VI). As there was no considerable performance gain observed at step VI, the cell was disassembled and MEA was reprotonated in 1M H2SO4for 100h and a big jump in performance recovery was observed (step VII). In order to compare the effect of contaminant and recovery efforts, the cell data (Cell #1)  was compared with performance of MEA without contamination (Cell # 2), during this step in order to maintain the same water level at cathode the DI was injected. The cell #2 has no remarkable performance loss up to 400 h of continuous operation, where as in the case of Cell #1, even after the recovery efforts also it did not matched with Cell #1 data.

To analyze the performance loss of Cell #1 during long term operation, a cross-sectional Scanning Electron Microscopic images were taken and compared with Cell #1 (Figure 2). In this, it is observed that huge catalyst layer thickness loss (thinning) for Cell#1 in compared to Cell#2. These studies confirm the cathodic contaminant not only affects the proton conductivity, water transport and reactant transport, it also severely enhances the carbon corrosion rate at the catalyst layer. The further electrochemical, morphological and spectroscopic studies are in good agreement with our conclusions. 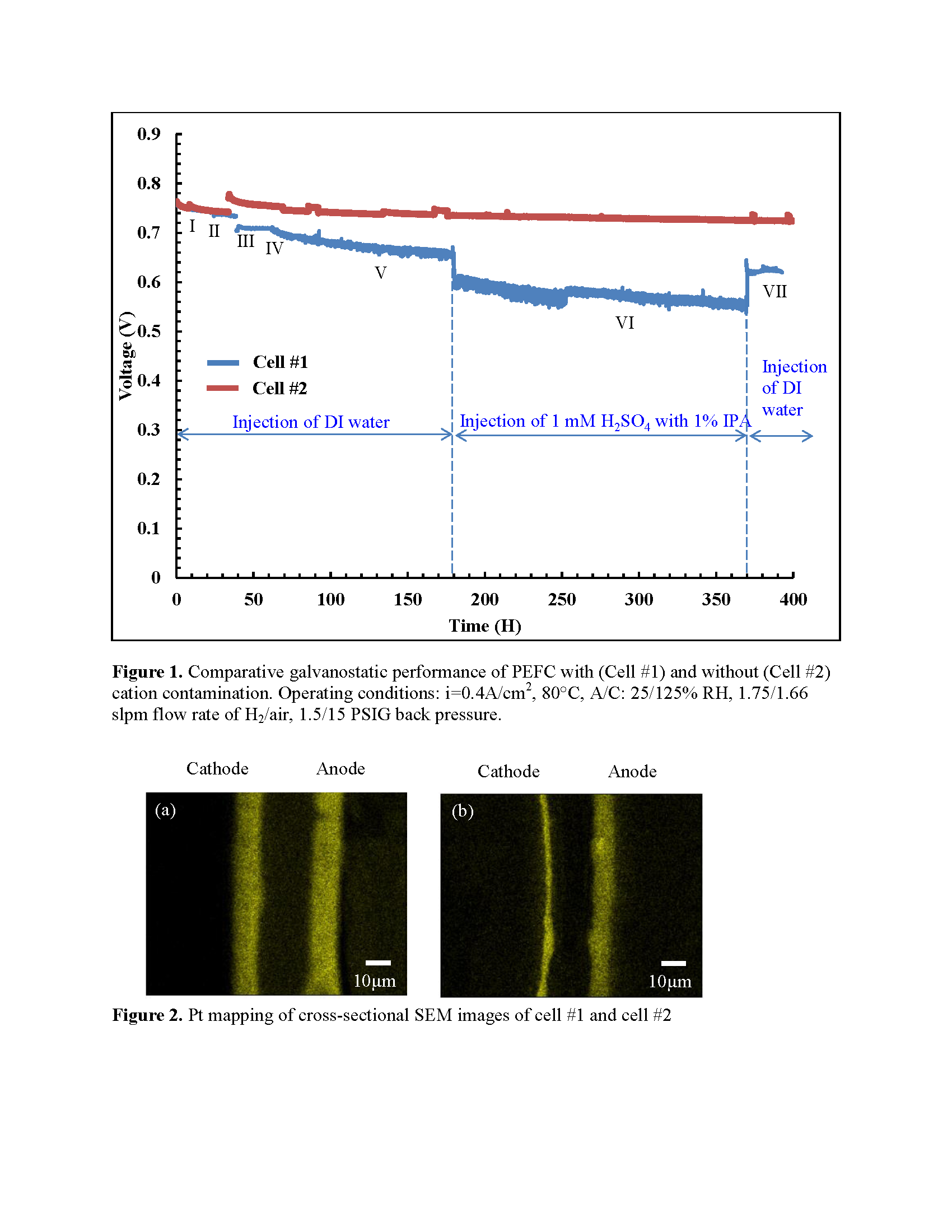