1812
Study of the Supported Catalysts Core-Shell Type of Gold and Palladium: Analysis of the Reaction Products and Mechanism for the Electrooxidation of Ethanol in Alkaline Medium

One way to study the reaction and propose a reaction mechanism for an electrochemical process is using in situ FTIR spectroscopy. For example Tremiliosi-Filho et al., [2] propose an accepted mechanism of ethanol oxidation on gold by FTIR in situ, while Zhou et al., [3] studied the adsorption and oxidation of ethanol on polycrystalline Pd. Since, palladium is more electroactive for ethanol electrooxidation than gold, in this work, the effect of a supported catalyst core-shell Au-Pd, in different proportions were studied.

In this work, the preparation of core-shell catalysts supported Au-Pd/C, in different ratios detailed. The characterization of the catalysts was performed using X-ray diffraction, Energy Dispersive Spectrometer (EDS), transmission electron microscopy (TEM), and electrochemical tests, to calculate the real electroactive area. Cyclic voltammetry tests showed that for the case of Au-Pd catalysts, the parameters like onset and density current oxidation of ethanol were better in relation to gold and palladium alone. This is due largely to the gold produces a stable nucleus where Pd nanoparticles can be dispersed better. On the other hand, the in situ FTIR studies showed an identical oxidation of Au and Pd in an alkaline medium with acetate ion with main product, but variations are also observed in the symmetry and intensity of the collected peaks, this has to see strongly with different intensities bond between ethanol and Pd onset of oxidation.

In conclusion, in this study it was found that the Au-Pd catalysts show better electrocatalytic properties that gold and palladium catalysts. This leads to a more efficient oxidation of ethanol, and use less amount of Pd in the anode catalysts.

[2] Tremiliosi-Filho, G., et al. "Electro-oxidation of ethanol on gold: analysis of the reaction products and mechanism." Journal of Electroanalytical Chemistry444.1 (1998): 31-39. 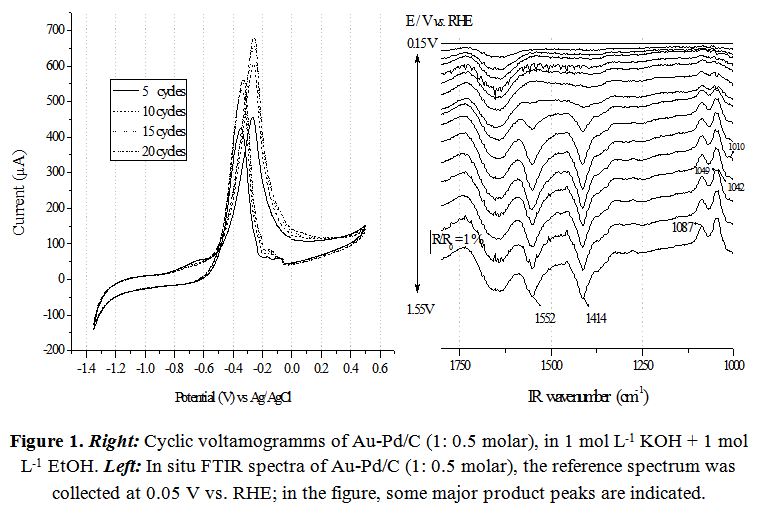