1217
Electrochemical Separation and Purification of Astatine for Radiopharmaceutical Application

The second longest lived isotope Astatine (211At: T1/2=7.5 h), is one the most promising α-emitters for targeted cancer radiotherapy. The liquid/liquid extraction method has been shown to provide good separation of 211At from bismuth metal.  However, of the liquid/liquid (L/L) extraction (separation) steps [1] used in the current manual isolation procedure presents a significant challenge due to the nature of the diisopropyl ether / hydrochloric acid (DIPE/HCl) and diisopropyl ether / sodium hydroxide (DIPE/NaOH) mixtures.  The present work is focused on to evaluate the feasibility of electrochemical methods in the purification of 211At.  This approach will be an alternative to hydrogen astatide (H211At) wet distillation.

At the present time, Bi (III) is considered the primary contaminant from which 211At must be electrochemically purified.  The initial electrochemical studies were conducted with iodine as an astatine segregate in bismuth solution. As the concentration of astatine in the original solution is much lower than micro molar levels, there are two different approaches have been adopted; (i) separation of bismuth from the original solution [Ref 1; step 4] through electrodeposition and (ii) direct extraction of iodine from the original solution [Ref 1; step 3 or 4]. Figure 1(a) shows the cyclic voltammograms (CV) for bismuth on various substrate electrodes; namely Pt, Au and glassy carbon (GC). In these, the GC substrate found to be the suitable martial than others, which could be due to surface nature of carbon. In the case second approach, initially, iodide separation was carried out without bismuth in an acidic electrolyte with various concentrations of iodide to identify the suitable substrate material and minimum separation levels. Figure 1(b) shows the model CV for iodide on Pt electrode, surprisingly iodine deposit was also observed at the working electrode. Conversely, there are no characteristic electrochemical peaks and deposits were observed for GC and Au. This study indicates iodide can be extracted with Pt electrodes and Pt catalyzes the reactions.

Financial support from the Department of Energy (DOE) is greatly acknowledged.  Selvarani Ganesan is thankful for subcontract from the Pacific Northwest National Laboratory (Contract No. 244236; PI: Matthew J O'Hara). 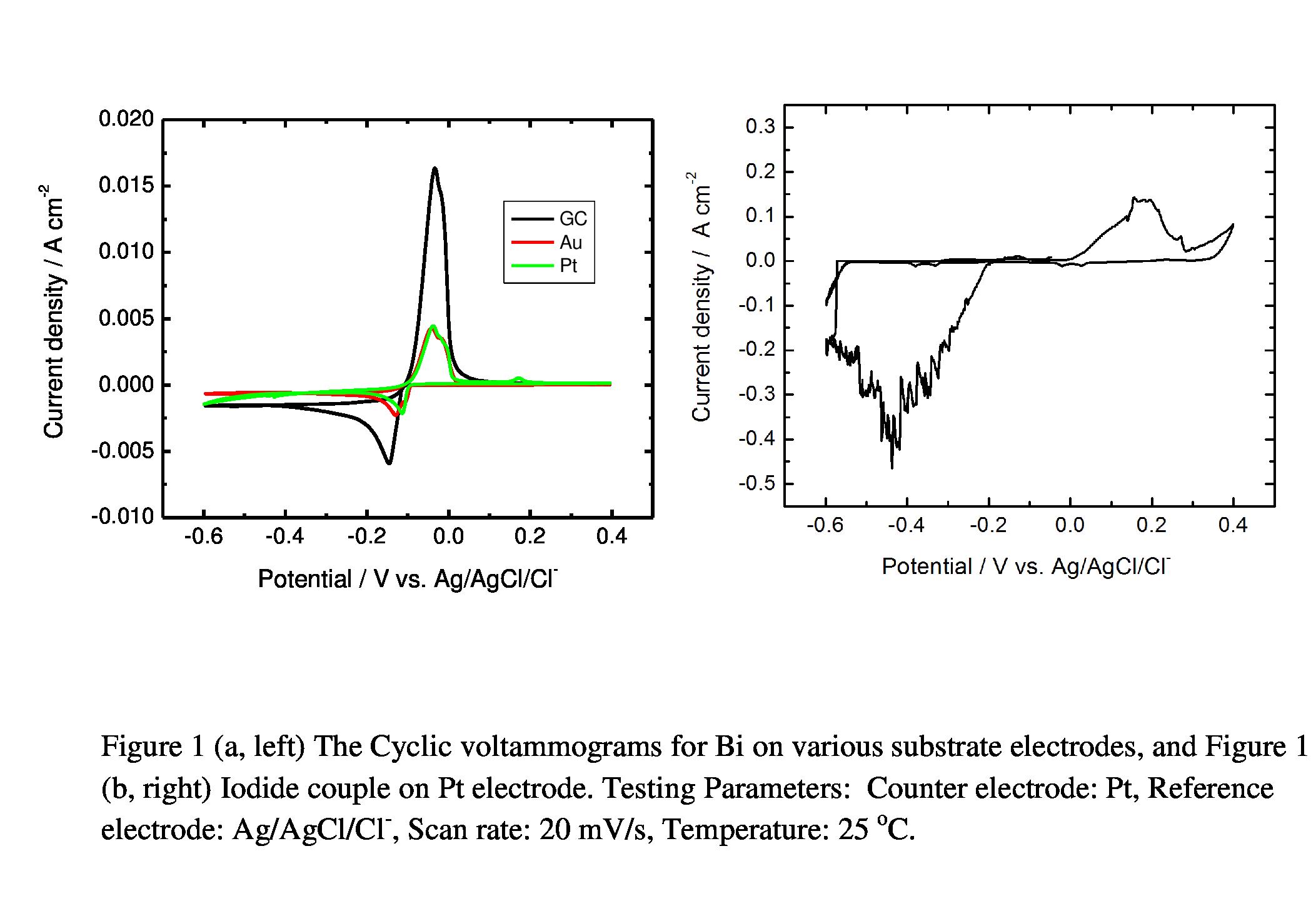