Continental Room A (Hilton Chicago)
K. Mishra (University of South Carolina), J. Xiao (Pacific Northwest National Laboratory), W. Xu (Pacific Northwest National Laboratory, USA), J. G. Zhang (Pacific Northwest National Laboratory), and X. D. Zhou (University of South Carolina)
The efficiency of a hybrid electric vehicle (HEV) is greater than that of pure petroleum based vehicles because of the use of regenerative braking and suspension in HEVs, which helps to minimize energy loss and recover the energy used to slow down or stop a vehicle. In addition, HEVs have lighter engine because HEV engines can be sized to accommodate average load, not peak load, and lighter vehicle weight because special lightweight materials can be used in their manufacture.  Much of research on the electrochemical storage for HEVs has focused on circumventing a so-called “range anxiety”, which alludes to two most fundamental parameters of electrochemical batteries: energy density and power density. In other words, in a HEV, the low energy density of a fix volume battery package results in a limited mileage range, and (2) long recharge time is often needed, compared with the fast process of refueling a tank. Equally important factor to be considered in developing commercial HEVs is the capacity loss in lithium-ion batteries largely due to the chemical changes of the electrodes during cycling processes. Numerous factors contribute to the capacity loss of a lithium-ion battery, including electrolyte solvent decomposition, active material dissolution, phase transition, abrupt lithium dendrite formation, passive layer deposition, and so on. During the past few years, extensive research on the capacity fade of Si-based electrodes has revealed the origin of a continuous growth of solid electrolyte interfaces (SEI).1,2 Fluoroethylene carbonate (FEC) was found to be capable of achieving improved capacity retention as an additive or a co-solvent.1,2

These results demonstrated that FEC as co-solvent significantly improves the performance of the Ge electrodes in a binary or ternary solvent electrolytes. Post analysis is carried out by using scanning electron microscopy and x-ray photoelectron spectroscopy to relate the SEI structure – electrochemical property relationship in our battery system. A continuum mechanics model is developed by considering the reduction and of diffusion of solvent.  The model will be used to extract solvent diffusivity and predict the thickness of SEI layer in both Ge- and Si-based electrodes in binary and ternary compounds by using experimental data of Ge electrodes from this work and Si-based electrode in literature. 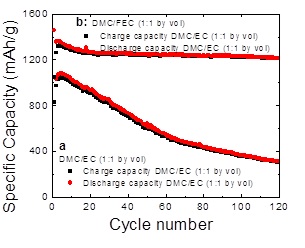