Salon C (Hilton Chicago)
K. Mishra, J. Isenhower, and X. D. Zhou (University of South Carolina)
High capacity negative electrode materials such as silicon and germanium have been known to undergo massive volume change during lithiation/delithiation process. The large volume expansion in Si (~400%) and Ge (~280%) has been attributed to the fracture of the electrode materials, delamination from the current collector and losing contacts with the binder, resulting in rapid loss of capacity.1

Here we report our studies on the effects of particle size on the electrochemical performance of Ge electrode. Ge particles of different sizes (0.1-0.3, 0.3 -0.5, 0.8-1, >1 µm, ) are obtained by varying the time of ball milling and their capacity performances were measured by assembling a coin cell with the lithium metal as the counter electrode.

The obtained results displayed the rapid capacity loss of the electrode with Ge particle size >1 µm, while the ones up to ~0.5 µm displayed significant stability. For the first 40 cycles tested, the Ge particles up to 0.5 µm retained ~90% of the initial charge capacity, and the ones with particle size 0.1-0.3 µm retained more than 95% of the initial charge capacity at the current density of 500 mA/g . For the Ge particle size > 1µm, the capacity retention even at the low current density of 100 mA/g at the end of 40 cycles was measured to be ~37%.

This result demonstrates that above an optimum size, the Ge electrode exhibits rapid degradation of the performance. Further work is being carried out to determine the optimum size of the Ge electrode which yields a stable electrochemical performance. Fracture behavior of the Ge particles based on fracture mechanics will be reported. Theoretical analysis based on a rigorous continuum mechanics model will be used to extract critical size for Ge-based electrodes. 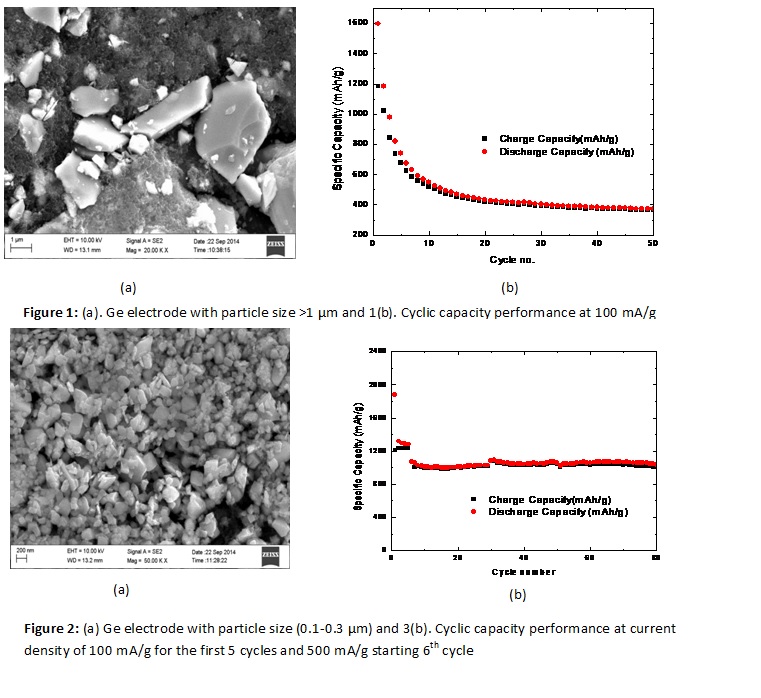