An electrochemical biosensor for cholesterol has been developed based on carbon nanaotube and gold nanoparticle hybrid materials. A free standing buckypaper electrode composed of functionalized multiwallled carbon nanotubes (MWCNT) and gold nanoparticles (AuNP) has been used as electrode in an electrochemical biosensor for cholesterol. Carbon nanotubes (CNTs) have been recognized as one of the most promising electrode materials[1,2] due to their high chemical stability, good electrical conductivity, and tubular structure . On the other hand gold nanoparticles exhibit quantum size effects leading to unique optical, electronic and catalytic properties. AuNPs enhance the electrode conductivity and facilitate the electron transfer, thus improving the analytical sensitivity and selectivity[3]. Due to their compatibility with biolmoecules gold nanoparticles are widely used in medical diagnosis area. The combination of AuNPs  and  CNTs creates a new nanohybrid material with the integrated properties of the  two components. This nanohybrid material can offer new opportunities for the development of biosensors with high analytical performance. In this work we have created a thin sheet of nanohybrid material, commonly known as buckypaper( thickness~50-60micron). Buckyppaer shows better electrochemical signal [4] compared to the dispersion formed by  MWCNT and gold nanoparticles. We have reported that work earlier [4]with respect to several biomolecules such as tyrosine, tryptophan, myoglobin and glucose[5]. Due to the enhanced surface area, engineered CNT buckyppaer shows much enhanced signal and higher sensitivity.

For this cholesterol biosensor, Cholesterol oxidase has been immobized on AuNP modified buckypaper. In addition to that buckypaper with carboxyl functionality was also modified by 1-Ethyl-3-(3-dimethylaminopropyl)carbodiimide, (EDC)  and N-hydroxy succinimide(NHS) and after this activation cholesterol oxidase was immobilized. These two series of Buckypaers were used as electrodes. biosensor.

Cholesterol was dissolved in 10mM tritobn X and different solution of cholesterol were made using 0.1 M phosphate buffer solution. Cyclic voltametry, amperometry and differential pulse voltammetry techniques wesr used to study the electrochemical behavior of this biosensor and to determine the sensitivity. Above figures show DPV results and the calibration plot  obtained for cholesterol solution concentration ranging from from 0.2-1mM/L using AuNP –MWCNT hybrid buckypaper/. A detection limit obtained was 3 mmole/L which is higher than many reported biosensors based on other CNT dispersion based biosensors. 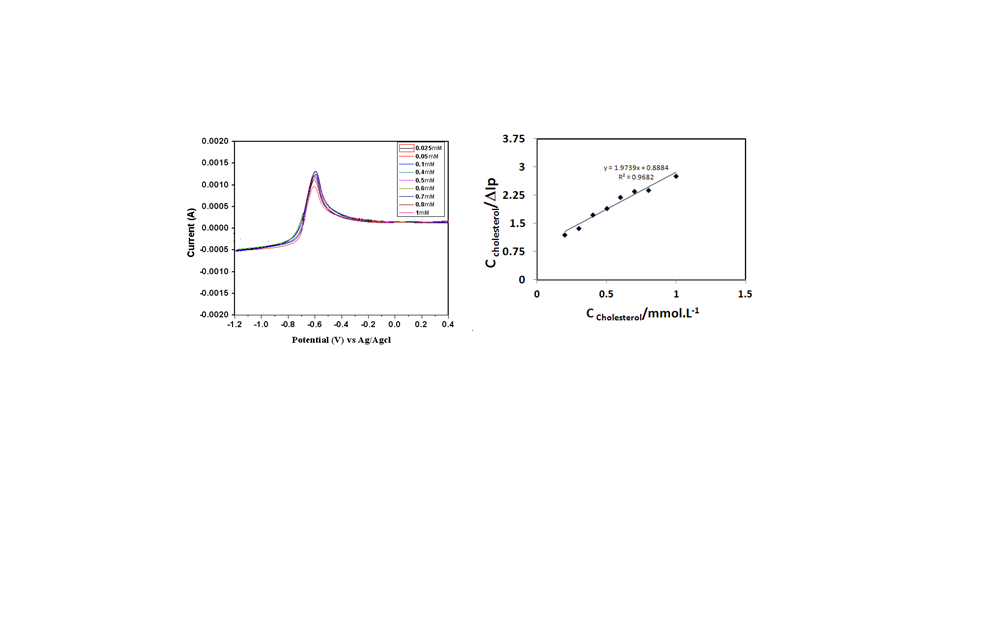