1196
A Comparison of Electrochemical ORR Activity of Boron in Graphene Oxide; Incorporated As a Charge-Adsorbate and/or Substitutional p-Type Dopant

PDR 3 (Hilton Chicago)
E. Pourazadi, A. I. Minett, and A. T. Harris (The University of Sydney)
The present contribution aims to examine electrocatalytic oxygen reduction (ORR) performance of boron (B) in two diverse classes of B-doped graphitic materials; (i) 3-D graphene organic framework (GOF) as a descriptive of adsorbate-induced doped materials and (ii) BGs as illustration of the substitutionally boron-integrated graphene. Pillared GOF is easily synthesised under mild solvothermal condition (reaction temperature of 80 °C for 8 h) by reacting graphene oxide (GO) suspension with 1,4 phenyl diboronic acid as stitches to graphene layers. Trivalent boron is integrated into sp2 graphene honeycomb structure using thermal annealing method which is believed to produce fewer layer graphene with less agglomeration, higher surface area and electrical conductivity. Here, for tuneable boron surrogation, mixtures of GO and boric acid (H3BO3, as precursor) are annealed at elevated temperatures of 600 and 1200 °C to form substitutionally boron-doped BG1 and BG2. X-ray photoelectron spectroscopy (XPS) analysis verified the total embedded boron contents of 1.90 and 4.19 at% corresponding to BCO2 and BCO2/ BC3 structures in BG1 and BG2, respectively.

The electron transfer efficiency of the state of the art pillared boronate lattices with CBO2 active chemistries is examined alongside the commonly literature cited boron doped materials (BGs) via cyclic voltammetry (CV) and rotating ring disk (RDE) tests. Generally, collected CV data confirms noticeable catalytic modulation of pristine GO by synergistic electron accepting-donating effect of amalgamated boron in GOF and BGs. In fact, the difference in electronegativity of boron and its neighbouring (C/O) atoms’ provides positively charged site for O2 chemisorption. Subsequently, B enables to donate a portion of accumulated C=C π conjugation to the adsorbed oxygen from its 2pz orbital and finally reduces the adsorbed oxygen.

The materials are also subjected to RDE test to obtain Koutechy-Levich plots for estimating the total number of exchanged electrons during O2 reduction. According to cathodic responses, BG1 completes the ORR in a way similar to that of reduced graphene oxide (rGO) through a 2e- pathway with H2O2 production. This in turn highlights the insignificant functionality of boron during O2 reduction when it is in CBO2 form. However, ahead of incorporation of three-coordinated BC3 in BG2 sample, the reaction is managed by a 4e- reduction mechanism to produce H2O. This enlightens the frontier-controlling role of boron as an effective donating pole when it is in BC3 configuration. Surprisingly, GOF shows an exclusive performance comparable to that of BG2 (with highly active BC3 configuration) which is synthesised under much more rigorous thermal condition.

To conclude, GOF has potential to be considered as a rival to previously introduced graphene doped materials for replacing the expensive Pt/C cathodic catalyst in fuel cells. The advantage of GOF compared to conventional BG materials through literature is considered to be due to the merits of moderate hydrothermal synthesis conditions and hence scale-up capability. 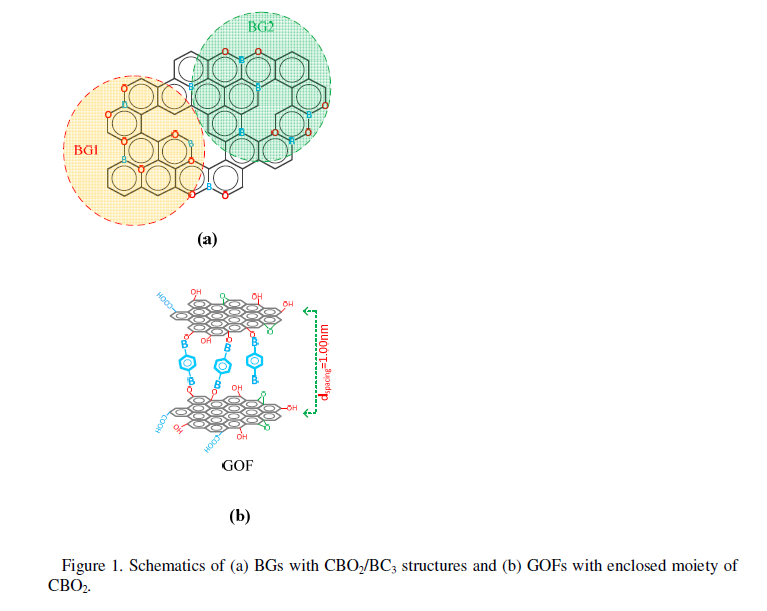