Currently, detection of potentially infected trees is mainly based on a visual tree assessment, to inspect for signs and symptoms associated with the disease. However, this method can only be used to identify the infection at a late stage of the disease. In addition, it cannot provide any identification of the fungi involved. An accurate and early identification of fungal infection in orchards is critical to control the rapid spread of the fungal agents.

The novel 2- dimensional temperature-programmed technique, in time and distance along the length of the GC-column, provides a negative temperature gradient. The temperature is hotter in the center (inlet of the column) than the perimeter (outlet) of the micro-GC using a linear temperature profile. As the sample passes through different temperature zones, the diffusion rate changes so that the front of the separation peak moves slower relative to the trailing edge of the peak; thereby, improving the resolution of the compounds passing through the column. As a result, for a given number of theoretic plates, a shorter column length can be used. Typically, shortening the length of a GC column reduces the analysis time at the expense of resolution; however, thermal refocusing of the eluting band will improve the resolution of the shorter columns. The gradient along the column continuously refocuses the eluting bands, offsetting part of the chromatographic band spreading, and consequently sharpens the peaks as they move down the column.

In order to investigate the 2-D temperature gradients induced by the heater on previously fabricated GC-MEMS silicon, the heater was designed and simulated using COMSOL Multiphysics® (Figure 2). The 3D simulation was performed by coupling the electric current and heat transfer. Simulation results reveal the temperature distribution of the GC column and calculate the maximum temperature at 4 different locations (0.46, 36.18, 78.24, 300.12 cm from the inlet of the column. (Figure 3). Furthermore, the transient response of the 2-D heater was obtained for these locations and fitted into the transient lumped equation to extract the time constants (τ) of the transient response curves (Table 1)

The simulation data was validated by connecting the GC column to a micro-fabricated TCD sensor. 2 µl of volatile compounds were injected into the system at helium flow rate of 1 mL/min and the power across the sensor was set to 6.4 mW. The results are shown in Figure 4. 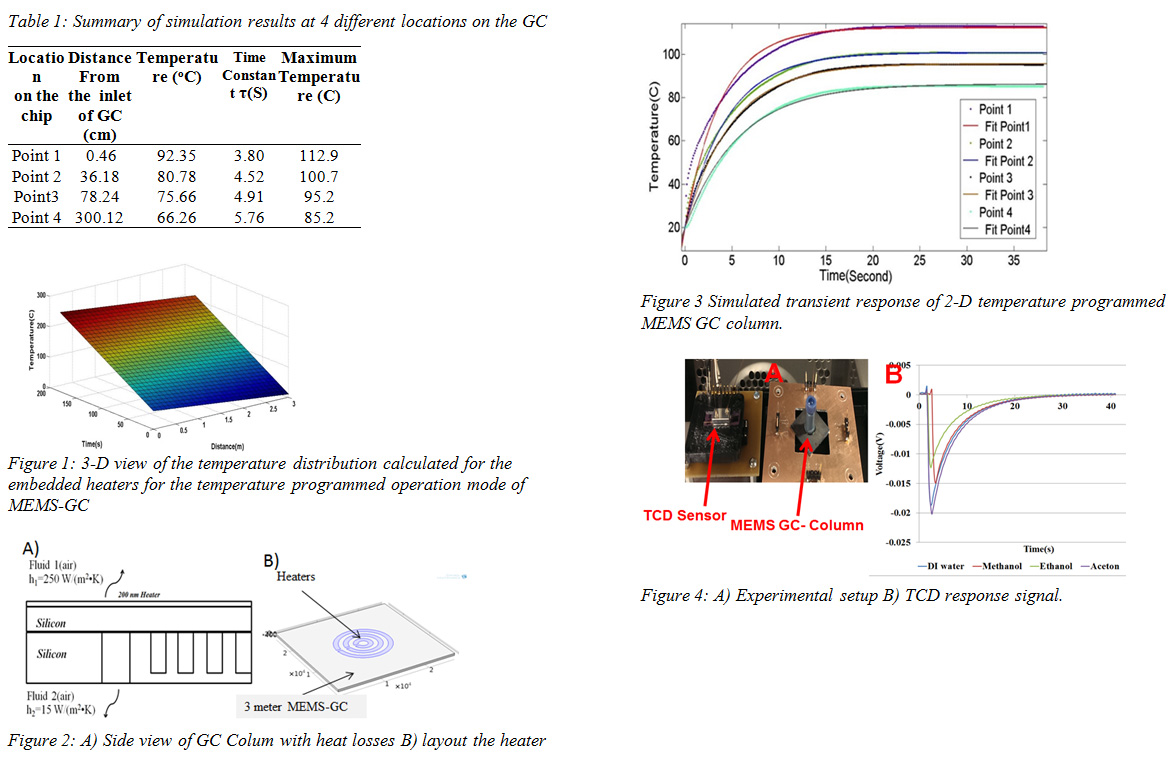