1630
(Invited) Capabilities of Analytical Transmission Electron Microscopy for the Analysis of Structural, Chemical and Electronic Properties Exemplified by the Study of Y-Doped (Ba,Sr)(Co,Fe)O3-δ

We will illustrate the capabilities of analytical TEM for the example of (Ba0.5Sr0.5)(Co0.8Fe0.2)O3-δ (BSCF) which is a promising and highly complex material for oxygen separation membranes. BSCF suffers from degradation of the oxygen diffusivity at temperatures below 840 oC which is attributed to the decomposition of the cubic phase into several secondary phases [1,2]. Composition and crystal structure analyses of the different phases combined with Co-valence state determination sheds light on the origin of the instability of the cubic phase. Indispensable is the determination Co-valence state in the cubic and hexagonal BSCF phases which required the introduction of a new evaluation technique due to the overlap of the Co-L2,3ionization edges with ionization edges of other elements in BSCF [3].

Doping with Yttrium has been used to stabilize the cubic Sr1−xYxCo1−yYyO3−δ phase [4] which also appears to be a promising strategy for BSCF. Substitution of B-site Co- and Fe-cations in BSCF by Y3+‑cations with a fixed valence state should lead to the stabilization of the Co-valence and, hence, the stabilization of the cubic BSCF phase. The volume fraction of secondary phases is indeed substantially reduced in Y-doped BSCF. Only the hexagonal BSCF phase is observed which is confined to grain boundaries (Fig. 1). In contrast, a large volume fraction of different secondary phases is found in undoped BSCF (Fig. 2). A closer inspection suggests, however, that the suppression of secondary phases in Y-doped samples could be partially related to the lack of nucleation sites rather than the stabilizing effect of Y-doping. To achieve an improved understanding of the effect of Y-doping, the occupation sites of Y-cations were analyzed by atom location by channeling enhanced microanalysis (ALCHEMI) as proposed by Spence and Taftø [5]. ALCHEMI analyses demonstrate that Y-cations occupy A- and B-sites. Despite substitution of B-site cations, 25 % to 40 % of the Y-cations occupy A-sites depending on the doping level. This indicates the complex effect of Y-doping in BSCF which will be discussed. 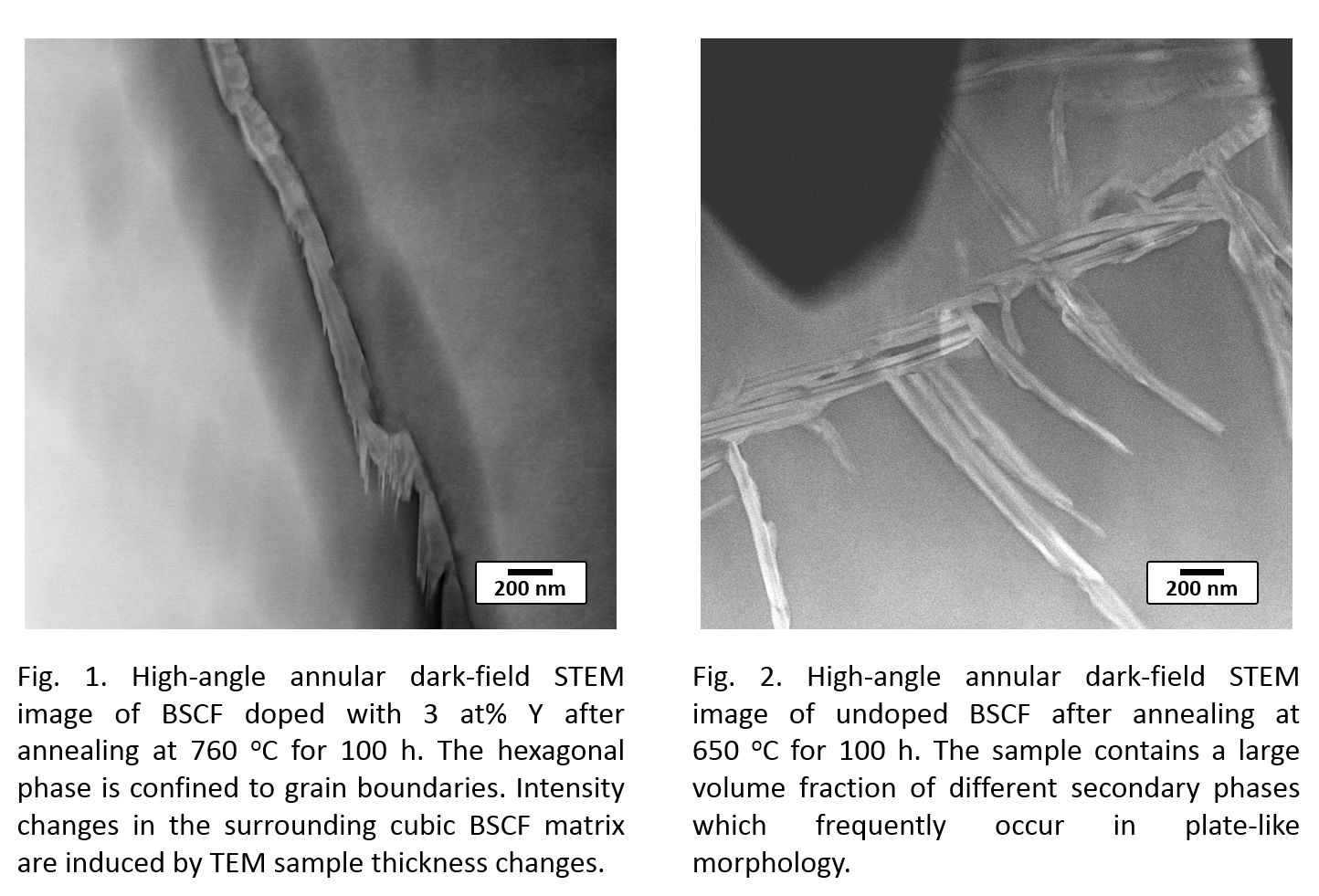