Riverside Center (Hyatt Regency)
D. Y. W. Yu, W. Kang, P. K. Lee, and C. S. Lee (City University of Hong Kong)
In the past two decades, lithium-ion batteries (LIBs) have been widely used to power portable devices such as laptops, cell phones and power tools because they can provide high energy and power densities. However, the limited lithium resources and the geographic locations of these reserves have led to a high price of LIBs. Low-cost alternatives such as sodium-ion batteries (NIBs) have attracted intense attention due to the high and uniform abundance of sodium across the world. For cathode material, O3 and P2-type layered oxides of NaxMO2 (M = Ni, Co, Mn, Fe, Cr, etc.) have been widely investigated in the last few years. In particular, manganese-based cathode (P2-NaxMnyMzO2) has attracted much attention because manganese is low-cost and earth-abundant. These materials can give an impressive initial capacity of up to 210 mAh g−1 at a low current rate with a voltage plateau of around 2.0-2.2 V vs. Na/Na+ due to the redox couple of Mn3+/Mn4+. However, rate performance and stability of the material is poor. In this study, we studied the effect of Cu substitution on the performance of P2- Na0.67CuxMn1-xO2. Even though the capacity is reduced, rate and cycle performances are significantly improved.

Na0.67CuxMn1-xO2 (x = 0, 0.14, 0.25 and 0.33) samples were synthesized by a sol-gel route: 3.33 mmol sodium citrate tribasic dihydrate, 15 mmol of manganese acetate tetrahydrates and copper acetate monohydrate (both Aldrich) with a molar ratios of 1:0, 6:1, 3:1 and 2:1 for x = 0, 0.14, 0.25 and 0.33 were first dissolved in 25.0 mL distilled water. Then the solution was stirred at 90oC to remove the water to form a gel-like mixture. The gel was further dried at 200oC for 12 h to obtain a powder. The powder was ball milled for 1 h and made into a pellet for calcination in air at 900oC for 15 h. The materials were then coated on aluminum foil after mixing with carbon black and polyvinylidene fluoride in N-methyl-2-pyrrolidinone solvent with a weight ratio of 80: 10: 10. Coated foils were dried at 80oC, pressed and then punched into discs with a diameter of 16 mm and a packing density of ~2.3 g cm-3. The electrode discs were then dried at 110oC for 4 h in a vacuum oven and transferred to an Ar-filled glove box. Sodium metal and glass microfiber (Whatman, GF/A) were used as counter electrode and separator, respectively. NaClO4 (1 mol L-1) in propylene carbonate (PC) with 5% fluoroethylene carbonate (FEC) was used as the electrolyte.

Micron-sized plate-like copper-substituted layered P2-type Na0.67CuxMn1-xO2 materials are formed after the syntheses. Sample without Cu shows a high capacity of about 180 mAh g-1 at a current rate of 10 mA g-1, however, rate performance and cycle performance is poor (Fig. 1). With Cu substitution, the average charge-discharge potential is increased due to Cu2+/Cu3+ reaction at 3.7-3.9 V vs. Na/Na+. Even though the overall capacity is reduced due to the decreased reaction of Mn, the substituted material demonstrates excellent rate and cycle performance. It can be fast charged and discharged within 5 minutes while giving a capacity of more than 90 mAh g-1, corresponding to a half cell energy density of 260 Wh kg-1 at a power density of 3000 W kg-1, which is comparable to values that can be obtained from high-power lithium-ion cathodes. The materials show excellent stability, keeping more than 70% of the initial capacity after 500 cycles at 1000 mA g-1 (Fig. 1c). The good cycle and rate performances of the materials are attributed to copper in the lattice, which stabilizes the crystal structure, raises the average discharge potential and improves sodium transport. This makes Na0.67CuxMn1-xO2 an ideal choice as cathode for high-power sodium-ion batteries. Material characterizations and performances will be further discussed at the meeting. 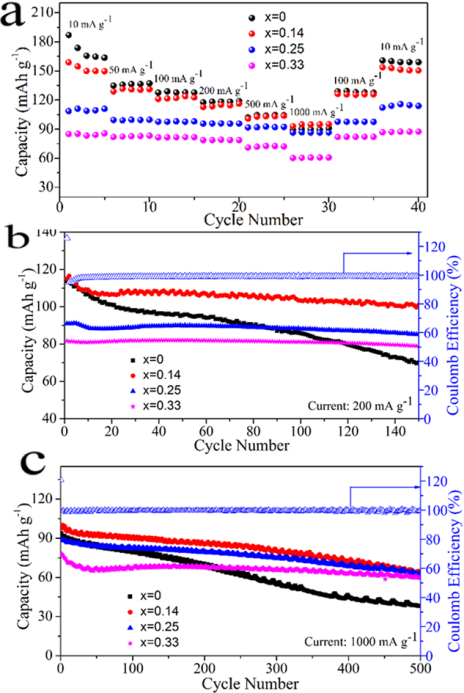