Energy storage has become a key issue concerning our welfare in daily life; the increasing claim for powering systems has conducted energy storage to become a figuring topic.

In this regard, lithium-ion battery technology has attracted a respectful interest thanks to its suitable and attractive properties as a powerful source for high voltage applications such as cellular phones, digital cameras and hybrid electric vehicles.

Unfortunately, the little abundance of this alkali metal in the earth’s crust, its evil extraction impact on the environment, restricted its use in lithium ion batteries. In this context, sodium has drawn a wide attention thanks to its abundant resources and low cost. Sodium has a larger ionic radius (1,02 Å) and higher redox potential (-2,71 V vs SHE) of Na+/Na compared to  Li and  operates in a similar fashion.

Indeed, we investigated the NaxCo1-yTiyO2 solid solution with the aim to obtain better performances with reduced cost. P2-Na2/3Co1/2Ti1/2O2 selected phase was synthesized by solid-state method. This material offers a specific capacity of 100 mAh/g in the [2-4.2V] potential window. A good capacity retention of the Na// Na2/3Co1/2Ti1/2O2 cell was recorded with a coulombic efficiency approaching 99%. An ex-situ XRD study on the NaxCo1/2Ti1/2O2 sample evidenced that the P2-type structure is preserved until the end of the charge process where a structural transformation occurs leading to structurally faulted oxidized phase.

The financial assistance  of the office Chérifien des Phosphates in the Moroccan Kingdom (OCP group): The authors are hereby acknowledged. Ms N. SABI is grateful to Mohammed VI Polytechnic University for the scholarship. 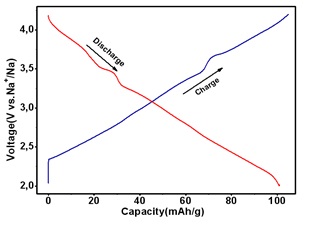