The SnO2 material has been considered as a promising lithium-ion battery anode candidate, and recently, the importance has been increased due to its high performance in sodium-ion batteries. Tin oxide (SnO2) has been studied as a promising alternative to the commercially used graphite anode material because of its much higher theoretical specific capacity 1491 mAh/g [1, 2].

Thickness of thin films was measured using spectroscopic ellipsometry UVISEL 2 UV-Vis-NIR, and corresponded 75-80 nm. Surface morphology were obtained by scanning electron microscope Mira Tescan. Valence state of tin was studied by X-ray photoelectron spectroscopy (XPS). Electrochemical study of obtained thin-film electrodes was also carried out. The voltage of cycling was ranged from 0.01 V to 0.8 V. Current density was 25 µA/cm2. During cycling tests was shown that tin oxide has a stable discharge capacity about 900 mAh/g during 500 charge/discharge cycles, with efficiency about 99,5 %, fig.1. Capacity fluctuations likely to be associated with changes in ambient temperature.

Financial support was made by Ministry of Education and Science of Russian Federation. Unique identifier of the project is RFMEFI57814X0096. 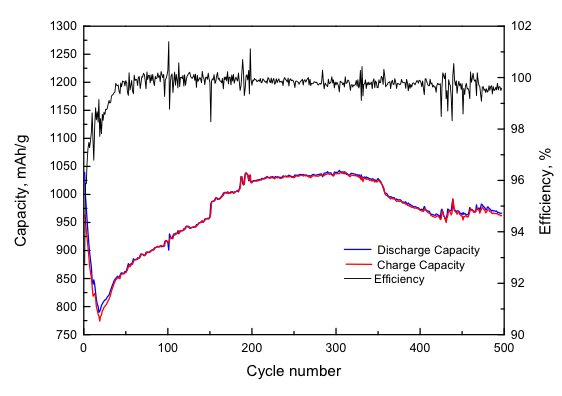