La2NiO4+δ and Pr2NiO4+δ are known as mixed conductors and are candidates for SOFC cathodes [1]. SOFC cathodes are frequently used with a ceria buffer layer to avoid any reaction between the cathode and the zirconia electrolyte. We investigated the properties of Pr2NiO4+δ and La2NiO4+δcathodes and the influence of the ceria buffer layer on the cathode properties. We also investigated the phase compatibility of those cathodes with ceria (GDC) and zirconia (8YSZ).

First, La2NiO4+δ and Pr2NiO4+δ cathode materials were synthesized by employing a solid-state reaction at 1300oC. The cathode materials were ball-milled. The mean diameter of the grain of the cathodes was about 1 micron. Each material was in a single phase. The cathode slurries were printed on a Ce0.8Sm0.2O1.9 (SDC) spin coated buffer layer on an 8YSZ (0.2 mm thick) electrolyte. The cathode sintering temperature was 1100oC. Pt was used for the anode and reference electrodes. Three-terminal AC impedance measurements were conducted before and after the DC current loading processes (106 mA/cm2 and then 354 mA/cm2) at 800oC in air. The phase compatibility of the cathode with ceria or zirconia electrolyte was examined with x-ray diffraction analysis. The cathode and Ce0.9Gd0.1O1.95 (GDC) or 0.92ZrO2-0.08Y2O3 (8YSZ) powders were mixed and sintered under the same conditions as the cathode sintering process (1100oC for two hours). Then their crystal structures were examined with an x-ray diffractometer.

The impedance plots for those cathodes at 800oC are shown in Fig.1.

They were measured after a DC current loading of 354 mA/cm2 for 55 hours. The cathodes had a similar grain size, but the Pr2NiO4+δ cathode had a smaller interface resistance than the La2NiO4+δ cathode. To examine the influence of the reaction between and 8YSZ electrolyte, we also fabricated cells without the SDC buffer layer. The impedance plots for the cathodes without the buffer layer are also shown in Fig.1. The interface resistances for Pr2NiO4+δ and La2NiO4+δ cathodes without the SDC buffer layer are smaller than those with the SDC buffer layer. This shows that the SDC buffer layer degraded rather than improved the cathode performance. Fig.2 shows the X-ray diffraction patterns of the mixture of Pr2NiO4+δ powder and electrolyte powders (GDC or 8YSZ) sintered at 1100oC. The Pr2NiO4+δ reacted completely with the GDC and produced Ce(Pr)O2-δ or Ce(La)O2-δ and NiO. This shows that Pr2NiO4+δ is highly reactive with cerias including GDC. The reaction products of the mixture of cathode and 8YSZ are also shown in Fig.2. After sintering, Pr2Zr2O7 was formed, but Pr2NiO4+δ remained. This shows that the Pr2NiO4+δ reacts with zirconias in the cathode sintering process. But the interface between Pr2NiO4+δ and zirconias are more stable than that of Pr2NiO4+δ and cerias.

These results reveal that Pr2NiO4+δ and La2NiO4+δ cathodes without an SDC layer outperform those with an SDC layer. 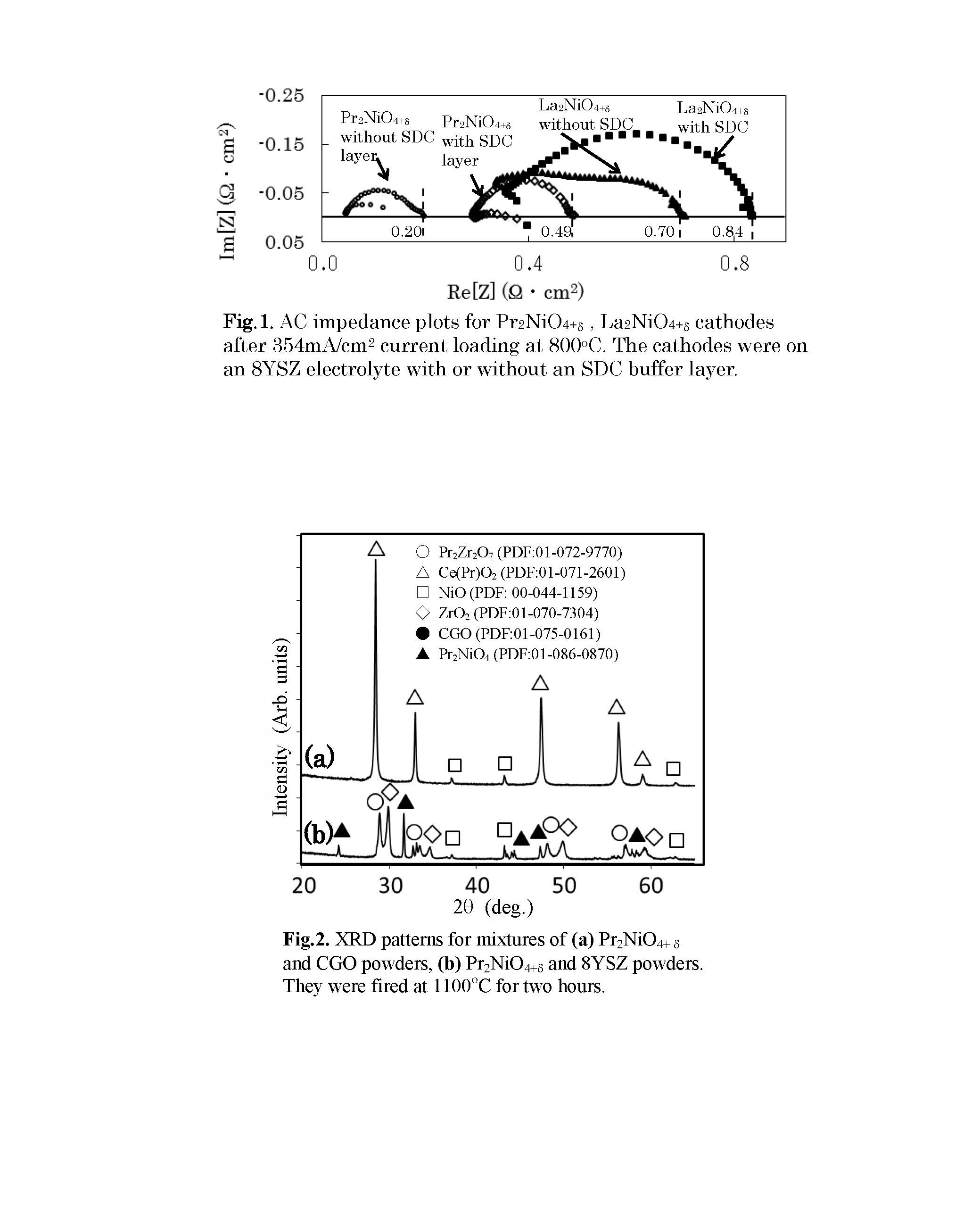