Lomond Auditorium (Scottish Exhibition and Conference Centre)
S. S. Shy, Y. D. Hsieh, and J. D. Liang (National Central University)
How to reduce effectively the severe impact of various environmental and energy problems is one of the most important issues in our human society. This continues to drive the development of hybrid power generation systems aiming to achieve much higher efficiencies together with much lower emissions than conventional power systems. Among only a few available hybrid energy conversion systems, a pressurized solid oxide fuel cells (PSOFC) integrating with a gas turbine (GT) or micro gas turbine (MGT), the hybrid PSOFC-GT or -MGT power system, has the highest efficiency up to 70%. Moreover, the development of such hybrid PSOFC-GT or –MGT power system is not only beneficial for the environment, but also it is important to the consolidation of the fuel cell industry and the expansion of the gas turbine industry. Although several demos of the hybrid PSOFC-MGT power system have been established, many technical challenges existing in the design of such hybrid power system and its control still need to be solved in order to assure a stable operation among different components of the hybrid system. One of the most important technical challenges is the detail experimental information on electrochemical impedance spectra (EIS) of PSOFC, which is still rare in literatures. This motivates us to measure experimentally the effect of pressurization on EIS of PSOFC.

In this work, we measure the pressurization influence on power generating characteristics and EIS for both anode-supported and electrolyte-supported cells (ASC and ESC) using a recently-established high-pressure SOFC facility. It is worth of noting that the present study has an important advantage due to the fact that both ASC and ESC use the same single-cell setup, a planar full cell having 40 × 40 mm2 effective reactive area sandwiched by a pair of rib-channel flow distributors (interconnectors) on both anode and cathode, under exactly the same experimental conditions. Specifically, both ASC and ESC apply exactly the same flow rates (Qanode = 0.5 slpm H2 + 0.4 slpm N2 and Qcathode = 0.9 slpm air) at three operating temperatures (T = 750 oC, 800 oC, 850oC), each T under five different pressures (p = 1, 2, 3, 4, 5 atm), having a total of 30 data sets for comparison. Hence, a direct comparison of experimental EIS data and power generating characteristics between ASC and ESC at elevated pressures can be clearly made. To the best knowledge of the authors, the present measured EIS comparison between ASC and ESC is new, and experimental EIS data of pressurized electrolyte-supported planar SOFC are still not available in literatures.

These ASC and ESC measurements under the same experimental conditions suggest the following points: (1) At T = 850oC and 0.7 V, power densities of ASC/ESC increase from 309/193 mW cm-2 to 476/250 mW cm-2, as p increases from 1 atm to 5 atm. As T increases from 750oC to 850oC at 0.7 V, power densities of ASC/ESC increase from 175/97 mW cm-2 to 309/193 mW cm-2 at p = 1 atm, while at p = 5 atm, the corresponding increases of power densities are 281/137 mW cm-2 to 476/250 mW cm-2. It is found that ASC is more sensitive to pressurization than ESC, while the latter is more temperature-sensitive than the former. (2) The ohmic resistance is not varied with the loaded current density and it is independent of pressure for both ASC and ESC cases. Furthermore, ESC has higher values of the ohmic impedance, about 16 % larger, than that of ASC. The thicker the electrolyte thickness is, the larger the ohmic impedance is. (3) The polarization impedance decreases noticeably with increasing p for both ASC and ESC cases at either unloaded or loaded conditions. This explains why power densities increase with increasing pfor both ASC and ESC. (4) These measurements reveal that the better cell performance of ASC than that of ESC is not simply due to the larger ohmic overvoltage of ESC as previously predicted by numerical simulations. The variation of the polarization overvoltage between ASC and ESC also plays an important role.

We hasten to note that it is not sure whether the present conclusions can be extended to all ASCs and ESCs due to different electrolytes and anodes used in the present ASC and ESC, but these results should be of help in the further development of PSOFC integrating with micro gas turbines for future stationary power generation. 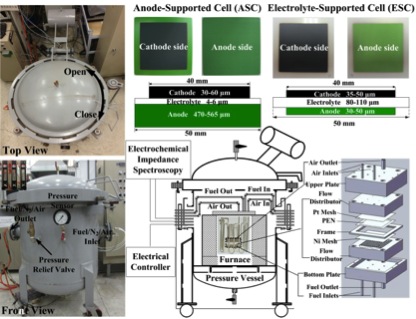