Boisdale (Scottish Exhibition and Conference Centre)
A. Toleuova (University College London), W. C. Maskell (University College London, Imperial College London), V. Yufit (Imperial College London), P. R. Shearing, and D. J. Brett (University College London)
Much interest is currently being devoted to solid oxide fuel cells (SOFCs) with liquid metal anodes.1–3 Technological developments of SOFCs operating with various molten anodes have been reviewed recently.4 Novel approaches to understanding this molten electrode system include the development of the Rotating Electrolyte Disc (RED)5. This technique offers the prospect of allowing the determination of parameters controlling mass transport of dissolved species in the melt. Development of the RED technique and of molten anode SOFCs requires careful probing of the fundamentals of operation. As such, a stepping stone to operation on direct solid fuel is the use of a simpler system such as the anodic oxidation of hydrogen at a liquid tin anode / YSZ interface.

This paper discusses the dissolution of hydrogen and its electrochemical oxidation at a liquid tin anode / YSZ interface. The approach is also suitable for use with other gaseous reactants (e.g. CO). An electrochemical model is developed, used for analysis and validated against experimental data. An important factor, w’, is proposed, which is a measure of the balance between the rate of dissolution of hydrogen in liquid tin and its rate of removal via anodic oxidation to water, which is of technological significance when designing such reactors.

To avoid any complexity associated with formation of metal oxide, including blockage of the electrolyte (a typical adverse effect) during operation of liquid tin anode SOFCs6, the cell was operated in a narrow potential window in which tin electrode was effectively “inert” and could not interfere in any electrochemical reactions (Figure 1). The lower limit of operating potential was set by the Sn-SnO2 couple and the upper limit by generation of electronic carriers in YSZ.

Hydrogen with partial pressures ranging from 8 to 26 kPa was supplied to the liquid tin anode and anodically oxidised at the liquid tin / YSZ interface on the inner surface of a 8YSZ tube by application of a potential of -0.90 V vs. air electrode (RE) at 780 °C. Platinum counter and reference electrodes were coated on the outer side of YSZ tube. Electrical connection to the working electrode was achieved using a glassy carbon rod immersed within the liquid tin inside the YSZ tube.

The anodic current was monitored with time while p(H2) was increased step-wise from zero to 8, 15 and 26 kPa (Figure 2a) and reduced back from 26 kPa to zero (Figure 2b). The observed direct proportionality between steady currents and p(H2) was evident (for the range of flow rates studied) and served as an indicative effect that was considered in the modelling.

Experimental investigations were first performed to assess the effect of hydrogen partial pressure in terms of current generation and dynamics associated with changes in hydrogen concentration in the melt. These results were then used in support of an analytical modelling analysis. Determination of the w’ parameter, as well as solubility limits of hydrogen in liquid tin during the operation, are also considered. 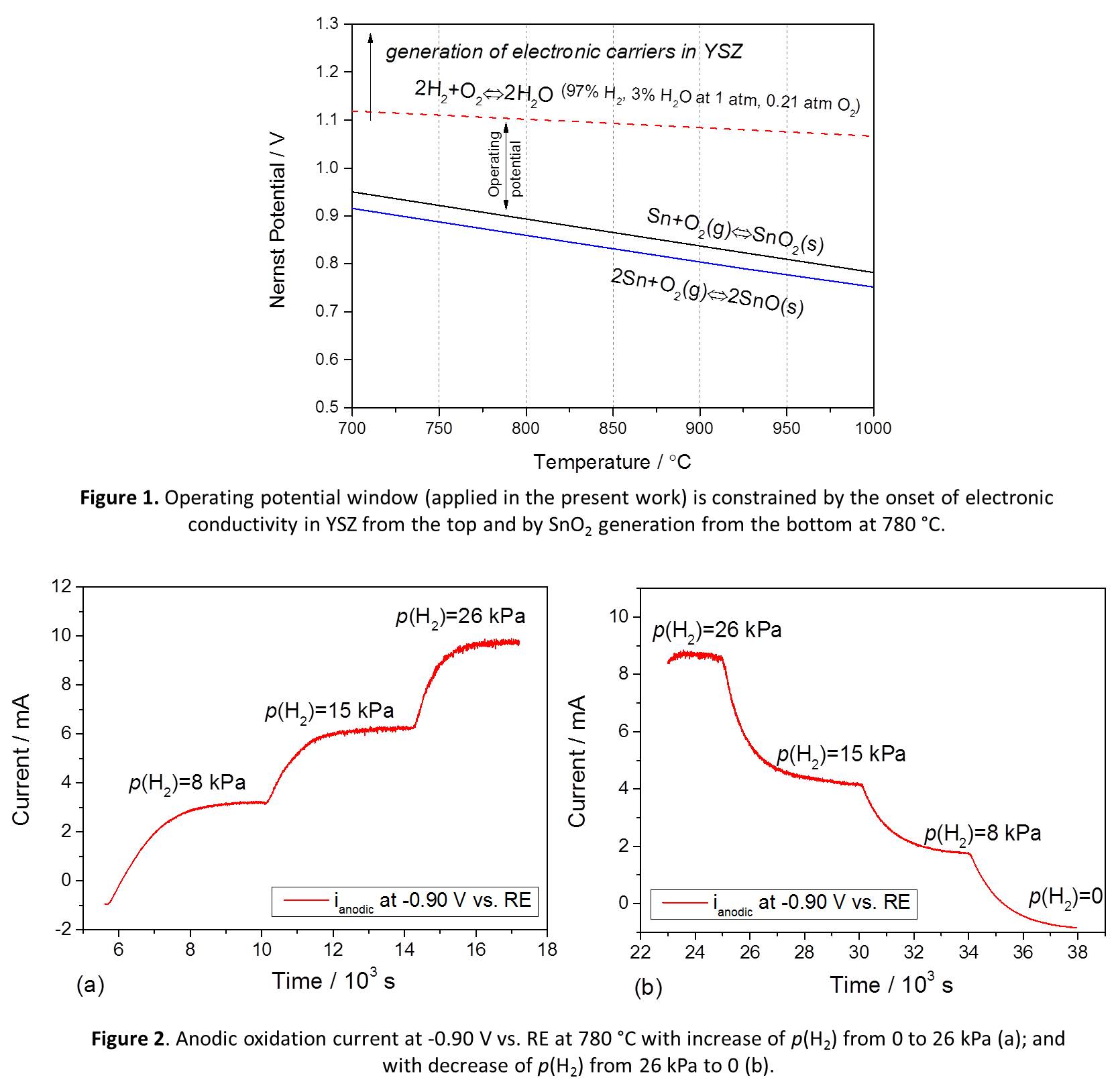