Boisdale (Scottish Exhibition and Conference Centre)
J. Nielsen (DTU Energy, Technical University of Denmark), B. R. Sudireddy, A. Hagen (Technical University of Denmark), and H. Persson (DTU Energy, Technical University of Denmark)
In recent years, there has been a growing interest in developing metal supported solid oxide fuel cells (MS-SOFCs). MS-SOFCs are interesting as they potentially offer some advantages compared to conventional electrode and electrolyte supported SOFCs, such as low materials cost, better thermal conductivity and ductility of the support. The two later aspects improve the shock resistance and lower internal gradients within the stacks. This enables fast start-up and provides higher tolerance towards operation under transient conditions that are particularly desirable for APU applications.

Today’s commercially available and relevant SOFC fuels such as natural gas and diesel etc.  contain trace amounts of sulfur. Thus, tolerance towards sulfur poisoning is desirable. Ceria and gadolinium doped ceria (GDC) have been reported in the literature to have a beneficial effect on the tolerance towards sulfur poisoning. The ceria can be incorporated as a Ni:GDC cermet anode, but also via infiltration of ceria and doped ceria into the conventional Ni:YSZ cermet anode. Both approaches have been reported to improve the tolerance towards sulfur poisoning [1-3]. In the present study we report the performance and sulfur tolerance of MS-SOFCs with two different microstructures of the support and the anode functional layer (AFL). The MS-SOFCs of the present study are based on ferritic stainless steel (FeCr) with an aimed operating temperature of 650ºC. This lower operating temperature compared to electrode and electrolyte supported SOFC (750ºC-850ºC) is expected to favor sulfur adsorption and hence increase the impact of sulfur poisoning. The AFL was infiltrated with Ni-GDC precursor solution and subsequent heat treated resulting in a nanostructured coating of the electrocatalyst. The two studied MS-SOFC single cells (active area 16 cm2) have initial area specific resistances (ASR) at 650ºC of 0.35 Ωcm2 and 0.7 Ωcm2 respectively. It was found that the porosity of the support and the AFL seems to have a pronounced effect on the resulting performance. The MS-SOFCs were subjected to technologically relevant H2S concentrations of 2, 5 and 10 ppm in hydrogen fuel, during galvanostatic operation at a current load of 0.25 Acm-2. The results are illustrated and compared with the conventional SOFC Ni:YSZ cermet anode in figure 1, where the relative increase in anode polarization resistance as a function of Ni sulfur coverage is shown. The comparison indicate the MS-SOFC anode of the present study to be more tolerant towards sulfur poisoning than the conventional Ni:YSZ cermet anode. 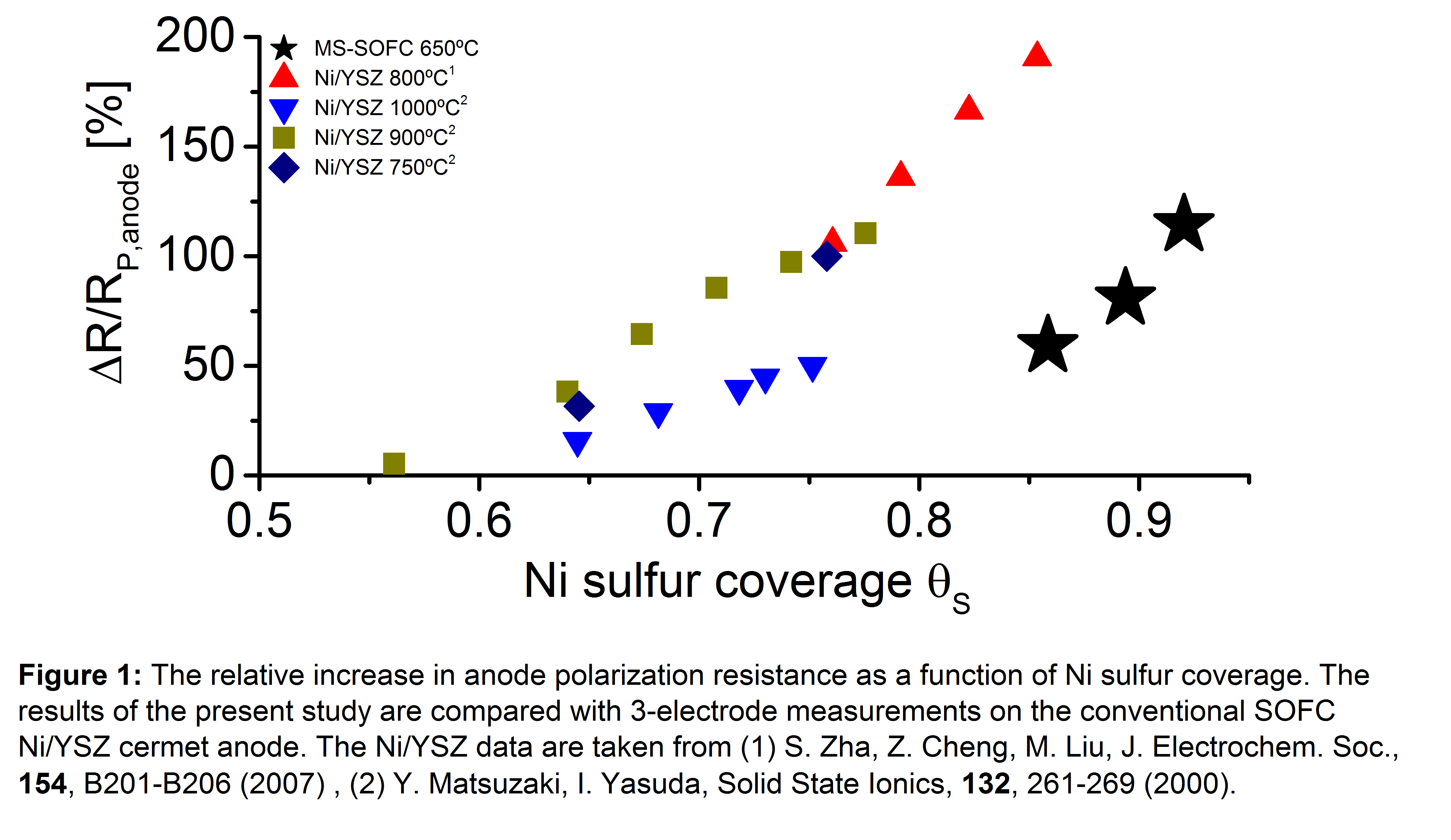