Boisdale (Scottish Exhibition and Conference Centre)
Y. Fujimaki, T. Nakamura (Tohoku University, Japan), K. D. Bagarinao, K. Yamaji (AIST, Japan), K. Yashiro, T. Kawada, F. Iguchi, H. Yugami, and K. Amezawa (Tohoku University, Japan)
In a conventional SOFC porous electrode consisting of mixed ionic and electronic conductor, the electrochemical reaction does not homogenously occur, and the reaction faradaic current decreases with the distance from the electrode/electrolyte interface. It is generally believed that the reaction distribution in the electrode is basically determined by the material properties, e.g. chemical diffusion coefficient D and surface reaction rate k, as well as the electrode microstructure, e.g. porosity, tortuosity, and particle size. However, so far, the contribution of D and k to the formation of the electrochemically active area was not quantitatively confirmed in an experimental manner. In this work, we experimentally evaluated the electrochemically active area in an La0.6Sr0.4CoO3-δ (LSC64) electrode by using 18O/16O isotopic exchange experiments and the following second ion mass spectroscopy (SIMS) analysis, and the contribution of D and k was discussed.

Conventional SOFC porous electrodes have very complicated microstructures. For quantitative evaluation of the electrochemically effective area while eliminating the influence of structural complexities of the electrode, a columnar-type electrode (Fig. 1 (a)) is useful. However, this columnar electrode is difficult to be fabricated in practice. Therefore, we proposed the patterned film electrode, which is schematically shown by Fig. 1 (b). In this electrode, an Al2O3 insulating layer is partially inserted between electrode and electrolyte, and oxide ions can pass only through the electrode/electrolyte interface where the insulating layer does not exist.

16O/18O isotopic exchange experiments were performed with the patterned thin film electrode. The electrode was heat-treated at 973 K under P(16O2) = 1 bar for 1 hour and thereafter under the same pressure of 18O2 for 5 minutes. The dashed curve in Fig. 2 shows the observed profile of the oxygen isotopic ratio as a function of the distance from the electrode/electrolyte interface. The remarkable decrease of 18O concentration was found near the interface. This is because 16O can diffuse from electrolyte to electrode while surface-exchanged 18O can diffuse from electrode to electrolyte through the interface.

Similar isotope exchange experiments were performed with the patterned thin film electrode under polarization. Cathodic bias of 220 mV were applied under P(O2) = 1 bar at 973K. The observed profile of the oxygen isotopic ratio was given by the solid curve in Fig. 2. The 18O concentration was gradually increased with approaching the electrode/electrolyte interface and drastically decreased in the vicinity of the interface. The increase of 18O was observed within about 20 μm from the interface. Such an increase of 18O near the interface is considered to be caused by electrochemical oxygen incorporation. This suggests that the electrochemically active area was approximately 20 μm from the electrode/electrolyte interface in the case of the LSC64 patterned thin film electrode under P(O2) = 1 bar at 973 K. In the presentation, the results obtained under various P(O2) and temperatures will be also presented, and the contribution of D and k to the formation of electrochemically active area will be discussed. 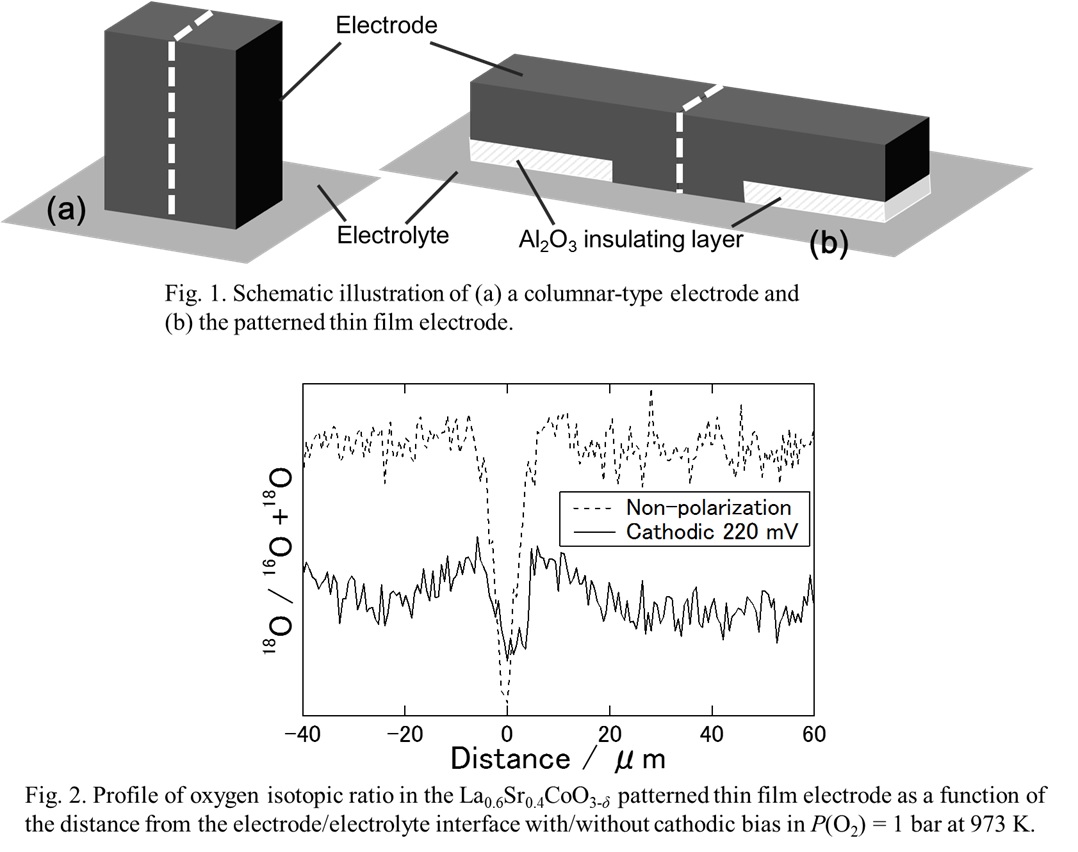