REBaCo2O5+δ (RE = Rare Earth) layered perovskite oxides are promising mixed ionic-electronic conductor cathodes for Intermediate Temperature SOFCs, thanks to their high electronic conductivity, high oxygen vacancy concentration, good ion transport capability and high oxygen surface exchange coefficients [1]. Their structure is characterized by the ordering of RE and Ba cations in a double perovskite structure (LnCoO3-δ–BaCoO3-δ), wherein Ln and Ba occupy alternate layers instead of being randomly distributed on the A site. Consequently, oxygen vacancies are located in the Ln-O layer. In this work, NdBa1-xCo2O5+δcathodes with different levels of Ba deficiency were prepared and characterized by application of different techniques. The kinetics of the Oxygen Reduction Reaction (ORR) were investigated by Electrochemical Impedance Spectroscopy (EIS) tests. The results were numerically modeled to derive the main kinetic dependence.

NdBa1-xCo2O5+δ samples (x = 0, 0.05 and 0.10, NBC0, NBC5, NBC10) were prepared via solid state mixing and firing method. X-Ray Diffraction (XRD) was applied to verify the phase purity. Lattice parameters were refined using the Pawley method. XRD analyses were also conducted on mechanical mixtures (50/50 wt%) of the samples with CGO (Ce0.9Gd0.1O2) to evaluate the occurrence of chemical interactions after firing to 1100°C. Thermogravimetric Analyses (TG-DTA, air, 25-850°C, 3°C/min) and Temperature Programmed Oxidation tests (TPO, 2% O2 in He flow, 20 Ncc/min, 25-850°C, 2°C/min) were performed to investigate the oxygen exchange activity. The oxidation state of Co and the O content in pure and Ba-deficient compounds were estimated by cerimetric redox titration. The electrical conductivity and the polarization resistance of the samples were measured as a function of temperature with a potentiostat/galvanostat equipped with a FRA. The electrical conductivity was measured via a four-electrode DC method on sintered bars between 25 and 850°C. EIS tests were performed using a symmetric cell configuration with CGO as the electrolyte. Pellets were fabricated via die-pressing and calcination (1400°C, 12 h, air). A slurry of the cathodic material was applied on each side of the pellet, dried at 110°C for 12 h in air, and calcined at 1100°C to reach adhesion. The EIS tests were performed in air and O2/N2 mixtures (O2= 100 – 5% v/v) between 550 and 750°C. Scanning Electron Microscopy allowed to access the morphologic characteristics of both powder samples and symmetric cells.

The XRD patterns of NBC0, NBC5 and NBC10 show that all the samples have an A-site ordered tetragonal crystal structure (space group P4/mmm). Trace of an impurity phase (NdCoO3) was detected in the NBC10 sample, indicating that the maximum Ba deficiency accepted is slightly lower than 10%. The Ba deficiency causes a shrinkage of the structure: the deficiency mainly affects the a lattice parameter, while the c parameter is much less affected. The cerimetric titrations show that the oxidation state of Co increases at decreasing Ba content, with a decrease of the total O content of the sample. For all the samples, the TG (Fig. 1A) and the TPO analyses show that the O content decreases at increasing temperature. As well, the Co oxidation state decreases, reaching an average value of 2.9 above 850°C. The transition from a semiconductor- to metal-type conductivity is observed for all samples in the electrical conductivity tests. The estimation of the ASR from EIS tests (Fig. 1B) revealed that the lowest apparent activation energy (1.30 eV) is achieved on the stoichiometric sample NBC0, and that the activation energy progressively increases at decreasing Ba content (1.58 eV for NBC5 and 1.73 eV for NBC10). The kinetic investigation was performed for each sample and the results were analyzed based on equivalent circuits (Fig. 1C). The main reaction steps of the ORR mechanism were identified (O2- ion transfer at high frequency, O2 adsorption at medium frequency), and their activation energy and O2reaction order were quantified. The kinetic analysis reveals that the NBC0 sample is the most active, showing the lowest activation energy for both the steps. The EIS results and that of the conductivity suggest that Ba-site deficiency generates negative defects in the crystalline structure, which are balanced either by the formation of further oxygen vacancies or by increased fraction of electron holes, thus influencing the oxygen and electronic conduction properties. Good stability was observed in the ageing tests (500 h, time on stream, 500-750°C).

The temperature range (500-700°C) required by IT-SOFCs is especially detrimental for the kinetics of the oxygen reduction reaction. Double-layered perovskites based on Nd and Ba cobaltite reveal very interesting cathodic electrocatalysts. 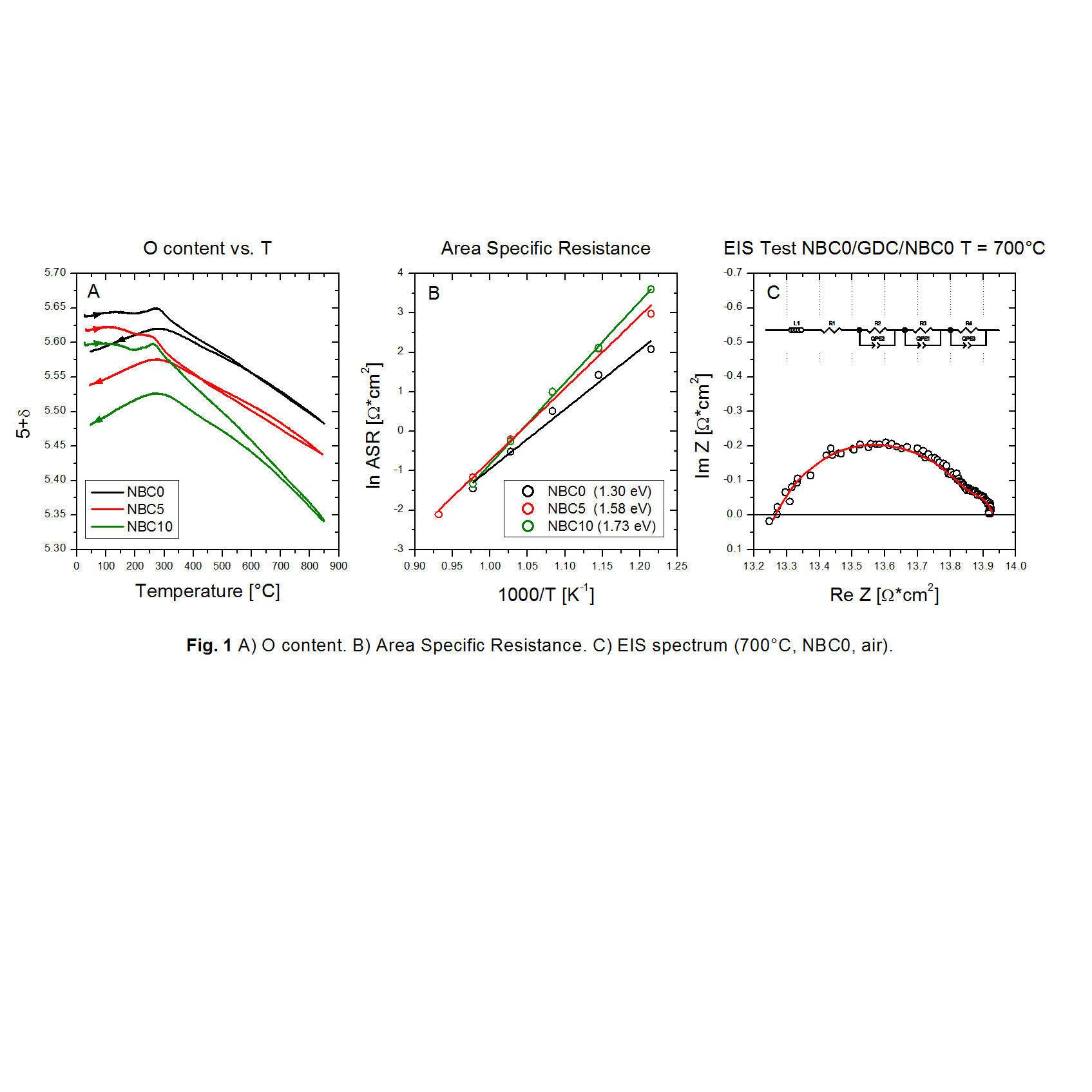