Carron (Scottish Exhibition and Conference Centre)
F. M. Wang (National Taiwan University of Science and Technology)
A novel in-operando observation to the formation of solid electrolyte interface (SEI) has been developed. This research demonstrates that the electrochemical-surface plasma resonance (EC-SPR) is able to evaluate the step-by-step kinetic molecule interaction between the electrolyte and the surface of electrode material. In this study, a commercial electrolyte (1M LiPF6 into EC/EMC) has been used to define the SEI formation on gold (Au) electrode. Fig. 1a shows the linear sweep voltammogram (LSV) spectrum was operated at the scanning rate of 0.83 mV/s and in the operation window of 0~(-3) V. This result confirms that the SEI was formed at -1.24V and the lithium ion was going to reduce at -3V, indicating there are at least two passivation processes on this system. Fig. 1b shows a decreasing behavior of intensity difference of SPR, indicating the substances gradually covered for the Au electrode’s surface. In accordance with Fig. 1b, this spectrum can be simply separated by two slopes. The two slopes cross a point at 21.5 min, representing the reduction time of SEI. Fig. 1c also illustrate a decreasing behavior of the angle difference of incidence, indicating a continually dissociation process was taking place. However, three different slopes were discovered and strongly correlated to the result in Fig. 1b. The first slope in Figs. 1b and 1c indicate the lithium ions dissociate from ethylene carbonate (EC) molecules and moves to the Au surface when the electrochemical driving force was triggered. The second slope in Figs. 1b and 1c implies an association process (a stable intensity in Fig. 1b and a lower slope in Fig. 1c), indicating that the lithium ion joins the SEI formation at typical reduction potential on Au surface. However, Fig. 1c reveals that the Au electrode is not able to correlate the SEI formation due to the slope changes into higher value (third slope), which represents the intrinsic property of Au is different to graphite [1], implying the SEI is further dissociated from Au surface. The SEI formation on typical electrode materials such as graphite, graphene, and silicone are under researching. The EC-SPR is a powerful instrument for studying the SEI in order to character an in-operando interaction mechanism between the electrolyte molecules and electrode materials.

Fig. 1 In-operando EC-SPR observations of (a) the LSV, the sensograms of (b) the intensity difference of SPR, and (c) the angle difference of incidence. 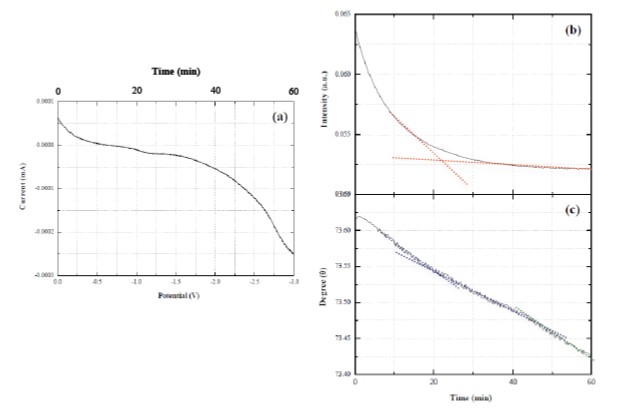