Hall 2 (Scottish Exhibition and Conference Centre)
M. R. Somalu, A. Muchtar (National University of Malaysia), and N. P. Brandon (Imperial College London)
Fabrication of solid oxide fuel cell (SOFC) components via a simple and economical technique is critical to lower the overall manufacturing cost of SOFCs. In this regard, screen-printing is widely used to fabricate SOFC components having thickness in the range of 10 to 100 μm. Fabrication of SOFC components by screen-printing using an optimized ink is very significant for the production of high quality films with improved performance. To realize this, the rheological properties of the ink, including static and dynamic properties, need to be understood deeply for the application of the ink at a specific printer setting. Understanding the relationship between the composition and rheology of the inks may enhance the properties and performance of the resultant screen-printed films. The effect of ink composition consisting of a solid, a binder, a solvent and a dispersant on the rheological properties and performance of resultant films must be understood for the fabrication of an optimized ink. These effects can be optimized by measuring the ink rheological parameters such as viscosity, yield stress, thixotropy and viscoelasticity. Furthermore, these parameters must be related to the particle network strength in the fabricated inks and mechanical, electrical and electrochemical performance of the resultant films. In this study, the rheological properties of NiO/ScSZ anode inks are studied and correlated to the particle network strength, screen-printability, microstructure, mechanical hardness, electrical performance and electrochemical performance. The initial study showed that inks having particle network strength and complex modulus in the range of 100-200 Pa and 500-4000 Pa, respectively, have been suggested suitable for screen-printing application. In addition, these inks showed suitable viscosity and thixotropy for screen-printing application. These range was exhibited by inks having binder and solids loading in the range of 1-3 wt% and 25-28 vol%, respectively (wt% refer to wt% of solids loading and vol% refers to vol% of final ink composition). The mechanical hardness, conductivity and electrochemical performance of screen-printed films produced using these inks also showed improved properties with increasing particle network strength in the fabricated inks. These properties were further confirmed by investigating the SEM images of sintered films. 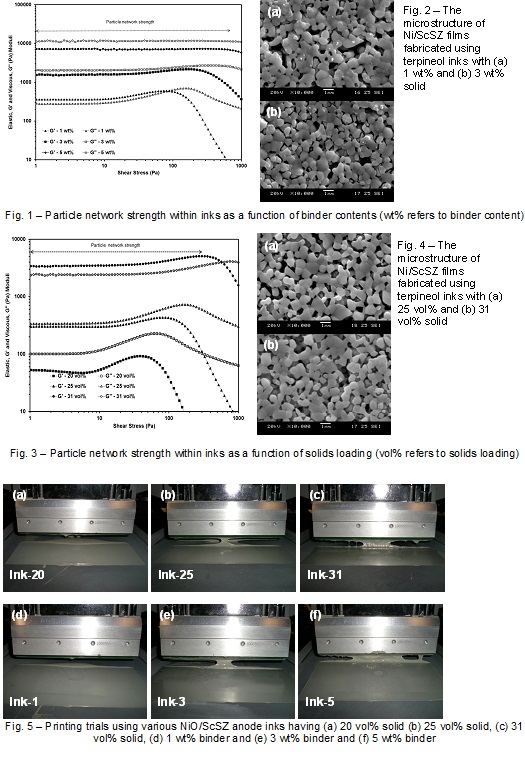