Recently, a new anode incorporating a BaCe0.8Y0.2O3-δ (BCY) proton conductor was proposed by the authors to increase a power density of SOFCs, and it was found that the anode overpotential was reduced by incorporating BCY particles to the conventional Ni/GDC cermet anode1. Moreover, it was found that BCY particles might contribute to supply the adsorbed hydrogen to the triple phase boundary (TPB) in anodic reaction2. Based on these results, a modified reaction model around the TPB was proposed to explain the mechanism of overpotential reduction in the anode incorporating the proton conductor, and analytical expression of current density with oxygen activity and anode overpotential with current density were obtained3.

In this study, the analytical expression of interfacial conductivity of anode (the inverse of the anode polarization resistance) was obtained based on the reaction model3. In addition, the analytical results of overpotential or interfacial conductivity of conventional Ni/YSZ anode were compared with those obtained from experiments4, and the validity of the reaction model was discussed.

The details of the reaction model were shown in our previous work3. In this model, some finite areas, which contribute to species adsorption, are assumed around TPB, and hydrogen and oxygen are assumed to be adsorbed mainly on the surface areas of Ni and oxide ion conductor, respectively (We define this idea as “species territory adsorption model”). In addition, it is also assumed that the reaction rate in the anode is controlled by the surface reaction between Had and Oad, while all other reaction takes place under the condition of chemical equilibrium. Based on the model, under the condition that the pure oxygen (PO2=1atm) is used in the cathode side, a simple expression for current density i and anode overpotential ηa could be obtained explicitly as a function of an oxygen activity at the anode aO and a current density i, respectively. Here, aO is expressed as aO=exp(2FE/RT) (E is anode potential).

Using the analytical expression of i as a function of aO, the interfacial conductivity (σE) of anode, which is described as the inverse of the anode polarization resistance, is derived as follows.

Here, θV(1) and θV(2) means the coverage of vacant adsorption site on the surface areas of Ni and oxide ion conductor, respectively. These are described as follows.

Here, PH2 and PH2O are partial pressure of hydrogen and water vapor at the anode side, respectively. Ki, K'i (i = species) and kaj, kcj (a, c = anodic or cathodic reaction for 2Had+Oad → H2Oad+2Vad) show the equilibrium constant and the rate constant, respectively. A unique combination of fitting parameters, such as equilibrium constants and reaction rate constants were obtained from a comparison between analytical and experimental results4 for the case of Ni/YSZ anode.

Analytical results and discussions with experiments

Based on the reaction model of SOFC anode proposed by the authors, the overpotential and interfacial conductivity of conventional Ni/YSZ anode was discussed. The experimental results of humidity dependence of anode overpotential or interfacial conductivity is in good agreement with those obtained by the analytical results based on the proposed model. 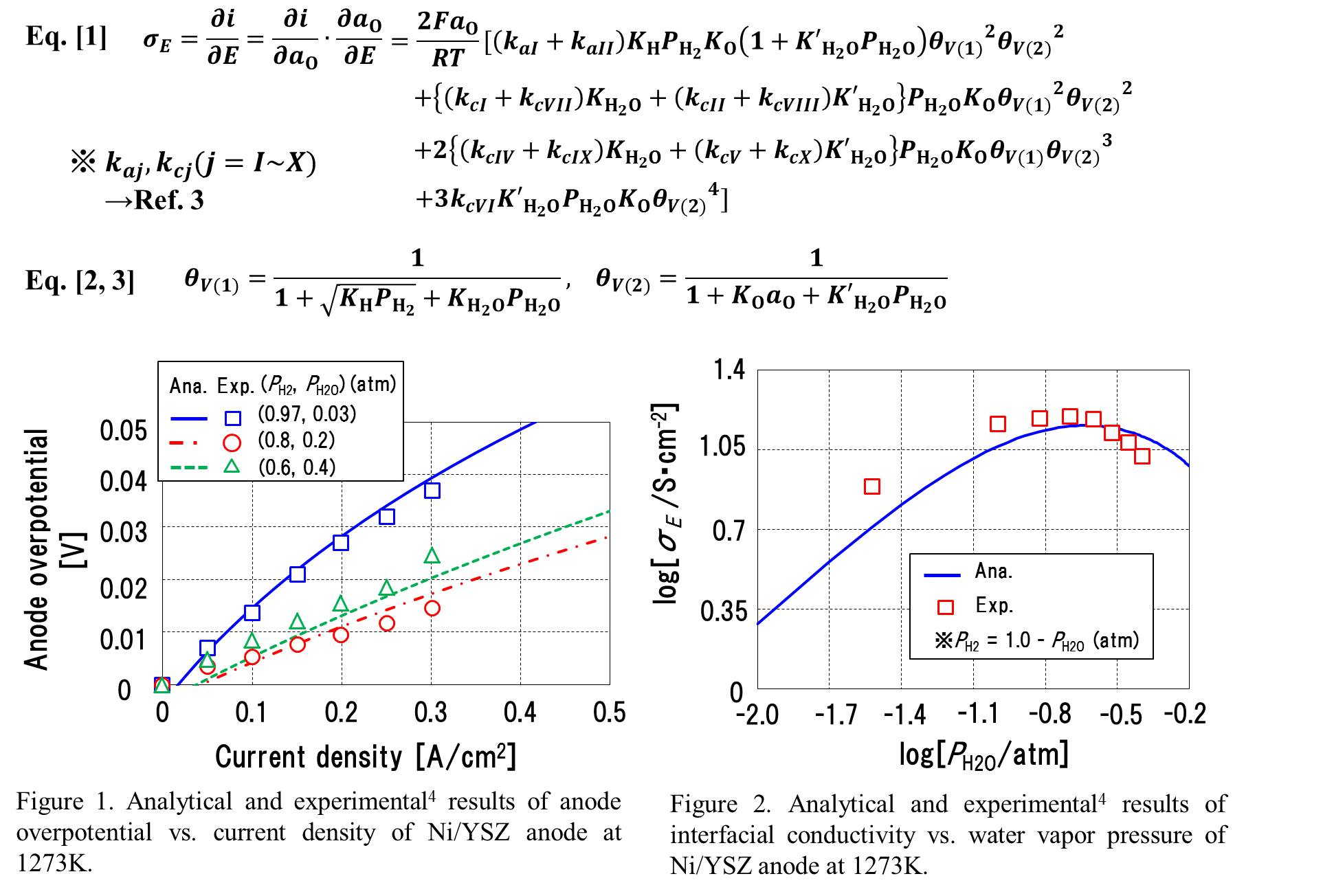