For the investigation of electrochemical reactions in the atomistic level, first principles electronic structure method is a powerful theoretical tool, but the calculation procedures are not so simple when the target system includes complicated interface TPBs. The TPB atomistic model must include the following ingredients: 1) metal region (i.e., slab), 2) solid electrolyte region (slab), 3) the metal-solid electrolyte interface, and 4) the interface exposed to vacuum [1,2]. When we construct a TPB model holding these conditions, the number of atoms included in the computational cell becomes large, and reaction analysis based on the large models is sometimes found to be inappropriate depending on the computational costs. Therefore, theoretical calculations for reaction analysis on TPB were sometimes carried out using small metal-cluster deposited on solid electrolyte slab. However, the electronic structures of metal-slab and metal-cluster are very different because of the finite size effect of the metal cluster model. At the first part of this study, we will present how the metal cluster models on solid electrolyte inappropriately affect computational results at TPB, and how an acceptable TPB model should be constructed based on metal-slab layers (see an example for TPB structure in Figure). 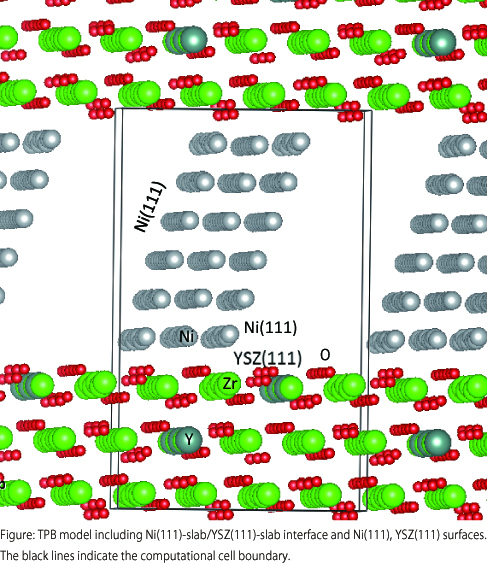