Lomond Auditorium (Scottish Exhibition and Conference Centre)
R. Küngas, T. B. Hertz, and T. Heiredal-Clausen (Haldor Topsře A/S)
Recently, the use of infiltration as a method for SOFC electrode preparation has gathered significant scientific interest (1-6). The results thus far have been mostly obtained on button cells with electrode active areas on the order of 1 cm2 or less. Here, we report the physical characterization and stack testing of 12 x 12 cm2 planar cells with cathodes prepared by infiltration of a perovskite precursor solution into a stabilized zirconia backbone.

As the first step in the development of the new cell design, a stabilized zirconia backbone layer with high surface area and good mechanical compatibility with the rest of the cell was developed. After an optimized sintering procedure was introduced, batches of about 90 cells could reproducibly be manufactured with high yields. The optimized blank cells were infiltrated with a precursor solution of (La0.8Sr0.2)0.95FeO3 and the resulting cells were characterized thoroughly using XRD, van der Pauw in-plane conductivity, BET specific surface area, and electrochemical single-cell measurements. As the in-plane conductivity, the BET surface area as well as the pore-size distribution of the cathode are thought to play a key role in determining the long-term performance and stability of infiltrated cells in a stack, changes in these properties were mapped out as a function of the cathode sintering temperature.

Electrochemical testing on both cell and stack level confirmed the enhanced performance of cells with cathodes prepared by infiltration. Results on degradation testing will be reported separately. 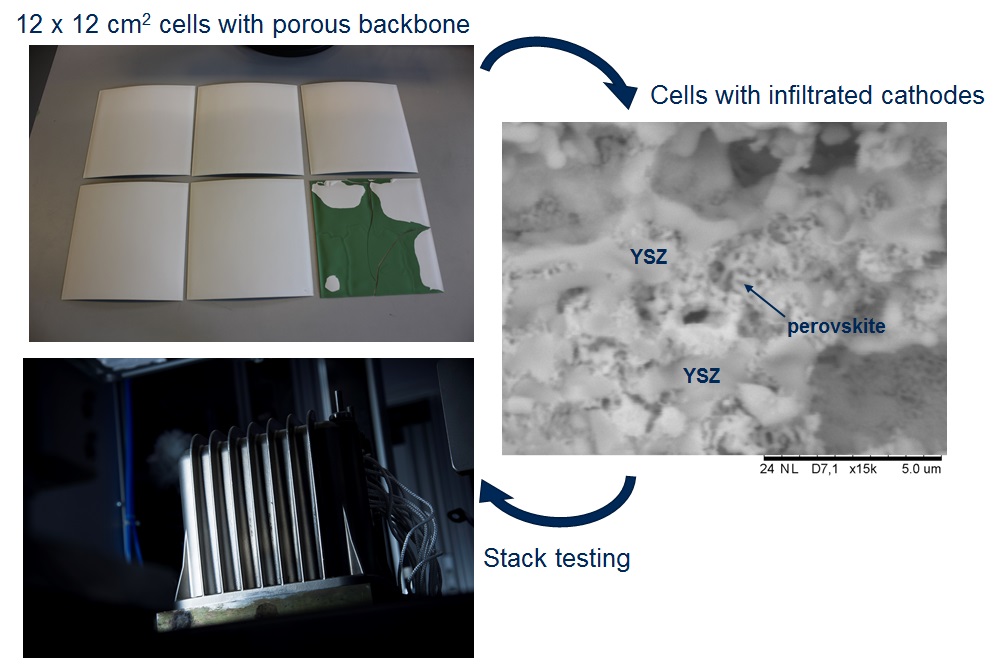