Hall 2 (Scottish Exhibition and Conference Centre)
K. Lee (Korea Advanced Institute of Science and Technology), S. Jin (Hanbat National University), J. Kang, S. Lee, and J. Bae (Korea Advanced Institute of Science and Technology)
One of disadvantages of SOFCs is their mechanical strength. Ceramic supported SOFCs are weak and they can be failed by mechanical load. It can be supplemented by applying metal support. The sealing issue is another disadvantage of ceramic support SOFCs, but it can be solved easily using metal support by welding its boundary. Therefore, it minimizes sealants usage in SOFC stack fabrication, and this allows SOFCs to be applied to various applications including transportation facilities such as vessels and automobiles.

The joining process has been used to fabricate metal supported SOFCs. In the conventional process a metal supported SOFC is fabricated under reduction atmosphere to avoid the oxidation of metal support. When the metal support is exposed to SOFC operating temperatures, 600-800°C, the metal substrate is oxidized, and then Cr oxide layer is formed on its surface. Although Cr oxide layer can protect substrate’s surface from high temperature, it decreases SOFC stack performance due to low electrical conductivity. Moreover, Cr oxide layer reacts with oxygen at high temperature and forms Cr gas species which can lead cathode poisoning. As a result, SOFC stack performance is decreased significantly. Therefore, the sintering process should be performed at high temperature under reduced atmosphere to prevent Cr poisoning. However, lots of problems can be caused by the conventional joining process as the following:

The performance of metal supported SOFCs is worse than that of ceramic supported SOFCs. The joining process has a critical limitation fundamentally caused by oxidation problem. Therefore, an alternative fabrication process is required in order to overcome facing challenges.

The structure of metal supported cell (Fig. 1(a)) using the conventional joining process has some limitations due to the oxidation problem. Many researchers have manufactured metal supported cells using the conventional method, and none of them can avoid serious degradation of stack performance because of problems mentioned earlier such as low activity of cathode, delamination of anode and sealing issue.

In order to accomplish successful development of this technology, forming dense or porous films is indispensable. Generally, high temperature sintering process has to be performed for densification of SOFC electrolyte. Therefore, the research on developing a sintering process which can make electrolyte dense at relatively low temperature such as 1000°C should be performed at the beginning. However, this work is too difficult for accomplishment, because the substrate’s surface for coating electrolyte has high porosity and is not smooth. Furthermore, conventional methods to dense layer at low temperature are very expensive and have to take coating for long period.  Therefore, it needs new approach to solve the problem mentioned above. Firstly, solution which has high viscosity is coated on substrate surface to block the porous surface. Then, another solution which has low viscosity is coated within electrolyte layer to densify. Fig. 2 shows the results of new method which can make dense layer at relatively low temperature.

As the next step, a metal supported SOFC with a newly designed structure is manufactured by interconnect-coating-based method using a new coating technology for electrolyte. The performance and characteristics of the metal supported SOFC were measured by solartron 1260 which is an electrochemical measurement device. 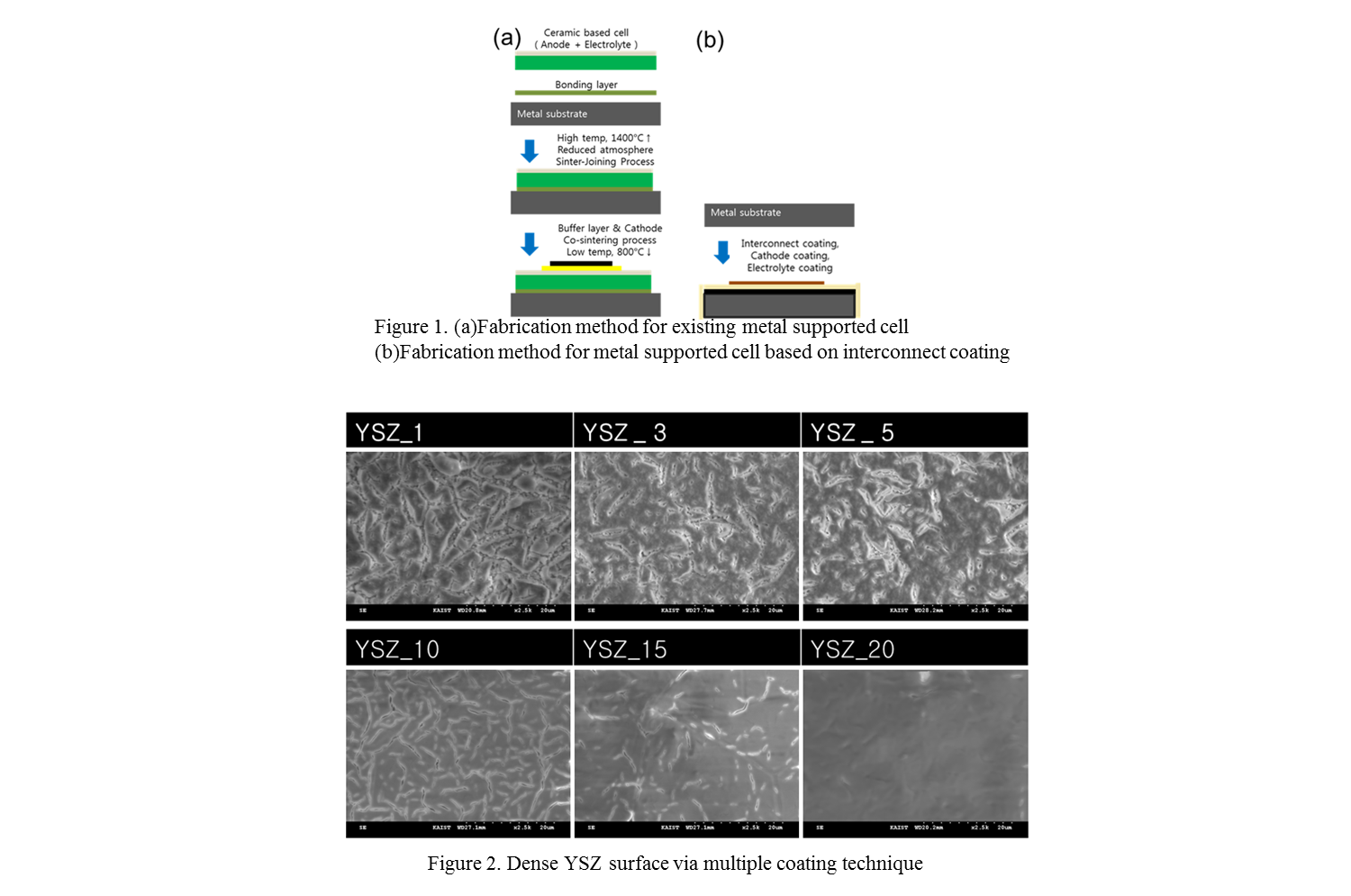