Dochart (Scottish Exhibition and Conference Centre)
M. Inaba, A. Shirai, K. Nakamura, K. Mizoue, K. Okuno, H. Daimon, T. Doi (Doshisha University), N. Aoki, and H. Inoue (Ishifuku Metal Industry)
It is now widely recognized that the amount of expensive Pt catalyst in PEFCs should be decreased for cost reduction.  Pd core/Pt shell structured catalyst supported on carbon (Pt/Pd/C) is a strong candidate for improving the utilization of Pt.  It has been also reported that the activity oxygen reduction reaction (ORR) activity of the Pt shell is enhanced by the strain effect of the Pd core [1,2].  Recently, we developed a new synthetic method for carbon supported Pd core/PtMLshell structured catalyst (Pt/Pd/C) using a modified Cu-UPD process [3] and found that ORR activity of the Pt/Pd/C catalyst was drastically enhanced after a potential cycling accelerated durability test (ADT) [4].  In this study, we investigated microstructural changes of the Pt/Pd/C catalyst after potential cycling and discussed the mechanism for the enhanced ORR activity.  In addition, we optimized the protocol for potential cycling to further enhance the ORR activity.

The ORR activity of the Pt/Pd/C catalyst was enhanced after ADT, showing by 2-fold higher ORR mass activity (512 A/g-Pt) than that of a commercially available Pt/C catalyst (2.8 nm, 46 wt.%, TEC10E50E, TKK).  Morphological changes of the Pt/Pd/C catalyst after ADT is shown in Figure 1.  The average size of the catalyst decreased from 5.6 to 4.9 nm and the catalyst particles changed into spherical particles.  TEM-EDX analysis revealed that the Pd core dissolved out by 73 % and the Pt shell was thickened (to approximately 2.3 ML) after ADT.

The microstructural change of the Pt/Pd/C catalyst after ADT is schematically illustrated in Figure 2. The Pd core dissolved out through defects on the Pt shell during ADT.  As a result, the Pt atoms at the shell were rearranged to give a defect-free surface to the Pt shell, by which the number of lower coordinated Pt atoms decreased.  EXAFS analysis revealed that the Pt-Pt bond length decreased after ADT.  It was concluded that the enhanced ORR activity after ADT was caused by a moderately induced compressive strain at the Pt shell, in addition to a decreased number of the lower coordinated Pt atoms.

Though the ADT protocol gave an enhanced mass activity (~ x2) to the Pt/Pd/C catalyst, there remains one problem that the electrochemical surface area (ECSA) decreased from 140 initially to 40-50 m2/g-Pt after ADT.  Hence we optimized the potential cycling protocol to minimize the decrease in ECSA during ADT.  The optimized protocol (0.4 V (300 s)/1.0 V (300 s) for 60 cycles) gave a high ECSA (> 80 m2/g) and a very high ORR mass activity (1002 A/g-Pt, x4 of Pt/C) after potential cycling.

This study was supported by NEDO, Japan. 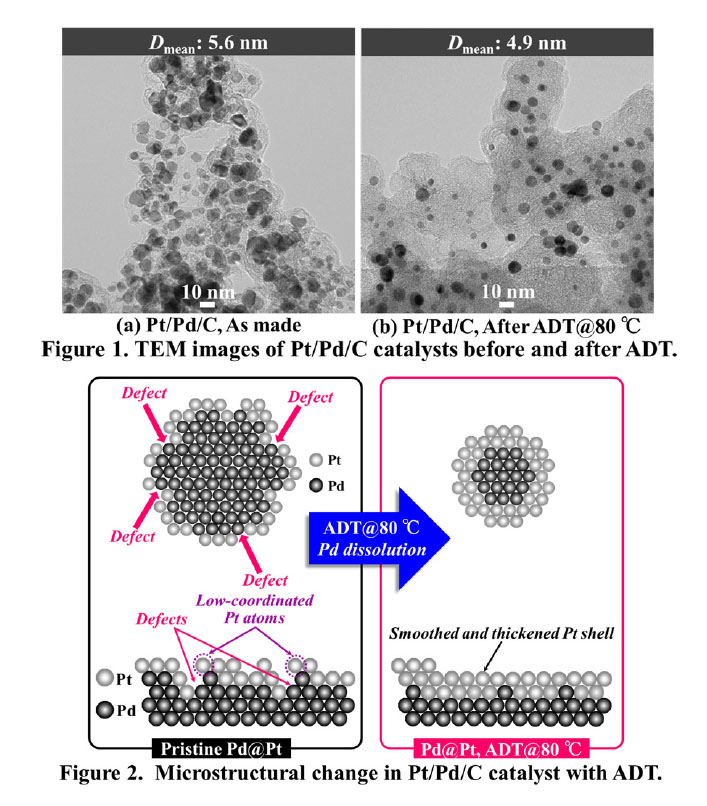