Steam electrolysis and co-electrolysis were investigated on circular Ni-YSZ supported cells produced by SOLIDpower (“ASC-700” type cells). The thin film electrolyte is constituted by YSZ and the oxygen electrode by LSCF-GDC. The active area corresponds to 12.56 cm2 (2 cm of radius).

The cells were fed with different H2O/CO2 mixtures, while keeping 10% H2 of the inlet molar flow in order to avoid re-oxidation of the Ni-YSZ support.

A sensitivity analysis was performed looking in particular at the effects of inlet gas composition, gas flows and temperature on the performances. I-V characterization and EIS measurements at different current densities were carried out for each sequence.

EIS analysis exhibits that ohmic and polarization resistances decrease with current densities lower than 0.4 A/cm2 and then rise with higher values. As expected, the increase of temperature has a positive impact on the performances, while the change of air and fuel flow slightly affects them.

In co-electrolysis mode the CO2 and H2O content was varied, keeping constant the total molar flow and the hydrogen fraction as explained before. As shown in the enclosed image, the area specific resistance (ASR) increases with the CO2 concentration in the mixture and gas transport limitation occurs at lower current densities.

Also in this case a sensitivity analysis was conducted changing the temperature (from 700°C to 800°C) and the resulting EIS plots demonstrate different ongoing processes favored at high current densities. In particular, the reverse water-gas-shift reaction plays an important role on the overall balance of the gas species, and it directly depends on temperature and inlet fuel composition. 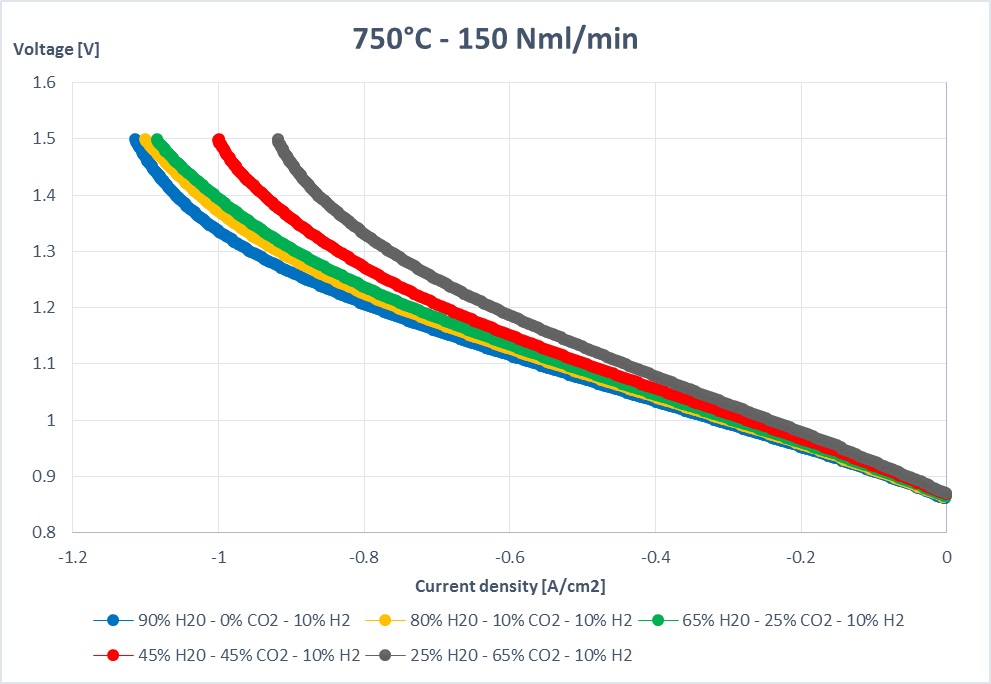