Hall 2 (Scottish Exhibition and Conference Centre)
K. Rashid (Korea Institute of Energy research (KIER), University of Science and Technology (UST), South Korea) and S. K. Dong (Korea Institute of Energy Research (KIER), University of Science and Technology (UST), South Korea)
Three dimensional numerical analysis of 1 kW flat tubular solid oxide fuel cell (FT-SOFC) stack that embedded in RPG is conducted. In this present analysis, steady state heat and mass transfer, species concentration and electrochemical reactions along with their losses are analyzed for FT-SOFC stack using two types of fuels; humidified hydrogen and reformed natural gas. However, the final objective of this numerical study is to design a complete 1 kW fuel cell stack system, which will be comprised of FT-SOFC stack, heat exchangers, after burner and integrated reformer. It is interesting to note that fuel cell operate best when they are fed with pure hydrogen which is quite clear from the result mentioned below. The reason is that inert gases are built up at higher current density causing concentration polarization in case of reformed gas. But the problem with pure hydrogen is its storage. An important feature of solid oxide fuel cell is its fuel flexibility. To take advantage, reformed natural gas is employed as alternative fuel as it contains more than 70 % hydrogen & more than 10% CO which act as a fuel. In the numerical computation process, governing equations for continuity, momentum, mass and energy conservation are solved simultaneously. The distribution of the reaction fields in Anode-supported FT-SOFC are found similar to those in the planar SOFC. However, the concentration and activation polarizations in FT-SOFC can be reduced by additional reactant diffusion through the porous ribs of the fuel channel. The present 1kW class stack consists of 80 anodes supported flat tubular (FT) SOFC’s, arranged parallel in a group of 40 cells each. The FT cells are positioned in vertical direction and placed in a preheated air enclosure whereas as fuel gas is supplied through the bottom manifold. To effectively conduct a three-dimensional (3-D) computational analysis of the flat-tubular stack, a commercial ANSYS Fluent 13.0 code is used. The User defined function (UDF an in house code) is also utilized for the simulation of electrochemical reactions, losses in cell voltage due to activation, ohmic and concentration. The changes on the voltage and power of the SOFC stack, current density distribution, temperature distribution, and species concentrations in relation to varying amounts of reaction gas flow are analyzed. To calculate activation loss during electrochemical reactions in cells, the different experimental formulas of exchange current density presented by Achenbach et al., Costamagna et al., Campanari et al. and Aguiar et al. were used. The formula of Achenbach indicates that only partial pressure of H2, an anode reactant, influences the determination of activation loss. By contrast, the formula of Costamagna et al. shows that both reactant H2 and product H2O affect the determination of activation loss. Although the reaction orders of the reactants and products observed by the two authors are different. Both Achenbach and Costamagna show a reaction order close to stoichiometry of electrochemical reaction in the anode. In this selected part of project, numerical study of FT-SOFC stack is done with both pure hydrogen and reformed natural gas. The I-V-P curves of the experimental and calculation results conducted on the basis of the different formulas were compared to identify a most suitable model for the SOFC stack in this current work. The electrical powers of stack system obtained from experiment using pure hydrogen and reformed natural gas are 1203 W, 1123 W respectively.  Whereas, electrical powers of stack system obtained from numerical simulation are 1220 W, 1168 W respectively. The error between the calculated and experimental I-V-P curves of SOFC stack is around 4 %. The analysis is envisioned to facilitate advancements in design for Flat Tubular SOFC stacks as well as system operation for practical applications. 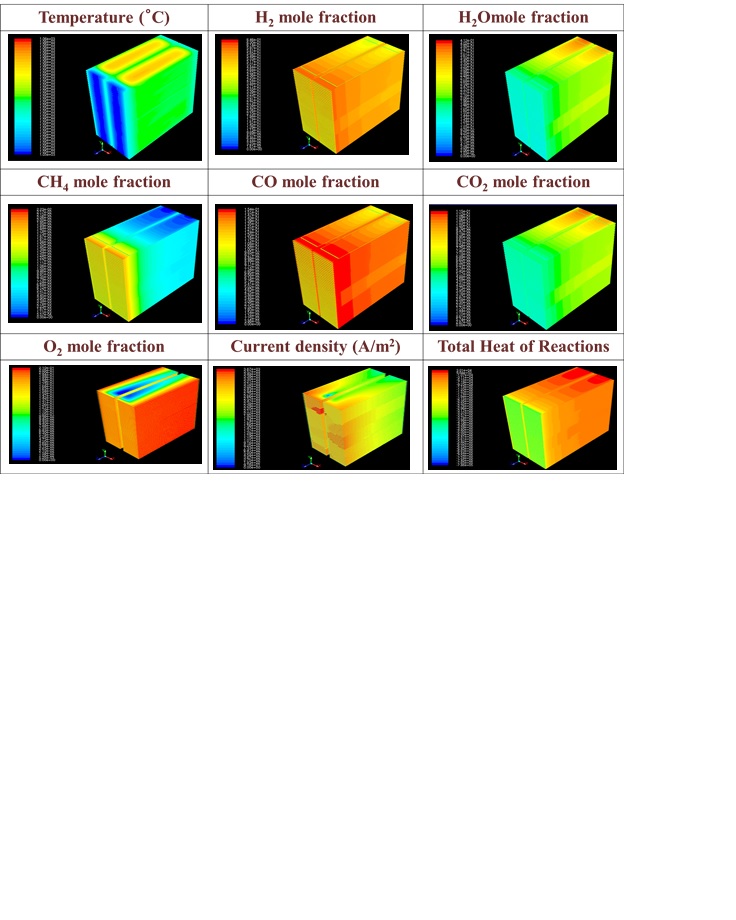