Alsh (Scottish Exhibition and Conference Centre)
V. M. Janardhanan (IIT Hyderabad)
Biogas is an ideal renewable fuel for distributed power generation using solid-oxide fuel cells (SOFC). However, the composition of biogas strongly depends on the biomass source and the digester conditions. The CH4 to CO2ratio typically varies between 1.4 and 1.7. Although there are handful of experimental studies available in the literature for direct biogas reforming in SOFCs, the modeling studies are really scarce. The objective of the present work is to develop a mathematical framework to model the operation of direct biogas SOFC under real-time conditions. The experimental report by Shiratori et al [1]., serves as the basis for validation of the results presented here.

Transport properties are calculated using kinetic theory of gases. The time accurate governing equations are solved using the method of lines and the whole code is implemented in C++.

We assume H2 to be the only electrochemically active species. This means that biogas that is fed into the cell is first reformed to produce CO and H2 and the H2 thus produced participates in the electrochemical reactions at the three phase interfaces, which are distributed throughout the thickness of the anode. However, the concentration of H2depends on the amount of CH4 converted, which is determined by the active catalytic area available. In the simulation results presented here, the active area is adjusted to reproduce the experimentally measured open circuit voltage (OCV) reported by Shiratori et al. For the calculation of reaction rates, the kinetic scheme reported by Appari et al., [2] for steam reforming of biogas is used.

The simulations are performed for two different compositions as reported in the experimental work of Shiratori et al., (CH4:CO2:O2 :N2=30:20:0:50 and CH4:CO2:O2 :N2=30:20:10:40) .The model predicted OCV is in very good agreement with experimental measurement for fuel without O2 , however, the model under-predicts the OVC by 4.6% with 10% O2  in the biogas. Since the kinetic model is not validated for tri reforming conditions, this deviation is not surprising. Nevertheless, the model is able to predict the decrease in OCV on introducing O2as observed in the experiments.

The exchange current density parameters for the anode and cathode are fitted in such as way that the model predicts 0.83 V at 200 mA/cm2. Once the active area and exchange current density parameters are determined, they are kept unchanged throughout the simulations. Very good agreement is observed between the model predicted and experimentally observed fluctuations in cell voltage while operating on real biogas compositions. In simulating these experiments, CH4 to CO2 ratio is made to vary randomly between 1.4 and 1.7, however, constrained to the condition that CH4 and CO2 makes up 50% of the gas at the inlet (the remaining is N2).

It has been reported in the literature that a fuel composed of CH4 and CO2, the maximum power output is obtained for CH4 to CO2 ratio of 1.0 [3]. In order to see if the model predicts the same behavior, based on the assumptions used this study; we simulated the dc-polarization data for the cell operating for three different fuel compositions. CH4 to CO2 ratio of 30:20 gave highest current for any given voltage. However, this is contrary to the experimental findings. The deviation of model predictions using a detailed kinetic scheme from experimental data was surprising.  In the case of a 1D button cell simulation, it is highly possible that the dry reforming reactions do not reach equilibrium compositions. However, single channel simulations can be driven to equilibrium conditions. However, in single channel simulations, there is gradual steam reforming along the channel length due to the production of H2O.  Extensive equilibrium calculations are performed map H2 concentration for various CH4:CO2:H2O concentrations. The predictions were analyzed in the form of ternary diagrams. The analysis of equilibrium calculations confirms the accuracy of numerical predictions. The deviations of the experiments from model predictions require further investigations.  Finally the variation of electrochemically active thickness of the electrodes along channels during operation on biogas is also investigated. 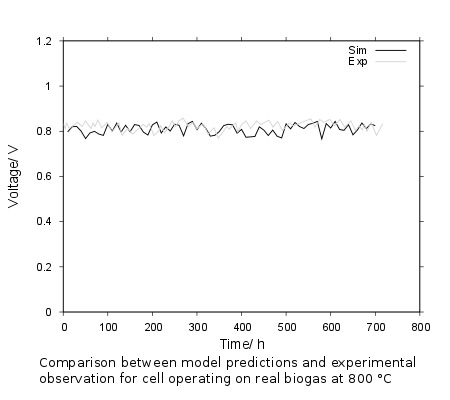