Generally, there are two components in an alcohol oxidizing fuel cell catalyst: an active metallic nanoparticle (commonly platinum or its alloy) and a carbon support, which is used to disperse and minimize the agglomeration of the nanoparticles. The stabilizing effect is further increased with doping of carbon with heteroatoms (e.g. nitrogen, boron, sulphur), which creates local charges to anchor nanoparticles on the support due to the different electronegativity of the atoms [1].

In this study, the use of PtRu supported on nitrogen modified few-walled carbon nanotubes (FWNT) [2] is studied for the electro-oxidation of ethanol in alkaline electrolyte at rotating disc electrode in temperature range relevant to direct ethanol fuel cells (0-60°C) and also in actual fuel cell conditions. The catalysts with 30% PtRu(1:1) loading have been prepared with following supports: FWNT, nitrogen-doped FWNT (N-FWNT) and aniline-covered FWNT (A-FWNT). The catalyst layer structure of the different catalysts is studied with scanning electron microscopy.

Electrochemical characterization shows that PtRu/A-FWNT has significantly lower electrochemically active surface area based on CO stripping than PtRu/FWNT and PtRu/N-FWNT indicating that covering the FWNT support reduces its surface area. However, nitrogen modification reduces the CO oxidation overpotential by approximately 20 mV. In Fig. 1, ethanol electro-oxidation currents are presented at 0.5 V vs RHE at 0 and 2000 s. It can be seen that PtRu/A-FWNT is very active but suffers from high poisoning rate, while PtRu/N-FWNT is not as active but has high tolerance from catalyst poisoning. The activity of the nitrogen-modified catalysts increase relatively compared to PtRu/FWNT when the temperature is raised from 0 to 60°C.

Fuel cell electrode polarization tests in actual alkaline fuel cell with Fumatech FAA3 membrane indicate that PtRu/N-FWNT does not perform very well at low temperature (30°C). However, as temperature is raised to 50°C, it shows the best performance followed by PtRu/A-FWNT and then by PtRu/FWNT. Furthermore, when constant current test for 40 h were performed, the PtRu/N-FWNT was most stable, while voltages with PtRu/A-FWNT and PtRu/FWNT quickly decreased to zero. Studying the electrode structure with SEM showed very dense layer structure for PtRu/A-FWNT and PtRu/FWNT contrasting very porous structure formed with PtRu/N-FWNT. This indicates that in addition to enhanced reaction kinetics also better mass transfer in the catalyst layer can be achieved with N-FWNT support. Larger pores facilitate the transport of ethanol to active PtRu nanoparticles and the transport of poisoning reaction products away from the electrode. Similar porous structure was seen in our previous study with N-FWNT catalyst for oxygen reduction reaction [3]. 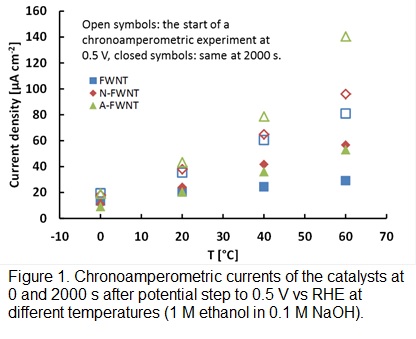