570
Intercalation As a Two-Step Process: Modeling of Adsorption at Electrochemical Interfaces in Batteries

Carron (Scottish Exhibition and Conference Centre)
J. Lück (Helmholtz Institute Ulm (HIU), German Aerospace Center (DLR)) and A. Latz (German Aerospace Center (DLR), Helmholtz Institute Ulm (HIU))
Batteries based on a electrochemical lithium intercalation reaction are widely used and have many applications from costumer electronics to electromobility. Thus, insertion materials have attracted attention from practical aspects as well as fundamental interest in the exchange reaction occurring between the bulk electrode and the interface between electrode and electrolyte. Even though many reports have been published regarding bulk properties of electrolytes and insertion electrodes, like structural changes or diffusion and transport of ions in the electrode or the electrolyte, little is known about the processes at the electrolyte/electrode interface, like adsorption and desolvation on electrode surfaces. For deriving predictive models of batteries it is crucial to obtain a comprehensive understanding of the reaction mechanism taking place at the electrochemical interface.

Bruce et al. [1] proposed a 2-step-model for electrointercalation. Figure 1 shows this so called adatom model, where the fully solvated Li-ion in bulk electrolyte partially loses its solvation shell before getting adsorbed on the surface. Then it diffuses to a site, at which it can intercalate into the electrode. After this the adion loses the remaining solvent and gets incorporated in the lattice of the electrode. This proposed mechanism of a two-step-electrointercalation (desolvation/adsorption(=adion formation) and insertion) is confirmed for different insertion materials [2-4].

Considering some conversion materials like for lithium-sulfur-batteries, where Li-ions have to enter carbon spheres before reacting with sulfur, it's equally reasonable to assume first an adsorption step.

To include electrosorption, that is adsorption with partial desolvation, as an important step for intercalation and conversion reactions in batteries at the interface of a concentrated electrolyte and some active material, we derive equations for surface charges from thermodynamic and electrostatic considerations.

These derived equations are used as an intermediate step to couple the transport in the electrolyte and the solid phase with desolvation within a thermodynamic consistent reaction-transport model for Li-ion batteries [5]. Our developed model produces a reasonable coverage on the surface of the electrode while maintaining the transport properties of the cell. 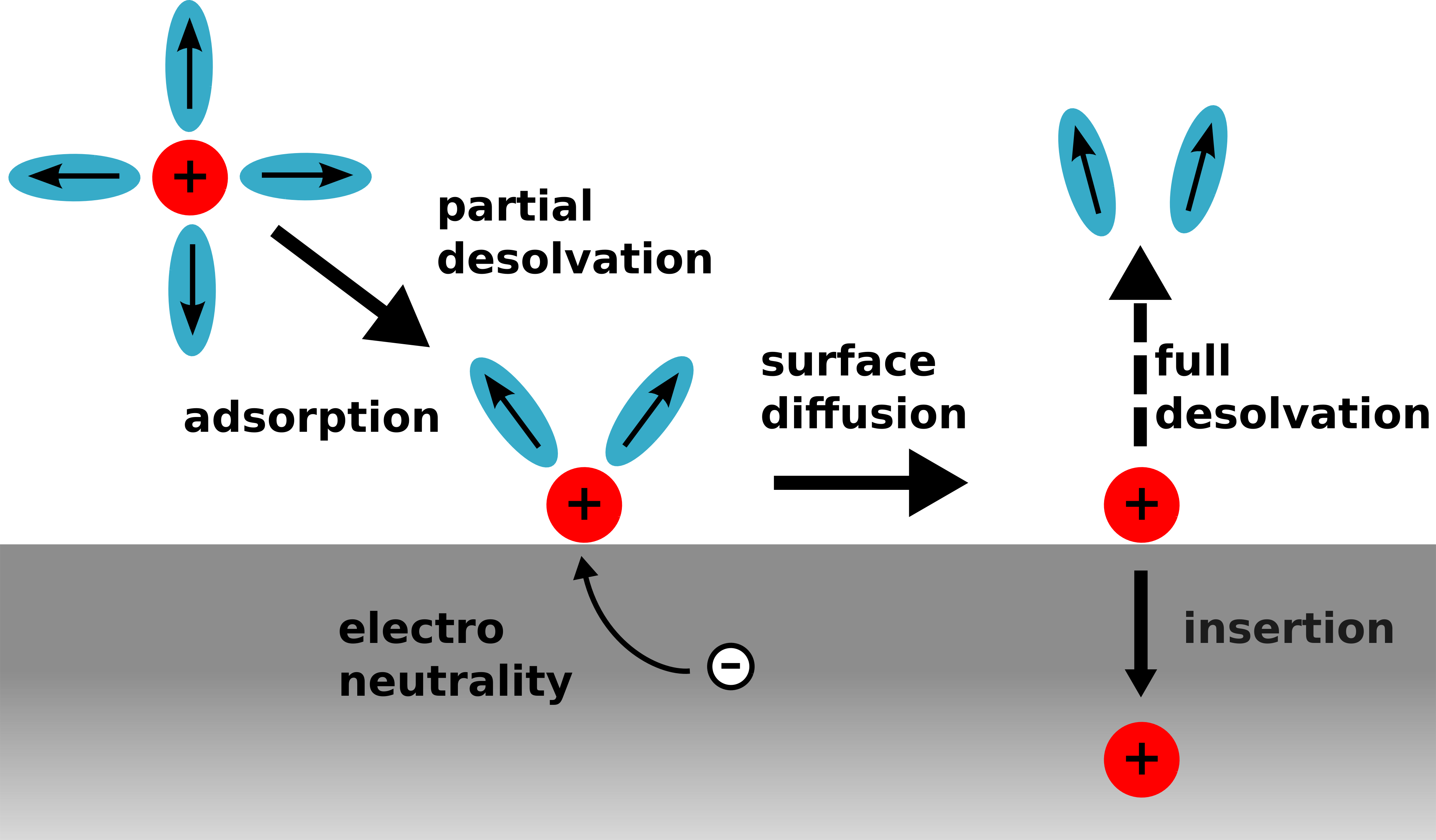