Lomond Auditorium (Scottish Exhibition and Conference Centre)
J. A. Cebollero, R. Lahoz, M. A. Laguna-Bercero, J. I. Peńa, A. Larrea, and V. M. Orera (Instituto de Ciencia de Materiales de Aragon)
Alternatively to electrode-supported configurations, electrolyte-supported solid oxide fuel cells (SOFC) are preferred in terms of mechanical robustness and resistance to redox cycles. However, the main inconvenience of this design is that electrolyte supported cells are prepared over 100–300 µm thick electrolytes and, as a consequence, they are designed to operate at high temperatures to reduce its ohmic resistance. The typical operation temperature of electrolyte supported SOFC is about 900 ºC for yttria-stabilised zirconium oxide (YSZ) electrolytes. A different alternative is to use laser machining to prepare thin self-supporting ionic conducting membranes. These membranes are obtained by laser machining of a thick and sintered ceramic plate. They consist of a thin central region, which is the electrochemically active area, surrounded by a thick zone, which acts as mechanical support. As both parts come from the same original sintered plate, they have unbeatable thermomechanical integration.

Laser engraving is being reported in the last few years as a very suitable technique for achieving cost-efficient production of high quality ceramic parts. It allows obtaining excellent shaping, versatility, accuracy and highly controlled surface finishing if compared with conventional abrasive techniques for ceramic machining. Using a commercial equipment that consists mainly of a λ=532 nm laser source and a galvanometric-controlled head, we have demonstrated that laser ablation within the nanosecond regime can engrave the surface of a conventional 150 μm thick 8YSZ plate (8 mol% Y2O3) by getting circular thin areas up to 20 μm in thickness and 8 mm in diameter. The membranes do not show problems of cracking due to thermal cycles in the final piece.

The thickness and surface quality has been characterised by confocal optical profilometry. Electron BackScattering Diffraction (EBSD) technique has been used to determine the in-depth profile of the residual strains produced by the laser machining. Within the accuracy of the technique used, most of the laser damage is limited to the first layer of YSZ grains, i.e. to the 2-5 µm most superficial membrane layer. Transmission Electron Microscopy (TEM), combining electron diffraction and Energy Dispersive Spectroscopy (EDS), has also been used to characterise melted particle ejection during the ablation process, as well as the mechanisms of resolidification and redeposition on the surface. These experiments confirm that laser debris redeposited over the membrane surface is mainly formed by nanometric particles with the same composition and crystalline phase as the 8YSZ original plate. Thus, this debris is not detrimental for obtaining a good electrolyte-electrode contact, but would also improve the electrochemical contact by increasing the electrolyte surface roughness.

Fig. 2.- TEM image and electron diffraction pattern of nanometric particles produced by the laser ablation of a 8YSZ ceramic plate. 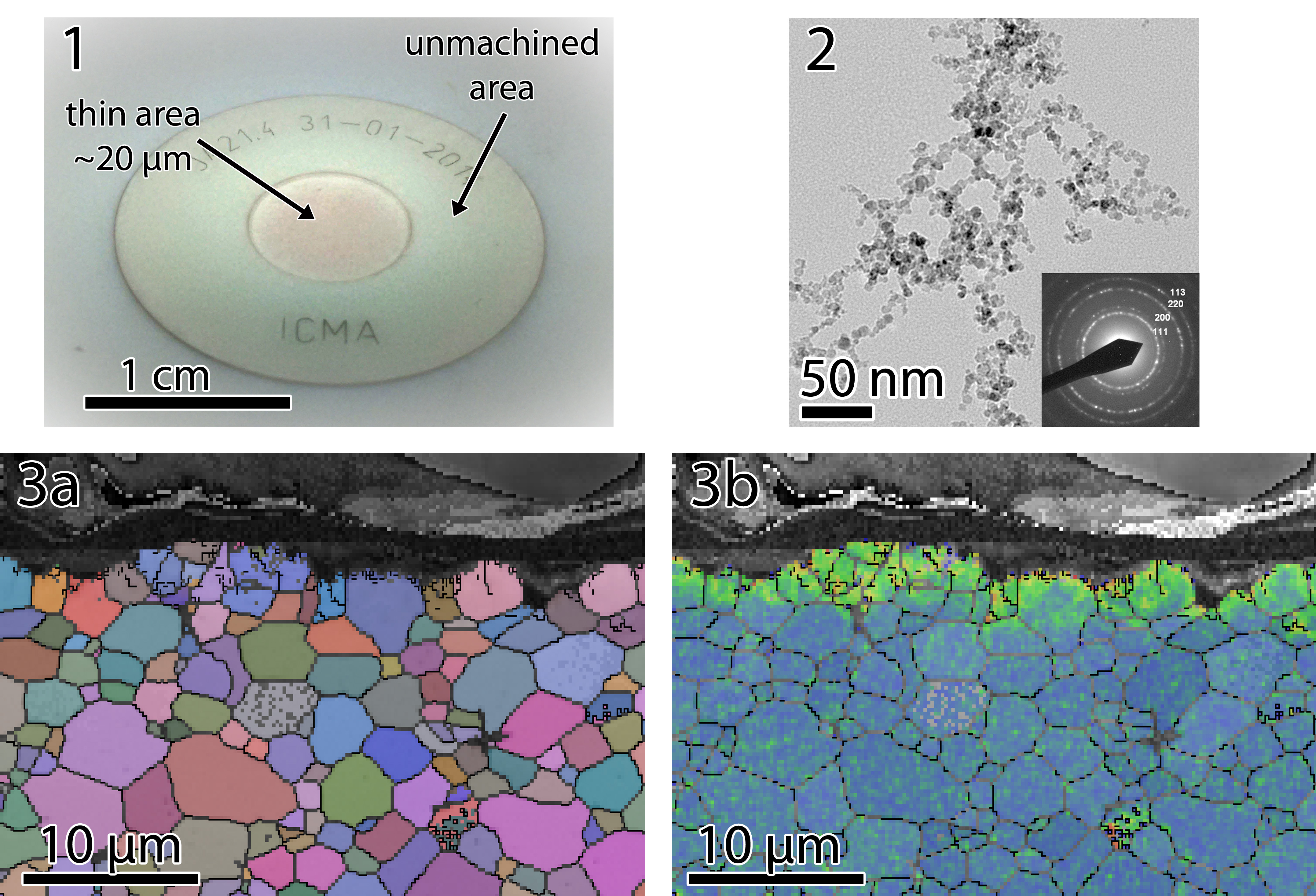