Lomond Auditorium (Scottish Exhibition and Conference Centre)
M. M. Hossain (University of Strathclyde), J. Myung (University of St Andrews), R. Lan (University of Strathclyde), M. Cassidy (University of St. Andrews), I. Burns, S. Tao (University of Strathclyde), and J. T. S. Irvine (University of St. Andrews)
Solid-oxide fuel cells (SOFCs) have received significant attention due to their high efficiency, flexible fuel selection, low emissions in exhaust gases and relatively low cost. The SOFCs are also an alternative energy sources which operate at high temperature fuel cell technology [1-2]. Unlike lower temperature fuel cells, any carbon monoxide (CO) formed is transformed to carbon dioxide (CO2) at the high operating temperature, and so hydrocarbon fuels can be used directly through internal reforming or even direct oxidation. Conventional SOFCs are also excellent devices for efficient power generation. However, they are facing various challenges to overcome high cost, durability problems related to materials degradation and particularly the interconnecting and sealing materials. Single chamber SOFCs and direct flame solid oxide fuel cells (DFFCs) [3-4] are also alternative SOFC concepts that do not face the sealing problem. But the potential explosion in a single chamber SOFCs could be dangerous as a fuel oxidant mixture is fed to the high temperature fuel cell, especially if operating conditions are not well-defined. This problem can be avoided if DFFC is used where the fuel and oxidant are mixed at the point of use in a flame removing the dangerous dead of explosive mix. Besides, the DFFC provides simple cell configuration, rapid start-up and no external heater required, and it is suitable for portable applications. But the performance of the DFFC is still relatively poor, which hinders its practical applications. Therefore, the studies of DFFCs are important for designing the DFFCs for practical applications and investigating the appropriate operating conditions as well as improving the cell performance.

In this study, a direct flame SOFC setup is designed and implemented based on fuel rich ethylene/air premixed flames to investigate the Ni-GDC (gadolinium-doped ceria) electrolyte supported fuel cell’s performance. The diameter of Ni-doped ceria anode and LSCF (lanthanum strontium cobalt ferrite)-GDC cathode layer is 10 mm and GDC-electrolyte is 20 mm. A flat flame burner (64 mm outer diameter) along with stainless steel stabilisation plate was used for the investigations. The stabilisation plate was placed above the burner surface and is used to stabilise the flame. The fuel cell was attached to the stabilisation plate in such a way that the anode facing to flame front and the cathode exposed to ambient air. Silver paste and wires were applied as current collectors to both sides of the fuel cells. Fig. 1 shows the schematic of the DFFC experimental setup. I-V (current-voltage), open circuit voltage (OCV), cell temperature and electrochemical impedance of the fuel cell were investigated under different operating conditions.

The cell temperature was measured using a fine-wire R-type thermocouple against different ERs and distances between the burner surface and the fuel cell. The thermocouple was located 2 mm below the anode layer. The temperature was found are in the range of 628 -700 °C for the distance separations at 15 to 30 mm. It was observed that the temperature was decreased with increasing the distances. It can be explained by the fact that flame shape is largely distorted by the distance and more soot was formed in the inner flame. Relationship between OCV and cell temperature at various distances is shown in Fig. 2. Highest cell temperature and flame stability were observed for the ER of 1.52 at the distance separation 15mm. The fuel cell also exhibits an OCV of 0.84 V with the same condition. It was also found that the position of the fuel cell with respect to the flame have a significant effect on the cell temperature and the performance. The fuel cell achieved a peak power density of 41 mW/cm2 and a peak current density of 121 mA/cm2with ER at 1.52 and temperature at 700 °C. In near future different hydrocarbon fuels (e.g., methane and propane) and fuel cells can be used for the further investigations over a range of operating conditions. 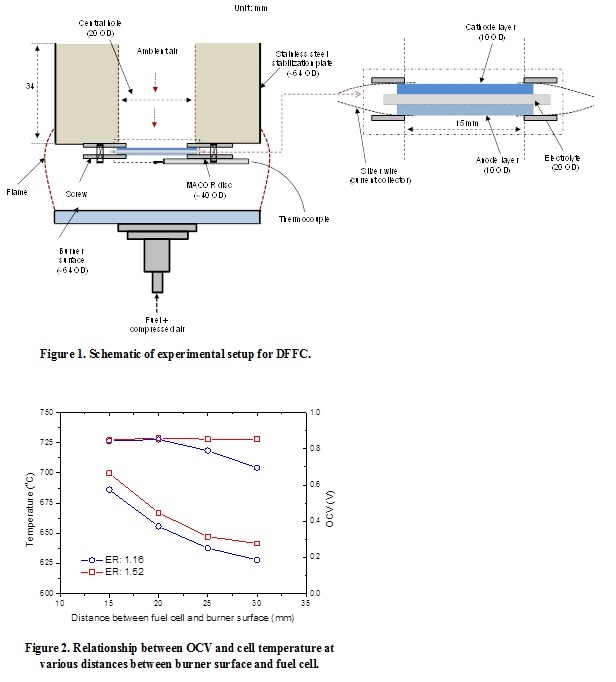